By Barry Holbrook: Eddie Hearn says heavyweight Derek Chisora could be in line for a big fight if he defeats Kubrat Pulev next month on July 9th.

Although Hearn isn’t saying who the 38-year-old Chisora ( 32-12, 23 KOs) could fight if he chins Pulev, it’s possible that he could be matched against Dillian Whyte or Deontay Wilder.

Both of those heavyweights are in their mid-30s and coming off knockout losses. Former WBC champion Wilder hasn’t won a fight since 2019, when he stopped 40-year-old Luis Ortiz.

Chisora will need to look good against Pulev to have a shot at fighting Whyte or Wilder because he’s lost his last three fights and looked poor.

Did Chisora look terrible in his last three bouts because he was facing Oleksandr Usyk and Joseph Parker, or is this a sign of age?

The former two-time heavyweight title holder Pulev (29-2, 14 KOs) and Chisora will be headlining on July 9th on DAZN at the O2 Arena in London, England.

Pulev, 41, was knocked out by Anthony Joshua in the ninth round in 2020, but recently he bounced back with a 10-round unanimous decision over Jerry Forrest last May.

Pulev must stand and fight

“We [Chisora] were going to fight Adam Kownacki. We agreed to terms. Chisora posted the contract when we still had a few things to tie up on the contract,” said Eddie Hearn to Boxing Social.

“People got involved with Kownacki didn’t want him to take the fight. The next thing, the fight was off, and then we thought, ‘F***, what are we going to do?’ We went through the world rankings, and Pulev was right there.

“I thought, ‘he’s not going to take the fight. He just boxed Jerry Forrest on Triller.’ Bang, straight in, and the fight got made with Frank Smith [of Matchroom Boxing]. We’re here and delighted.

“It’s a bigger fight than Kownacki, a bigger name, and a must-win for Chisora. Pulev is here, looks in great shape, and is very confident. It’s a great fight. I’m really looking forward to it.

“I think it’s going to be a great fight. Chisora never used to bring the heat really like he does now, and Pulev is not going to be comfortable just getting walked down and getting beaten up.

“So, he’s going to have to stand and fight as well. Of course, Pulev has a great European style. He’s going to try and stay upright and box Chisora, but Chisora can’t afford to do that,” Hearn said.

Chisora could get a big name if he wins

“Dillian Whyte against Pulev, there are really good fights. It’s only because Chisora has lost his last few against elite opposition [Oleksandr Usyk & Joseph Parker x 2] that you don’t put.

“When I mention those fights, everyone goes, ‘Oh, no, not Chisora.’ What happens if he chins Kubrat Pulev and knocks him out? Honestly, there is no plan. It’s so bizarre. I would have said to him after the Parker fight, ‘Do you want to fight again, have a 10-rounder?’ But he couldn’t be less asked to do that.

“He just wants a tear up, and that’s what he wants on July 9th. Do you think there would be criticisms if Wilder fought Pulev? I don’t think so,” said Hearn when told that boxing fans criticized him when he mentioned wanting to match Chisora against former WBC heavyweight champion Deontay Wilder.

“What happens if Chisora knocks out Pulev? Do you not think he deserves a big fight? People around Derek Chisora know where he’s at. He’s sparring well, he’s training well, he’s healthy, and he wants these fights,” Hearn said.

It’s still challenging to envision Wilder agreeing to fight Chisora if he beats Pulev. The three losses Chisora suffered before his contest against Pulev has hurt his popularity, and he’s now seen as a journeyman.

For Deontay to be taken seriously by fans, he’ll need to fight an actual contender and win impressively. Chisora isn’t s ranked contender at this point in his career, and he has nothing to offer Wilder.

Whyte would be the one that would be more likely to agree to a fight against Chisora because the two have already fought twice before in competitive matches.

Dillian needs a well-paying fight in which he would have an excellent shot at winning, and Chisora would serve the purpose.

The way that Whyte folded in his recent sixth-round knockout loss to WBC champion Tyson Fury on April 23rd, Chisora would have a good chance of knocking him out if he lands something clean.

Fury isn’t a big puncher, but he was still able to KO Whyte in the sixth round. If Fury can KO Whyte, Chisora can too.

Derek’s days of headlining could end

“Sooner or later, you’re going to have to make a call if he keeps getting beat,” said Hearn about Chisora no longer being a headliner if he loses. “Like if he gets beat by Pulev, we would turn around and say, ‘You can’t headline again because you can’t get in those kinds of fights of fights anymore.’

“So, he knows the pressure on this fight, but what he’ll always bring is entertainment. That’s what you look for, especially in a big heavyweight fight.

Surprisingly, Chisora is still headlining now after his three losses. In the U.S, there aren’t any fighters competing in main events with 12 defeats on their resumes like Chisora is in the UK.

When a fighter has that many defeats, they don’t headline in the U.S. The fact that Chisora is still fighting in main events shows the difference between the UK and U.S.

Still, as Hearn points out, if Chisora loses to Pulev, his days as a headliner will be over. That puts a lot of pressure on Chisora for his fight against Pulev. 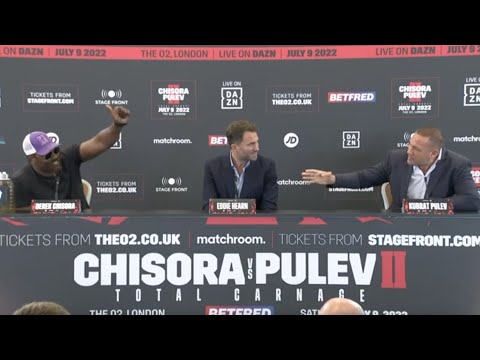