Stevenson said Rolly was “Not good” in his loss to Tank (27-0, 25 KOs), but he still had the contest even when referee David Fields stepped in to stop it in the sixth round.

We saw a flawed fighter in 27-year-old Tank that Mayweather Promotions has been doing an outstanding job of keeping his limitations disguised with careful match-making.

Afterward, Tank revealed to the reporters at the post-fight press conference that he’s staying with Mayweather Promotions, and you can’t blame him one bit.

If Chris Williams were a boxer, he’d want to be with that promotional team so he could be fed cannon fodder for easy money fights.

When you’re reduced to struggling to beat a ham & egger like Rolly Romero, that tells you what Tank Davis’ actual level is.

Of course, we already got a glimpse of Tank’s limits as a fighter in his two previous contests against Isaac’Pitbull’ Cruz and Leo Santa Cruz.

“I can’t really tell. It was an ugly fight, and it could have been either way, but Tank got him out of there with one shot,” said Shakur Stevenson to Fight Hub TV when asked how he saw the Tank Davis vs. Rolly Romero fight. 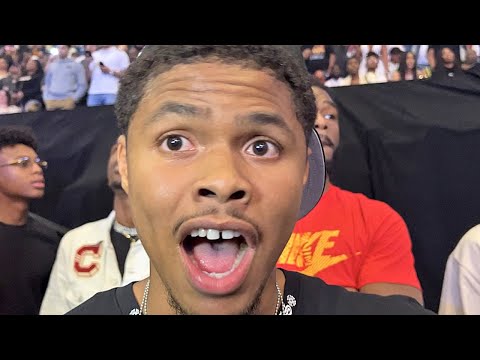 “Rolly is not good; he’s reckless,” said Stevenson when asked how Tank Davis set Rolly up with that shot. “He kept coming in reckless and had no respect, and he made him respect him.

“It was even to me. I don’t know how he [Tank] ain’t been catching him. Rolly kept coming in reckless; he really didn’t care. He looked like an MMA fighter.

“Who said that? I’m with it; I’m down,” said Shakur when told that Tank had said earlier this week that the other big fight that can happen in the 135-lb division is against Shakur Stevenson. “I think that’s the biggest fight in the sport of boxing.

“I think how they talk about Bud [Crawford] and Errol [Spence], I think me and Tank is that type of fight. So respect to Tank, but I’m definitely down for it.

“I can’t say no game plans, but it’s going to happen one day for sure,” said Shakur when asked how he’d break Tank down. “I know me and him are going to survive in this era, and I feel it’s going to be the biggest fight one day.

“So, I really can’t tell you the game plan. When it happens, y’all are going to see. I’m confident that I’ll beat anybody,” said Shakur when asked if he’s confident that he’ll beat Tank Davis.

Tank vs. Rolly went as expected

“The fight went exactly as 100% of us expected it to go,” said Shawn Porter to Fight Hub TV, reacting to Tank Davis knocking out Rolly Romero in the sixth round last Saturday night.

“I don’t think there were many people that expected Rolly to do as well as he did. I thought Rolly did exceptionally well. I gave him the second round, and I thought there were several other close rounds in the fight.

“I didn’t think Rolly would win one round in this fight, but he held his own. It was just a step behind, and then made a big mistake and paid for it,” said Porter about Rolando running into a big shot from Tank in the sixth round.


« Champions in the Ring Not Necessary Out of the Ring!