By Sam Volz: Jermall Charlo makes his fifth defense of his WBC middleweight title on June 18th against #5 Maciej Sulecki on Premier Boxing Champions event on Showtime at the Toyota Center in Houston, Texas. The card starts at 9:00 p.m. ET.

Sulecki is a slight bump up in talent from the last opponent Charlo fought in little-known Juan Macias Montiel. Although Sulecki doesn’t possess the chin or the power of Montiel, he’s a better fighter with more experience.

In Sulecki’s only two defeats against Demetrius Andrade and Danny Jacobs, he gave both of them a difficult time going the distance in a pair of 12-round decision defeats.

Sulecki came close to beating Jacobs in 2018, when ‘The Miracle Man’ was only 31 and still had something left in the tank. It wasn’t the old shopworn 35-year-old Jacobs we saw losing to John Ryder last February in London, England.

Sulecki has a chance to beat Charlo if he can make it to the second half of the fight, as the Texas native is beginning to show stamina problems.

Some boxing fans believe that Jermall isn’t living the life of a true fighter and that he is enjoying himself a little too much in between fights. As one of the nouveau riche, Charlo might have lost his edge as a fighter, and he’s there for the taking against any halfway decent contender at this point in his career.

It’s fair to say that if PBC puts Charlo in with a good fighter like David Benavidez, Gennadiy Golovkin, or Caleb Plant, he’ll lose badly and be found out.

Of course, that’s not likely to happen. Jermall will continue to be matched against flawed guys until he gets that big Canelo cash-out payday. Canelo is on the downside, and Jermall is too. It’s a fight where both fading guys will benefit.

Jermall has been dumped on by fans, who view the 32-year-old Sulecki (30-2, 11 KOs) as another example of the less aspiring of the Charlo twins in fighting a gimme opponent.

Showtime is willing to televise Jermall’s fights, and they don’t seem to mind that he’s fighting guys like Sulecki, Dennis Hogan, and Brandon Adams.

With most boxing fans being the casual variety, they’re not aware that Charlo isn’t fighting the cream of the crop. To them, they see Jermall as fighting the best, so they’re ignorant to the fact that his handlers are selectively matching him.

Depending on how things go with Canelo Alvarez in his September & December fights this year, Charlo (32-0, 22 KOs) is expected to face the Mexican star in the second half of 2023.

The Canelo payday fight that lies ahead for Jermall next year is likely why he’s fighting guys like Sulecki instead of David Benavidez because he can’t afford to get beaten right now.

Charlo vs. Sulecki undercard on Showtime:

“Sure, if the knockout comes. I’m one of the best finishers in boxing,” said Jermall Charlo to Fighthype when asked if he wanted to try and knockout Maciej Sulecki on June 18th.

“He tries to compare me to two people [Demetrius Andrade and Daniel Jacobs] that he lost to,” continued Jermall. “He might feel he wants to avenge his losses through me, and that’s because he knows I’m better than the other guys, so he tries to downplay me.

“He’s going to find out when he steps in the ring with me that he’s going to have to make some serious adjustments. I’ll make sure I dictate and keep him tame.

The opposition that Charlo has fought since moving up to 160 is less than spectacular, which is why he’s a world champion now. He can beat these fighters, but not the talented fighters like Golovkin, Demetrius Andrade, or Janibek Alimkhanuly.

“I’ve got the best jab in boxing right now. Not only do I knock people down with it, but I’ve also won fights with just my jab one time. I broke the jab hand and still used it, and it was still damaging. I’ve got one of the best jabs. It’s all about the movement and how I place it,” said Charlo.

Jermall does have an excellent jab, but his stamina is poor, and his chin is weak. 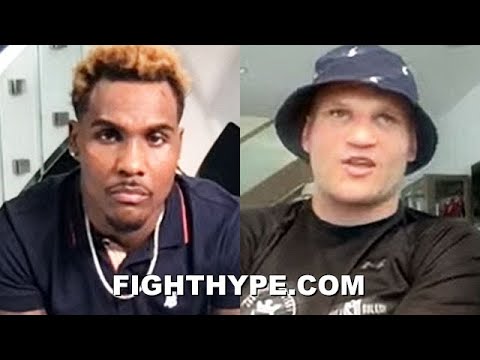