By Sam Volz: Floyd Mayweather Jr’s exhibition match against little-known sparring partner Don Moore has been postponed due to the passing of the United Arab Emirates president. No date has been given for the match rescheduling between 45-year-old Mayweather and Moore.

The Mayweather-Moore exhibition was supposed to have taken place on Saturday in Dubai at a helipad; with the death of the UAE president, there will be a three-day shutdown.  The undercard had some other older fighters in 47-year-old Anderson Silva fighting Bruno Machado and 38-year-old Badou Jack.

It’s unclear whether the Mayweather vs. Moore event was selling on PPV. There was almost no buzz at all about this exhibition match, and it was pretty obvious why. After Mayweather’s huge fight against MMA guy Conor McGregor in 2017, he’s done nothing interesting since. That fight was a huge disappointment for many fans in terms of entertainment.

It was even more boring than Floyd’s previous match against Andre Berto in 2016, and that fight looked like a gloried sparring match, as did Mayweather’s previous fight against Manny Pacquiao.

Given the lack of interest from boxing fans on social media, you can argue that Mayweather would be better off forgetting the whole thing and starting from scratch. If the aging Mayweather continues to peddle his exhibition matches to the public, he at least needs to fight guys that fans have heard of.

It’s unclear what Mayweather thought when he chose to fight his ex-sparring partner Moore, but he needs to do better. If the idea is for Mayweather to continue to sell exhibition fights into his 50s and 60s, he should focus on former world champions.

These would be great options for Floyd:

Some of those guys would likely beat Mayweather, but it wouldn’t count on his 50-0 record due to it being an exhibition. If the idea is for Mayweather to continue bringing in money for as long as possible, he will need to raise the bar.

In Floyd’s last exhibition, he fought YouTuber Logan Paul in an eight-round match that had no winner. The fight consisted of most clinching, jabbing from Mayweather, and slapping punches. It was not an entertaining fight in the true sense unless you’re the type that enjoys watching two fighters hold.

After the fight, Mayweather said, “He’s better than I thought he was. He’s a tough, rough competitor.”

Floyd has a net worth of $450 million, according to Celebrity Net Worth. With that kind of money, why is Mayweather choosing to take part in exhibition matches against little-known guys like Moore? Is Mayweather that worried about losing? It’s very, very strange. 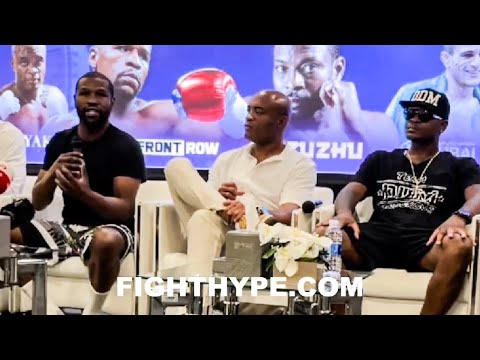 
« Tyson Fury IS retired says SugarHill, “I’m NOT going to say anything different”

Ricky Hatton predicts Canelo will take the Bivol rematch, believing he can win »