In the final thirty seconds of the second round a left hook from DeCarolis hurt Scardina who managed to get to the end of the round. In the third round Scardina came back using an effective jab to take the round. 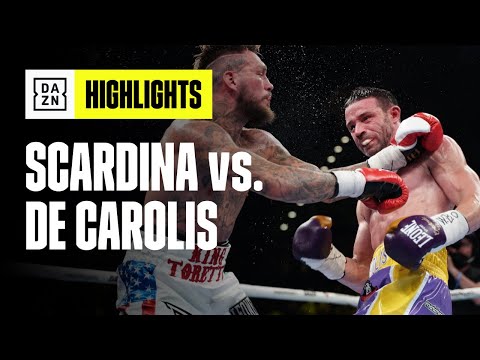 In the fourth round with thirty seconds remaining DeCarolis landed a  right followed by four punches the final a left hook to the chin as  Scardina was falling to the canvas. He was up on unsteady feet as Referee Manuel Oliver Palomo gave him an 8-count who for some reason allowed him to talk to him. DeCarolis jumped all over Scardina landing a right to the chin when the referee for some reason stepped in and allowed Scardina to walk to his corner as time ran out with DeCarolis following him to the corner thinking the fight was over.

In between rounds the referee started talking to one of the judges. In the fifth round DeCarolis came forward landing a pair of rights the second an uppercut followed by three more punches dropping Scardina who as he got up the referee wisely waved it off.

In the first three rounds Romero moved well with hands to his side sticking his jab in the face of the oncoming Prodan almost at will. In the first minute of the fourth round Romero landed lead rights to the body of Prodan. Romero continued boxing well frustrating Prodan.

In the fifth round Prodan plodded following Romero around the ring getting hit with a three punch combination halfway through the round. Seconds later Romero landed another combination. Romero had Prodan missing more than landing. A minute left in the round Prodan landed a left to the chin hearing the crowd cheering him. In the final ten seconds Prodan landed a solid left hook to the chin dropping Romero face first into a corner for an 8-count from Referee Giavonni Florentino as the bell sounded.

In the first three rounds Romero had her way being the aggressor. In the fourth round due to a clash of Romero’s head on the chin of Cecchi she was cut on the top of the head causing blood to run down the left side of her face.

In the fifth and sixth rounds of a sloppy fight with plenty of clinching Romero continued holding an edge. In the seventh rounds closing seconds Romero put Cecchi into the ropes facing the crowd and hit her from behind several times. Cecchi purposely head butted Romero to the canvas as they were being separated by the referee who took points from Cecchi.

Scores were all 80-72. Referee was Giovanni Poggi.

In the second round Enache landed his first notable punch an overhand right on the chin of Birardi causing him to fall into a clinch followed with several rabbit punches and receiving a warning with seconds remaining in the round. In the third round Birardi continued dancing around with hands to his side jabbing Enache.

In the fourth round after thirty seconds Enache landed a jab and hook to the chin of Birardi knocking him back several steps. With a minute remaining in the round an overhand right from Enache rocked Birardi drawing blood from his nose and having him holding on. In the fifth round Birardi came back well, out landing Enache. In the sixth and final round both were warned by Referee Eros Rozza for hitting behind the head. It was a close round in a close fight that Birardi may have pulled out.