By Chris Williams: In a painful defeat, Yordenis Ugas suffered a fractured orbital bone in his right eye in his tenth-round technical knockout against Errol Spence Jr. in their 147-lb unification match last Saturday night.

ESPN is reporting that the 35-year-old former WBA welterweight champion Ugas (27-5, 12 KOs0 suffered a fractured right orbital bone in losing to IBF/WBC champion Spence (28-0, 22 KOs). The injury was diagnosed at the John Peter Smith Hospital in Fort Worth, Texas.

As of now, surgery isn’t required but that could change depending on how Ugas’ eye looks after the swelling goes down.

It would be a big disappointment if Ugas requires surgery in the way that former WBO super middleweight champion Billy Joe Saunders needed after suffering a fractured orbital bone in his eighth-round stoppage loss to Canelo Alvarez last year.

With that type of injury, Ugas could be out of action for an extended period. On a positive note, when Ugas does return, he’ll be in a position to go after one of the four titles once they’re vacated by the Spence vs. Terence Crawford winner. Both champions are expected to move up to 154 in 2023.

It’s believed that the Cuban talent Ugas suffered eye injury in the seventh round when Spence unleashed a massive left uppercut. Almost immediately after the shot landed, Ugas’ right eye began to swell.

To his credit, Ugas bravely fought with the injury despite the swelling getting steadily worse from the seventh until the bitter end in the tenth.

Thankfully, that was when referee Lawrence Cole wisely stopped the action to have Ugas’ injured eye examined by the ringside doctor. The fight was then waved off at 1:44 of the tenth.

At the time of the stoppage, Ugas’ right eye was completely shut, and the left side of his face was also badly swollen. It’s unclear how much visibility Ugas had out of his left eye, but it looked like a squint.

This is the second big star that Spence injured. In 2017, he stopped Kell Brook in a fight in which he suffered an eye injury.

“There was no timidness. I was fighting to get a knockout,” said Spence at the post-fight news conference. “I think that’s my style. I made adjustments on the fly.”

Spence would like to fight WBO champion Terence Crawford next for the undisputed championship if they can get the match negotiated. 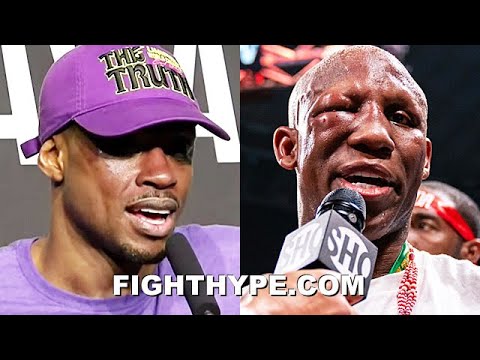