Valdez vs. Stevenson will have Ring Magazine 130-lb title on the line

By Jim Calfa: Oscar Valdez & Shakur Stevenson will have the Ring Magazine super featherweight title on the line this Saturday when they battle it out in a unification bout in a Top Rank Boxing promoted show.

Having the Ring Magazine 130-lb title at stake will go along nicely with Valdez’s WBC title and Shakur’s WBO strap that they’ll be fighting over when they fight in the headliner at the MGM Grand Garden Arena in Las Vegas.

“No, I’m going in there, pick him apart and mentally drain him,” said Stevenson about his intentions in not getting hit in the fight.

Style-wise, Valdez & Stevenson represent fighters from the opposite sides of the spectrums. The former two-division world champion Valdez focuses on pleasing the crowd, looking to go to war with his opponents.

Stevenson focuses on hitting & not getting hit back. He chooses not to stay in the pocket after throwing a single shot to achieve that. He’s more of a hit & run type of fighter, and he sometimes is booed by the fans due to his defensive focus.

“All fighters dream of considering being one of the best, being a Sugar Ray Leonard, be a Roberto Duran, an Oscar De La Hoya,” said Oscar Valdez to Top Rank Boxing. “When we retire, we want to be one of the best out there. That’s my goal.

“To be in those big names, you’ve got to fight guys like Shakur Stevenson. He has a belt, I have a belt, and one person is going to come out with two belts that night,” said Valdez. 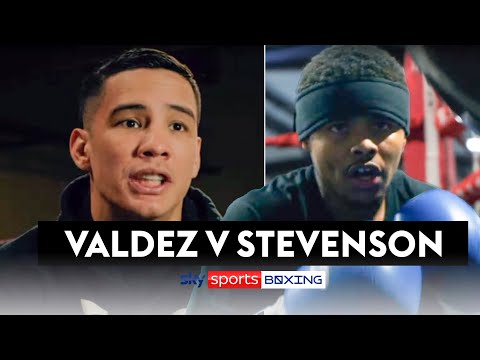 
« This isn’t the end for Dillian Whyte says Eddie Hearn