Parker feels that Fury checks all the boxes for talent and sees him having too many offensive skills for Whyte, who turned 34 today. Fury is “too smart” for Dillians, says Parker.

Whyte is coming off a 13-month layoff since his fourth-round stoppage win over 42-year-old Alexander Povetkin in March 2021. Before that, Whyte had been knocked out in five rounds by Povetkin in August 2020.

Whyte was supposed to fight last October against Otto Wallin, but he pulled out due to a shoulder injury.

Some boxing fans believe that Whyte chose not to go through with the risky fight against the big 6’6″ Swedish heavyweight Wallin once he realized he would be getting a title shot against Fury.

Unsurprisingly, Wallin was less than happy about Whyte pulling out, and he wanted to reschedule the fight, but unfortunately, nothing came of it.

There’s still quite a bit of speculation whether Whyte (28-2, 19 KOs) will show up for the fight on the night, as he didn’t take part in the press conference launch, leaving Fury out there on his own.

Whyte choosing to pull out of the fight wordlessly would be the ultimate passive-aggressive move on his part to send a message.

Many boxing fans aren’t quite sure whether Whyte will be there on April 23rd to challenge Fury has put a damper on things.

Without Dillian taking part in the promotion, it’s left doubt in fans’ minds whether he’ll take the fight.

It’s difficult not to see this ultimately hugely hurting his career, but if he does take the fight, he’ll get that last payday regardless of the outcome.

“I feel [Tyson Fury] has too much for Whyte – size-wise, power-wise, strength,” said Joseph Parker to Frank Warren TV.

“He can move, he can fight, and so I think he’s going get Whyte out of there in the first six rounds,” Parker continued.

“Dillian’s got a very strong counter left hook. I got caught with it once, and it put me down, so [Fury] has to be wary of that. But I think Tyson, overall, is too smart.”

Whyte is up against it in this fight, and he’s probably going to need a knockout to win against the big 6’9″ Fury. Unlike Dillian’s last fight, he’s not facing a guy that just came off a bad case of Covid-19.

Fury is expected to be healthy, and it could be a very long night for Whyte if he performs in the manner he did or his last two fights against Deontay Wilder.

Although a lot has been said about the top guys Whyte has fought to earn a title shot, the truth is, he had it easy, beating Oscar Rivas by a 12 round decision in a WBC title eliminator in 2019.

Suppose Dillian had to fight a high-caliber heavyweight like Filip Hrgovic, Andy Ruiz Jr, Frank Sanchez, Joe Joyce, or Daniel Dubois. In that case, it’s highly questionable whether he would be getting a title shot. Rivas was a gimme-level fight for Whyte.

“You don’t want a big 290-pound guy laying a punch on you. I just think he’s going to be a headache for a lot of people, but more than anything, he’s a personality. Boxing lacks personalities, and we have for a long time.

“The fact that the heavyweight division is the most glamourous division and talk the way he talks and entertains people, I’m looking forward to him having a long reign because it’s good for boxing,” said Mancini. 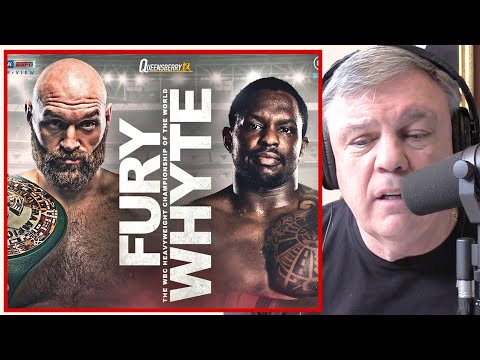 
« Stanionis, Butaev, Benn: An important Saturday for the future of the Welterweight Division