By Jeff Aronow: Tim Bradley says Oscar Valdez has a powerful left hook that he can knockout Shakur Stevenson if he comes into Saturday’s fight “overconfident,” thinking about how he wants to become a star.

The two-time Olympian Valdez (30-0, 23 KOs) is the wrong guy from Stevenson (17-0, 9 KOs) to be treating him with disrespect, lumping him in the same category as the 17 opponents the New Jersey native has fought as a professional.

Bradley still thinks Stevenson has a 98% chance of winning on Saturday, but that 2% chance that Valdez has is based on his power, and he can get himself out of trouble at any point in the fight.

If Stevenson gets careless in the tenth or eleventh on Saturday night and begins showboating in front of the crowd, thinking the fight is over, Valdez can lay him out with one of his big left hooks like he did against Miguel Berchelt.

“Try and frustrate Shakur a bit. Shakur likes to have his way too,” said Tim Bradley to Fight Hub TV on what Oscar Valdez needs to do for him to have a chance of beating Shakur Stevenson on Saturday night.

“I think the type of performance he needs to have is like Castillo did against Mayweather. Valdez has ten championship fights. Stevenson has four,” Bradley continued. “He has experience over Shakur, and you can’t buy experience.”

It’s going to be a little harder for Valdez to duplicate what Jose Luis Castillo did against Floyd Mayweather Jr in their first fight because Stevenson backs out quickly after throwing a punch.

He’s not like Mayweather, who stood and fought Castillo, albeit against the ropes. Stevenson will never stand still if he believes there’s any chance Valdez will attempt to hit him.

“The thing is with Valdez, a lot of times his left hook gets him out of situations,” said Bradley. “My gosh. If Shakur gets overconfident, and I don’t think he will, but if he does become overconfident because he wants to put on a spectacular performance. That’s on his mind, ‘I want to become a star.’ He can get caught.

“Oscar can set him up while he’s allowing him to hit him. ‘Hit me,’ and then boom out of nowhere. That left hook comes out so damn fan, so accurate, so on point, and it’s damaging.

“We can say he’s got some dog in him. He can say it all he wants, but when he gets in that situation, how is he going to react? I don’t know, but Valdez has got to land that shot. Both guys are smart and know how to make adjustments. They’re Olympians,” said Bradley. 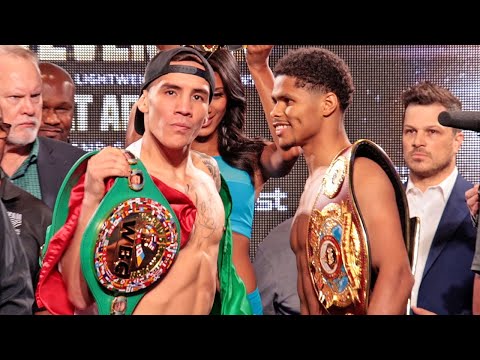