By Jack Tiernan: George Kambosos Jr. says he’d like to fight Gervonta ‘Tank’ Davis after watching him in person in his last title defense.

The unified lightweight champion Kambosos says he saw “a lot of holes” in Tank Davis’s game in his title defense of his WBA ‘regular’ belt against Isaac ‘Pitbull’ Cruz last December in Los Angeles, California.

Tank (26-0, 24 KOs) is scheduled to defend against Rolando ‘Rolly’ Romero next month on May 28th on Showtime PPV at the Barclays Center in Brooklyn, New York.

For his part, Kambosos (20-0, 10 KOs) will have his IBF, WBA, WBC Franchise & WBO lightweight titles at stake against WBC champion Devin Haney in June 4th.

If Tank and Kambosos win their next fights, they’ll be freed up to battle it out in a mega-fight on pay-per-view. The only issue is that Tank likely wouldn’t be open to the idea of facing Kambosos in Australia the way Haney is.

“The lightweight division is the best division in the world, and from my hard work, dedication and discipline, I’m the top dog,” said George Kambosos Jr. to Fighthype. “I’m still the underdog, but I’m the top dog, and that’s fantastic.

“Tank is a very good fighter. I think he’s going to absolutely destroy that other guy [Rolando ‘Rolly’ Romero]. I’m not sure what his name is. Romero, who that guy is,” said Kambosos.

“I don’t really pay attention to that guy, but you see things pop up and who are you? Because you train at the Mayweather Boxing gym, you’re supposed to be somebody. You’re a nobody,” Kambosos said about Rolly.

“You should have lost a few fights ago [against Jackson Marinez], not that I watched the fight, but everybody said on social media that you got gifted a decision. Tank should handle him pretty easily.

“That’ll be the end of him. You’ll never hear about him again,” said Kambosos about Rolly Romero. “I would love to fight Tank. Like I said, I think he’s a good fighter.

“I was there ringside watching his fight against Isaac Cruz in Los Angeles. A lot of holes, a lot of holes [in Tank]. We’ll see. I’m focused on one guy [Devin Haney] right now. I’m zoned on only one guy,” said Kambosos. 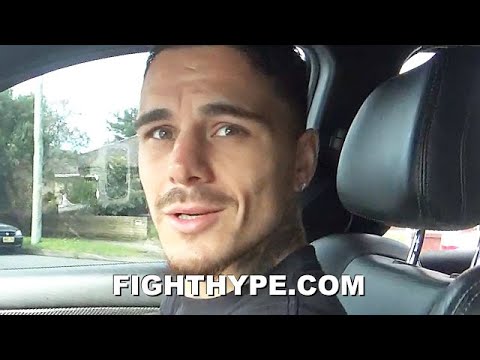 Spence not worried about KO of Ugas, just wants the win »