By Jim Calfa: Conor Benn will be “off the leash” and ready to take on the elite in the 147-lb division if he successfully defeats veteran southpaw Chris Van Heerden this Saturday night, says promoter Eddie Hearn.

Benn and Van Heerden (28-2-1, 12 KOs) will be meeting in the main event this Saturday, April 16th, live on DAZN at the Manchester Arena in Manchester, England.

For Benn, this will be the first fight of his six-year career in which he’ll be facing a southpaw. Hearn feels it’s vital that Benn get the experience against a southpaw before meeting other talented southpaws like Errol Spence Jr and Terence Crawford.

The Matchroom Boxing promoter Hearn states that he wants to have the 25-year-old unbeaten Benn (20-0, 13 KOs) fight one of these tier-2 elite welterweights in the summer:

Of that group, Hearn is confident that he’ll get one of them to agree to face Benn in the summer. Hearn sounded less than optimistic that Ugas or Thurman would be Benn’s next opponent by his tone.

The fighter that Hearn seemed to be the most animated about was 35-year-old Kell Brook, coming off a big win over Amir Khan last February. Mikey Garcia and Danny Garcia probably might be longshots as well for Benn.

Mikey & Danny don’t view themselves as stepping stone-level fighters, so Hearn will be barking up the wrong tree if he attempts to get one of those former stars to face the young lion Benn.

Interestingly, Hearn no longer mentions Adrien ‘The Problem’ Broner or Maurice Hooker when talking up Benn’s next fight. Those two had been fighters that Hearn had frequently talked about wanting Benn to face, but not anymore.

“It has to be [a huge fight in the summer for Conor Benn]. He’s 20-0, and I think the progression of Conor Benn has been perfect,” said Eddie Hearn to iFL TV about Conor Benn’s fight this Saturday night against inactive welterweight Chris Van Heerden.

“I love this fight for a lot of different reasons,” Hearn said of the Benn – Van Heerden contest on DAZN. “Van Heerden is very experienced, tough, and he’s a good fighter, and he’s also a southpaw.

“This is Conor Benn’s first southpaw he’s faced in his entire career, and when you look at the quality of the southpaws who are at the elite level 147 pounds, you can’t go into a fight like that never having faced a southpaw before.

“So, I feel like this is the perfect fight for him. I said to Conor the other day that it’s a real compliment to Benn that people are almost overlooking Van Heerden like the opponents are not good enough because it was only a year ago that people were saying, ‘you’re overrated.’

“The way he’s dispatching these guys and he’s fired up to dispatch Van Heerden, but Van Heerden is made of tough stuff. He’s a proper tough fighter, an experienced fighter, and I expect him to be there deep in the fight. Conor doesn’t, but I do,” Hearn said.

“I think if he can dispatch Van Heerden in the same kind of style that he did [Chris] Algieri, then he’s ready,” Hearn continued. “We don’t need to keep the shackles on him anymore. We don’t need to hold him back, and we don’t need to say, ‘Oh, no, you’re not ready.’

“Let him off the leash to go and take on the elite in the division. Now, there are two different types of the elite. There’s Mikey Garcia, Danny Garcia, Kell Brook, Adrien Broner, and then there’s Terence Crawford, Jaron Ennis, maybe Vergil Ortiz.

“Those other guys, [Keith] Thurman, [Yordenis] Ugas, these are major steps for Conor Benn, but we’ve got to take them. I think the time to do it is following a successful victory over Chris Van Heerden.

“Of all the names I mentioned, I don’t think Crawford and all those guys [should be next]. I think his [Benn] next opponent should come from the likes of [Amir] Khan, [Kell] Brook.

“It won’t be Khan next anyway because he won’t be ready, but Brook, Mikey Garcia, Danny Garcia, even Keith Thurman. He wants to fight Ugas and Conor, and if he gets beat by Spence, then maybe that’s an opportunity as well.

“He needs a big fight in the summer, but let’s see how he gets on this Saturday,” Hearn said of Benn about his test against 34-year-old Van Heerden this Saturday night at the Manchester Arena.

“These are the kinds of fights and banana skins that can disrupt those plans. Not really because a year ago or less, he [Benn] was overrated. Now, Algieri, Van Heerden, and all those guys,” Hearn said when asked if he understands WHY Benn is being heavily criticized about the opposition he’s been fighting,” said Hearn.

“If I go back 18, 19 months ago in Chris Van Heerden’s last fight, he headlined on Showtime against Jaron Ennis,” said Hearn. “That was Jaron Ennis’ 26th fight. This is Conor Benn’s 21st fight. I rate Jaron Ennis as one of the best welterweights in the world.

“So, I think it’s flattering for Conor that people see him as a massive, huge favorite against Van Heerden. The tricky thing in this fight is the southpaw. That’s the obstacle in this fight. He’s got to overcome that southpaw style,” said Hearn.

The reason boxing fans are critical of Benn fighting Van Heerden now is pretty simple. Jaron ‘Boots’ Ennis beat Van Heerden like a drum in their fight in December 2020 before the contest was halted after the first round due to the South African suffering a massive cut on his forehead from a clash of heads.

The way the fight was going, Ennis would have likely stopped Van Heerden in the second round because he was taking terrible punishment.

Now two years later, with Van Heerden, 34-years-old and inactive since his fight with then 22-year-old Boots Ennis, his chances of beating or even surviving against Benn are virtually nonexistent.

The Benn-Van Heerden fight is a clear cherry-pick on Conor’s part, and it’s NOT flattering that the fans are critical of the battle.

Hearn needs to wake up, smell the coffee, and realize the boxing public is catching on to what he’s doing by matching Benn against old-timers.

“It’s not a tricky southpaw style, but it’s still a southpaw, and it’s the first one he’s faced in his entire career,” said Hearn about Van Heerden. “You need that kind of grounding. You need to face those variations, especially if you’re going to face an elite southpaw.

“I think it’s a very good fight. You’ll see when you speak to Van Heerden. He’s an emotional guy, he’s been through a lot, and he’s going to be fired up for this opportunity. It’s going to be a really good fight,” said Hearn. 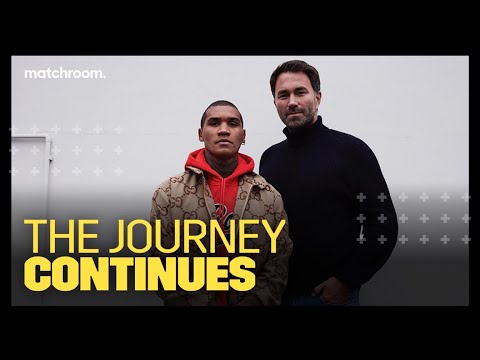