By Jim Calfa: Shakur Stevenson says he believes he’s got an excellent chance of stopping WBC super featherweight champion Oscar Valdez in their unification fight next month on April 30th.

While it wouldn’t be a shock for WBO champion Shakur (17-0, 9 KOs) to win a decision over the undefeated Valdez (30-0, 23 KOs), scoring a knockout would be a major accomplishment.

Attempting to KO Valdez would make the light-hitting Stevenson vulnerable to his bigger punches, and it could backfire on him.

Stevenson should focus on fighting his game, which is the pull-back Mayweather-esque style that he’s used since his amateur days.

If Stevenson tries too hard to get a stoppage in this fight, he could run into one of Valdez’s powerful left hooks and get taken out like Miguel Berchelt.

We saw Stevenson stunned by a hard jab from Jeremiah Nakathila last year in June. It stands to reason that if Nakathila could hurt Stevenson with a hard jab, Valdez can do a lot more with one of his left hooks.

“I think the key to winning this fight is who wants it more,” said Shakur to Fighthype on his match against Valdez. “I feel like I want it more than him, and I feel like skills are going to play a part.

“I feel like I’m way more skillful than him, so I’m going to show out on April 30th. You got to look at it like he got a lot of miles taken off of his career with all those wars he’s been in with,” said Shakur about how Valdez fought Scott Quigg with a broken jaw in March 2018.

“I can get him out of there. That’s a big possibility. I think y’all should start looking at that. We’re going to see where the fight goes, but I’m telling you, don’t count me out when it comes to that.

“Tune in on April 30th, Stevenson vs. Valdez, the biggest fight in boxing. I’m turning into a superstar, let’s do it,” said Shakur.

Stevenson has the advantage in defensive boxing skills, but not in terms of offense. Valdez is much more equipped for combat on the front foot than Stevenson, whose power is on the level of Devin Haney.

It’s got to be frustrating for Stevenson to see popular lightweights like Gervonta ‘Tank’ Davis scoring knockouts and looking at all the money he makes. Tank is a different type of fighter.

He’s blessed with both power and speed, but not so much with his defensive ability. Stevenson has the opposite. No power and average hand speed, but excellent defense skills due to his reflexes and foot movement.

In the same interview, Stevenson said that he would beat Canelo Alvarez if he were the same size as him. Stevenson is probably right. Canelo doesn’t throw a lot of punches, and he telegraphs his shots because of his bad habit of loading up on everything.

“I never really watched Bivol, so I can’t tell you,” said Shakur when asked about his thoughts on the May 7th fight between Canelo Alvarez and Dmitry Bivol. “When I watched him, he was a solid boxer.

“Right now, you’ve got to be great to beat Canelo. I feel like only the great fighters will beat Canelo. If Andre Ward was still boxing, I would say, ‘Andre Ward.’ Other than that, I don’t really see too many people out there around his weight,” said Stevenson about Canelo.

“Oh, yeah, Benavidez. That would be a good fight, though. It’ll be a really good fight. Other than that, there’s nobody really around his weight that can compete with him,” said Shakur about Saul Alvarez. 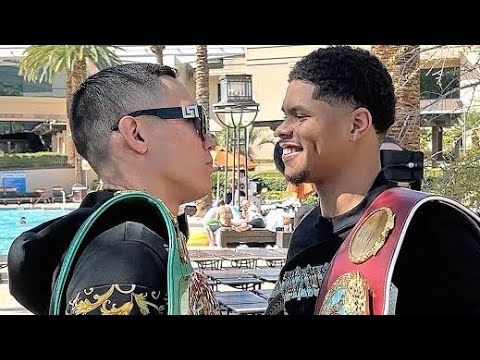