Hearn says he’ll be speaking with Usyk’s promoter Alex Krassyuk tonight and this weekend to get the fight finalized and the date + location for the rematch.

Usyk (19-0, 13 KOs) has been busy defending his country Ukraine in response to the month-long invasion by Russia. The 2012 Olympic gold medalist Usyk has decided to leave his country to begin training for the rematch.

Hearn had said this week that late June is the deadline for the Joshua-Usyk II rematch, and if it didn’t happen, Joshua would take an interim fight to stay busy while he waited.

Usyk to take the rematch

Given the huge ramifications on the line for the rematch in terms of money and prestige, it makes sense for Usyk, 34, to take the fight because it’s an ideal situation for him.

A second victory for Usyk over Joshua will put him in a position to face WBC heavyweight champion Tyson Fury for the undisputed championship later this year.

“I’m almost certain this fight takes place in June,” said Eddie Hearn to iFL TV about the Joshua vs. Usyk 2 rematch. “I’ve got more calls with Alex Krassyuk tonight and this weekend where we’re starting to finalize the date and the venue, but we got to the point where we said, ‘we need to know.’

“It appears that the decision has been made that this fight will take place in June. We’re over the moon, and I believe Usyk will be moving into camp soon to begin to prepare for this fight,” continued hearn on the Joshua – Usyk II rematch.

Will Joshua retire if he loses?

There will be a lot riding on the line for not only Usyk in this fight but particularly with Joshua. The former #1 heavyweight on the planet, Joshua, has lost two out of his last four fights, and he can’t absorb another defeat without his career going up in smoke.

With Joshua’s fierce warrior spirit and pride, he might not be able to swallow another defeat at the hands of the smaller fighter Usyk, and it’s quite possible he’ll retire afterward.

It’s fair to say that if Usyk humiliates Joshua by knocking him out in their rematch in June, the 6’6″ former champion will call it a day. Joshua has had a great run during his nine-year professional career and has much to be proud of. He can revel in what he’s done during his successful career, and live well with the reported $80 million that he’s made.

“I can confidently tell you that as of yesterday or whatever day that it was, we’ve been told that they [Team Usyk] want to progress with the fight and move forward.

“Really, in the next two weeks, the fighters are going to want to get into camp. Let’s see them get into training camp, and let’s see them give everybody the biggest fight of the year,” said Hearn.

As you can see, Hearn is ecstatic about the news of Usyk choosing to take the rematch with Joshua. Let’s hope for Hearn’s sake that he keeps the same upbeat attitude if Joshua is soundly beaten again.

It won’t be the end of the world for Hearn if Joshua gets beaten again, but obviously, he’ll have some major questions to ask of himself about who he’ll replace him with.

Conor Benn doesn’t appear to be the guy, as Hearn hasn’t shown the confidence to match him against world-class opposition. 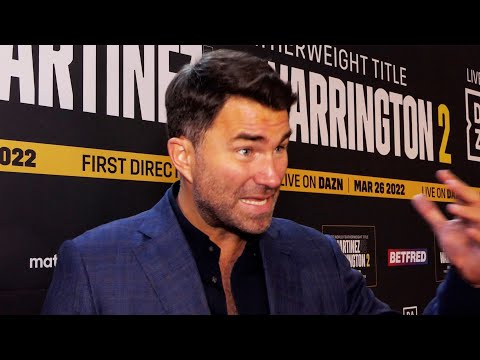 
« Willie “Will o’ the Wisp” Pep The Best of The Little Men!