By Huck Allen: Rolando ‘Rolly’ Romero says Canelo Alvarez picked Dmitry Bivol to fight next because he’s the “easiest one” to fight at 175 for his next match-up on DAZN pay-per-view on May 7th.

Canelo (57-1-2, 39 KOs) will be looking to become a two-time light heavyweight champion when he challenges the unbeaten Bivol (19-0, 11 KOs) for his WBA title at the T-Mobile Arena in Las Vegas.

Three years ago, Canelo moved up to 175 and defeated WBO light heavyweight champion Sergey Kovalev by an 11th round knockout to become a four-division world champion on November 2, 2019, at the MGM Grand in Las Vegas.

The 31-year-old Bivol is a little younger than Kovalev was at the time he fought Canelo three years ago, so it could be a little more complicated this time.

What’s interesting is that Canelo hasn’t bulked up yet for the Bivol fight. In looking at Canelo’s recent video, he’s still roughly the same size as he was for his last fight against Caleb Plant last November.

When Canelo moved up to 175 to challenge Kovalev for his WBO title in 2019, he packed on a lot of muscle for that fight, looking vascular almost like a bodybuilder in appearance.

To try and maintain that size would have been difficult for Canelo, so he wisely moved back down to 168.

“Canelo vs. Bivol; I feel like Canelo is going to destroy him because Canelo destroys everybody,” said Rolly Romero to Fighthype. “I’m not taking anything away from Bivol. If Canelo took the fight, that means Canelo is going to win.

“There were a lot of other options. So Canelo took the fight, that means he found that was the easiest one,” said Rolly in hinting that Saul is a cherry-picker.

“If he fights, I’m taking Canelo,” Rolly said when told that boxing fans are pushing for Canelo to face David Benavidez next. “You cannot take Canelo in every single one of these fights.

“If you take Canelo, there’s a 95% chance you’re going to win. It doesn’t matter who he fights. Canelo could go fight Tyson Fury, and somehow he’s going to win by a decision. I’m not going to say he won the fight, but there’s a lot of money behind Canelo right now.

“Maybe Tyson Fury is a bad example. He [Canelo] could go right at cruiserweight right now, and I guarantee you that Canelo is going to win. Yeah, Canelo can pretty much fight anybody and he’s going to win,” said Rolly about Canelo being able to beat David Benavidez and Tyson Fury.

It almost sounds like Rolly has a bad case of hero-worship when it comes to Canelo. He obviously isn’t going to beat Fury, and it’s questionable whether he can beat David Benavidez. By not fighting Benavidez, Canelo doesn’t need to worry about losing.

“I respect him as a man. Everybody talks about his body shots, but I think his best punch is his left hook. That left hook is snappy fast. He just throws that s***,” said Rolly about Canelo. “I think that’s his best punch.

Maybe Canelo won’t like Rolly saying that he learned from Mayweather because he lost that fight.

Whatever Canelo did learn, it was small stuff with the shoulder roll and upper body movement. Canelo can’t duplicate the mobility that Mayweather once had, and his willingness to get in the thick of things.

Rolly (14-0, 12 KOs) has a fight on May 28th against WBA ‘regular’ lightweight champion Gervonta ‘Tank’ Davis (26-0, 24 KOs) at the Barclays Center in Brooklyn, New York. The fight will be shown on Showtime PPV. 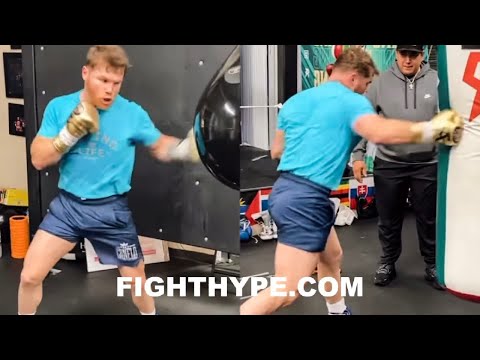