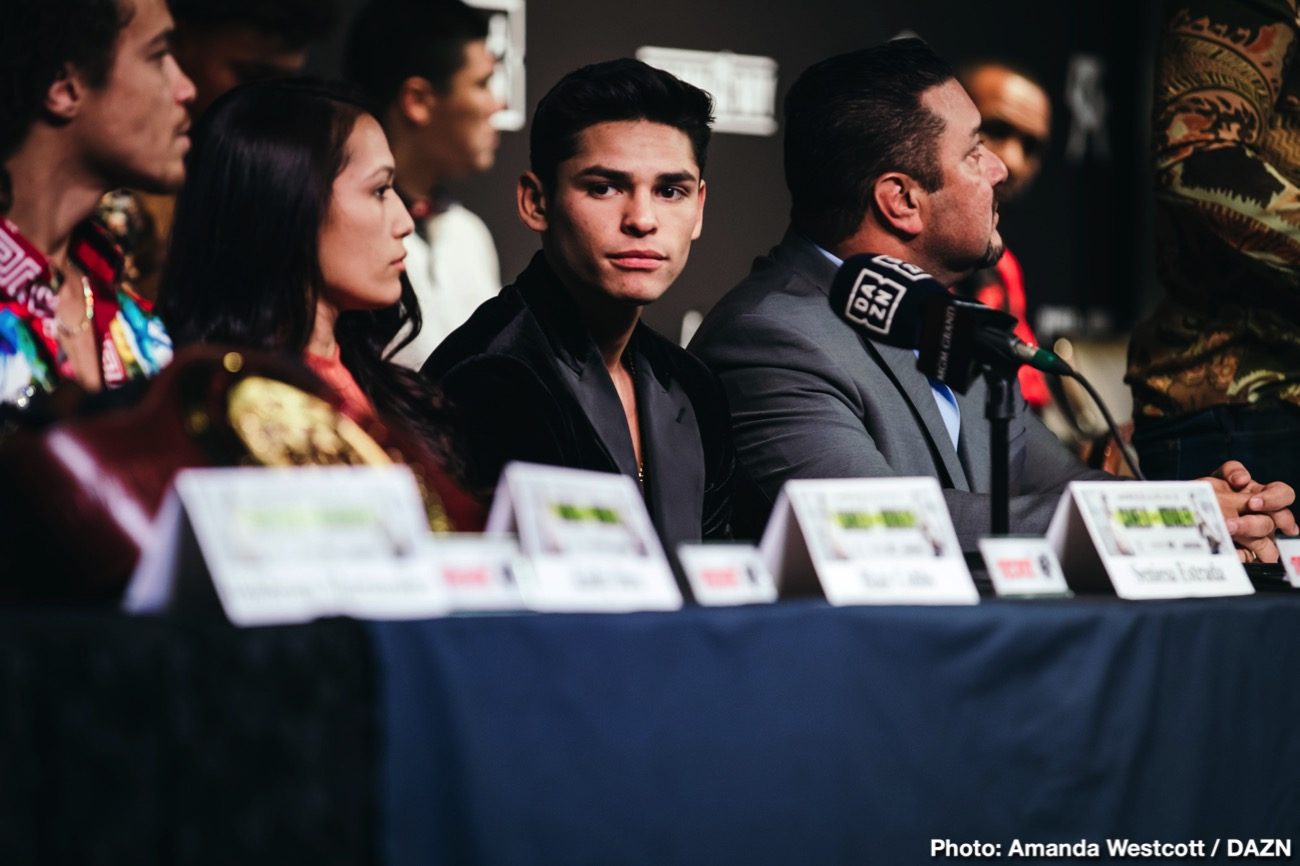 By Sean Jones: Ryan Garcia rates former three-belt champion Vasily Lomachenko as the #1 fighter at 135 and current undisputed champion George Kambosos Jr. at #2 in the division despite holding four belts.

Interestingly, King Ryan has Devin Haney and Gervonta ‘Tank’ Davis as tied at the #3 spot in his rankings.

The unbeaten Ryan Garcia (21-0, 18 KOs) is in talks to fight Isaac ‘Pitbull’ Cruz for April on DAZN. If that fight happens, we’ll see whether Ryan belongs among the top 135-pounders in the division.

Choosing Pitbull Cruz (22-2-1, 15 KOs) is a bold move by Ryan and his promoters at Golden Boy Promotion, but it shows how serious he is in wanting to show fans that he’s not a sickbay commando who pulls out of fights on a moments notice for this or that.

If Ryan beats Pitbull Cruz in style, it’s going to go a long way towards resurrecting his career because many fans have already given up on the 23-year-old, seeing him as a lost cause.

Even Pitbull says that he sees Ryan as more focused on Instagram and posting videos than on his boxing career.

“Loma No. 1. Then I would say Kambosos No. 2 and Devin and Tank a toss-up. They both had pretty mediocre performances,” said Ryan Garcia to World Boxing News in ranking the top lightweights

It would be nice if Kambosos were to pick Lomachenko as his next fight. That way, the fans could discover if his win over the injured Teofimo Lopez were due to him being a great talent or if it was a situation of him taking advantage of a fighter that should have been in the hospital that night on November 27th.

Unfortunately, the chances of Kambosos’ promoter Lou DiBella choosing Lomachenko as his next opponent are slim.

DiBella knows what will happen if he lets Lomachenko fight Kambosos, so he’s not going to bother entertaining that fight unless it’s forced on him with the World Boxing Organization ordering it. Kambosos would stand no chance of beating Lomachenko because he’s a much better fighter, and he won’t be injured and weight drained like Teofimo.

The inclusion of Kambosos (20-0, 10 KOs) is a questionable one for Ryan in slotting the Australian at #2 because he only has one win over a credible fighter during his career, and that was against an injured & weight drained Teofimo Lopez Jr. last November.

That win wasn’t proof that Kambosos belongs at #2 in the lightweight division because of the way that Teofimo looked in that fight; he would have been beaten by many fighters from both the 135 and 130-lb divisions.

“Close fight. I still gave it to Tank by a round or two,” Ryan said of Gervonta’s narrow win over Pitbull Cruz on December 5th. “I think Tank gave him too much respect in the opening rounds.

“For some reason, he was trying to box him when in my mind – and I don’t want to give away my game plan – but just know there won’t be a lot of that because the guy’s aggressive, but what can an aggressive fighter do going backward?

“Nothing. And I think once Tank did pressure him, what happened? He looked like he was going to get him out of there until Tank, I guess, hurt his hand.”

The reason why Tank Davis was boxing Pitbull Cruz is that he was taking too much punishment on the inside, and he was getting worn down from the body shots.

If Tank hadn’t started boxing Cruz in the second half of the fight, he would have been knocked out. It would be a good idea for Ryan to learn from Tank Davis’ performance that it’s not wise for him to slug with Cruz.

Garcia, who is currently inactive for an entire year, doesn’t include himself among the top fighters in the 135-lb division due to the 12 months that he’s been sitting on the sidelines since his win over Luke Campbell in January 2021.

Gary Hegyi – “The Man Behind the Scenes” Back in the Day in Philly! »