By Ken Hissner: At Tashkent, Uzbekistan, over DAZN, Dmitry Ivanov (World of Boxing Promotions) and Eddie Hearn (Matchroom Boxing), presented in the Main Event Israil “The Dream” Madrimov WBA No. 2 ranked Super Welterweight from Uzbekistan being declared the winner at the end of the ninth round though the time was never established by the ring announcer. 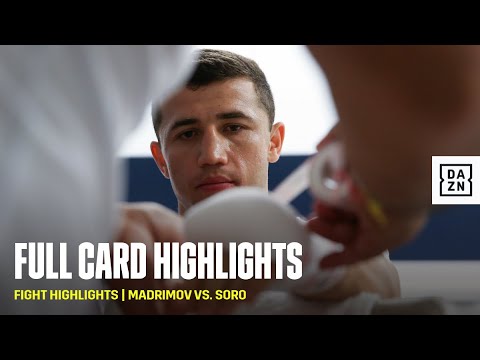 In the first round, Madrimov had a slight edge, while in round two, it was Soro having an edge. In the third round, Soro continued to box well as Madrimov used an effective overhand right but sparingly.

In the fourth round, Soro started well in the first two minutes, but Madrimov took over in the final minute with a flurry of punches having Soro going backward. In the fifth round, Soro was doing well and got away with tossing Madrimov, who came out southpaw for some reason, to the canvas without warning. In the second half of the round, Madriov landed a solid overhand right on the chin of Soro, having him backing up the rest of the round on the defense.

In the sixth round, Soro caused a bloody nose from Madrimov with a good offense of punches. Madrimov was warned in the final thirty seconds of using his head. In the seventh round, both fighters had their moments. Soro was doing well with his jab and occasional rights on the chin of Madrimov during this part of the round. In the final minute, Madrimov took over with a flurry of punches getting the attention of Soro, who spent the rest of the round going backward.

In the eighth round, while Soro started off well in the first minute, Madrimov again finished the final minute well. Between rounds, Soro’s trainer Abel Sanchez seemed to let him know he needed to finish better.

In the ninth round, it went back and forth, but in the final seconds, Madrimov had Soro out on his feet, then landed half a dozen punches after the bell before referee Salvador Salva of Spain stepped in and waved the fight off. Trainer Abel Sanchez of the corner of Soro rightfully complained to the referee about the stoppage happening after the bell.

The ring announcer, who left a lot to be desired after all the confusion, asked the fans, “do you want to know who won the fight?” Then announced it was Madrimov without giving the time of the stoppage showing it must have been after the round, or he simply didn’t know when it was stopped. It was a poor result even though Soro was badly hurt at the time of the stoppage. This writer had it 77-75 in favor of Madrimov after eight rounds, with Madrimov taking the ninth round.

In the first round, the taller Giyasov kept coming forward, rocking Coria after a minute of the round with a left hook to the chin. He continued outworking Coria, who was returning to the ring after almost a year to the day, having suffered a knockout loss. In the second round, with forty seconds remaining after being beaten, Coria landed a left to the top of the head, knocking down Giyasov, but for some reason, the referee didn’t rule it a knockdown, possibly thinking he had his foot stepped on by Coria.

In the third round, Giyasov switched to southpaw at times. In the final half-minute, both landed punches on the chin at the same time as the action picked up from both fighters. In the fourth round, at the halfway point, Giyasov landed a left to the chin of Coria, hurting him forcing him to back up and go on the defense.

In the eighth round, Giyasov continued outworking Coria. With a minute remaining, the referee warned Giyasov for showboating after he did a winding-up motion with his right hand. Coria then took to the offensive though not enough to take the round. In the ninth round, it was more competitive though Giyasov took the round ending it with more showboating doing a shuffle with his feet.

In the tenth and final round, Coria came out knowing he needed a knockout went on the offense for the first half of the round before Giyasov once again took over.

In the first round, the former southpaw Olympian coming off a knockout loss in June Melikuziev chased the reluctant and taller Ekimov easily taking the first two rounds. In the second round, Ekimov would cover up like he was about to be knocked out, only throwing occasional lead rights.

In the third round, Melikuziev worked the body, especially with a right, with at times follow-up lefts to the head of Ekimov. In the fourth, Melikuziev continued to outland Ekimov, who continued to be in a survival mode.

In the fifth round, with thirty seconds remaining, a lead left from Melikuziev to the body dropped Ekimov for an 8-count. Melikuziev was warned for hitting on the back of the ducking Ekimov by the referee in the final seconds of the round.

In the sixth round, Melikuziev continued an offensive assault on Ekimov. In the final thirty seconds, he drove Ekimov to his knees, and for some reason, the referee didn’t consider it a knockdown.

In the seventh round, Melikuziev continued following Ekimov around, throwing punches at will, mostly to the body. Ekimov would keep his hands high, which he has since the opening round, and at times go into a crouch as if he was going down but never did.

In the eighth and final round, Melikuziev continued to live up to his nickname “Bully’ having his way against Ekimov with rarely made an attempt to win the fight but to be in a survival mode the entire battle. Melikuziev easily won every round.

In the first round, after thirty seconds, Dusmatov landed two looping lefts to the chin of Rivas, and down he went for an 8-count. He continued his offensive assault but couldn’t hurt Rivas again. In the second round, Rivas, the taller of the two, shows little offense while Dusmatov easily takes another round coming forward, mostly landing body shots.

In the third round, Dusmatov continued outworking Rivas but didn’t land an effective punch until the final seconds when he landed a lead left on the chin getting the attention of Rivas. In the fourth round, Rivas finally took to the offense for the first minute before Dusmatov took over halfway through the round. A clash of heads caused a cut on the bridge of the nose and on the right eyebrow of Rivas in the final minute of the round.

Before the start of the fifth round, the Rivas corner refused to come out of the corner as his cut-man continued to apply pressure to the cuts of Rivas.

With well over 100 amateur fights, of which Dusmatov won 93 contests, he looks like a fighter with a solid future with only four contests.