By Mark Eisner: WBO welterweight champion Terence ‘Bud’ Crawford (38-0, 29 KOs) overcame a fast start by former IBF/WBC 147-lb champion Shawn Porter (31-4-1, 17 KOs) to come back and stop him in the 10th round on Saturday night at the Mandalay Bay Resort & Casino in Las Vegas.

Crawford knocked Porter down twice in the tenth round and surprisingly, Shawn’s corner halted the fight. The bout was halted officially at 1:21 of round 10. 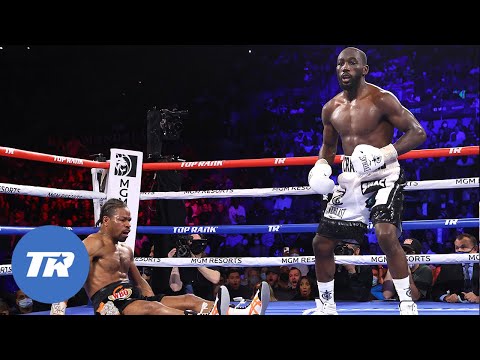 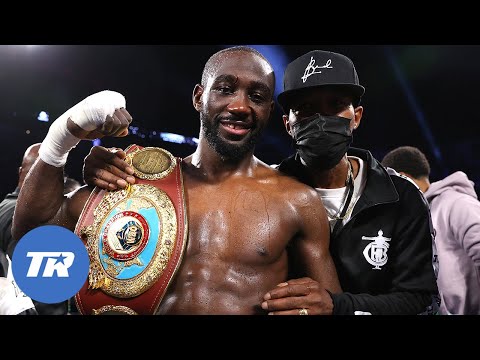 WBO welterweight champion Crawford (37-0, 28 KOs) has been labeled as a product of careful match-making by his promoters at Top Rank, who have been unable to put him in with the best fighters until now.

Tonight is the proving ground for Crawford, and he cannot afford to slip up if he wants to place himself as the #1 welterweight and #1 pound-for-pound.

Crawford is no longer being avoided

“A lot of these guys didn’t want to fight you. In the meantime, Canelo is the money man and he’s getting all these boxers in the ring,” said Max Kellerman to ESPN.

“Now when people ask me [who the best fighter is in boxing], I say the following: ‘I suspect Bud Crawford is the best pound-for-pound fighter in the world, but recently, I just don’t have the evidence to make the case.

“Shawn Porter just crossed the street to fight you, and that helps give you that evidence depending on how you look at that fight,” said Kellerman to Crawford.

“First and foremost, as I’ve been saying all along, there’s no street, so I don’t know why everybody keeps saying ‘the street,'” said Crawford to ESPN.

“What do you mean by that because when people say, ‘The street,’ they mean another network, so there’s an economic reason to separate the fighters over there from the fighters over here,” said Kellerman to Crawford.

“It’s a street with a barbed-wire fence,” said Kellerman.

Terence ready to prove himself

“You never hear anybody else saying, ‘He’s on the wrong side of the street,’ but Terence Crawford,” said Crawford. “Me and Shawn Porter are going to get in the ring and I’m going to show everybody that I’m the best fighter in the world.”

“So, what does that feel like to finally get one of these guys [Porter] to say, ‘Yes, I’ll get in the ring’ with you. How do you feel about that?” said Kellerman.

“I feel great,” said Crawford. “A lot of people have been talking, saying I haven’t fought anybody at the welterweight division. Everybody I’ve been fighting thus far was either has been or broken or some type of excuse.

“So here we are with Shawn Porter, one of the elite fighters in the welterweight division and we’re going to see how he fares against me,” said Crawford.

“An athlete’s prime is not very long,” said Kellerman. “They’ve got to get while the getting is good, but there’s also legacy. You’re considered a great fighter and you’re going to be in the Hall of Fame one day.

“Does pound-for-pound mean something to you? When hear them saying automatically the best pound-for-pound, do you get feelings behind that? ‘Time out, I got to prove something against Porter.'” said Kellerman to Crawford.

“Not at all,” said Crawford. “Like I said, Canelo earned that spot right now being that he just conquered the whole [168-lb] division within a year [editor’s note: It took Canelo three years to conquer the 168-lb division. He captured his first title at 168 in 2018].

“I said it depends on my performance this weekend,” said Crawford. “If I go in there and look spectacular and get Shawn Crawford out of there, we have a discussion to talk about.”

“Speaking about getting them out of there. When you were a lightweight, you were a boxer-puncher,” said Kellerman to Crawford.

“You could stay in the pocket, make guys miss, switch southpaw, orthodox, analyze them, break them down and get them every which way, back foot, coming forward, going side to side, the whole package.

“I would describe you as a welterweight now, you’re more a puncher-boxer, meaning you’re looking primarily to inflict damage.

“You still have got your skills, but it seems more offensive-oriented. Is that right because for some guys, it means you could get hit more now. Is that right or wrong?” said Kellerman.

“Well, I just think it’s the type of fight that I’ve been accustomed to doing in the welterweight division,” said Crawford. “They’re a bit slower, so they tend to get hit more as well. We shall see this weekend.”

Pavlik predicting a dogfight for Crawford vs. Porter

“He’s great for boxing. This is going to be an interesting fight. This is one of the few fights where I’m picking a winner,” said former middleweight champion Kelly Pavlik to Fighthype.

“I want to sit back and enjoy it from a fan’s standpoint. Porter has not ever been in a bad fight. He’s never really gotten dominated by anybody, and he’s fought the top guys.

“Aside from Canelo, he [Porter] has one of the best resumes in boxing,” said Pavlik. “So it’s going to be interesting to see what happens. Crawford is a fantastic fighter. He can mix it up, and he has great game plans and he’s really skilled and it’s going to be fun, especially in the later rounds.

“You’re going to see a dogfight. As soon as Porter gets hit with a big shot, it’s going to turn into a dogfight. Porter is strong, he’s naturally big for that weight class, so that’s going to be a problem for Crawford,” said Pavlik

Late rounds to decide the fight

“Crawford has also shown that he can change his game plan and make things happen,” said Pavlik. I think it’s going to be a really entertaining fight, and the last couple of rounds are going to be a deciding factor just like Spence and Porter.

“When I was younger on the amateur scene, I was closer to Porter, but he ended up going to Vegas. I still follow him. We’re Ohio boys, and you can’t take that away from us. The Ohio boys made some noise in boxing. I think he’ll do great, but I’m a fan of Crawford too, though.

“It’ll be interesting, and I’m going to sit back and watch this fight and just enjoy the boxing. If I pick somebody and I’ve been doing really well on my picks but I get s*** for it,” said Pavlik.

Terence ‘Bud’ Crawford is ready to prove his doubters wrong tonight to stamp his spot as the #1 pound-for-pound by beating the well-seasoned Shawn Porter in a convincing manner in their match on ESPN+ pay-per-view.