Teofimo Lopez: ‘I have no game plan for Kambosos’

By Matt Lieberman: Teofimo Lopez says he doesn’t have a specific game plan for his title defense against George Kambosos this Saturday night on November 27th at MSG in New York.

Teofimo (16-0, 12 KOs) states that he plans on just going out and executing the unbeaten Kambosos (19-0, 10 KOs), and then afterward, he says there will NOT be any handshakes for him and his training team.

The Australian fighter has hit Teofimo’s last nerve, and he wants to put the cocky IBF mandatory Kambosos, 28, in his last when the two battle it out in the main event on DAZN.

For Teofimo, 24, he says he wants to prove to himself that he is the fighter he believes himself to be after capturing the WBA, WBC Franchise, and WBO lightweight titles with a 12 round unanimous decision win over Vasily Lomachenko on October 17th, 2020.

“Whatever they’re trying to do, mind games or whatever, it doesn’t matter. We’ve been there and done that,” said Teofimo to Boxing Social. “What they [Team Kambosos] don’t understand is that makes me even more excited.

“I dislike him absolutely, so I don’t want no handshake,” said Teofimo on him not wanting a handshake from Kambosos after he beats him on Saturday.

“It hypes me up even more and boosts me to a whole another level. I’m going to put on a show for everybody on Saturday night,” said Teofimo.

To listen to Kambosos talking during the press conference, he sounds more like the champion than Teofimo. The confidence that Kambosos possesses, you can’t buy.

He’s someone that has a firm belief in himself, and it seems to have bothered Teofimo.

Although Kambosos hasn’t beaten anyone of note during his career, he carries himself like someone with a resume filled with wins over big names.

In reality, the only two notable names on Kambosos’ resume are Lee Selby and Mickey Be. Those two guys are old and past it..

Teofimo must win this fight because he’s bigger fights against possibly Devin Haney, Josh Taylor, and Gervonta ‘Tank’ Davis over the horizon.

Teofimo could have made more money fighting an immediate rematch with Vasily Lomachenko, but he stuck it out is going with the minor match against Kambosos.

“I’m just looking forward to putting on a show. I don’t have a game plan for Saturday night. I just got to do what I got to do,” said Teofimo.

“I’m looking forward to reminding myself who I still am, and that’s the undisputed unified lightweight world champion,” said Teofimo. 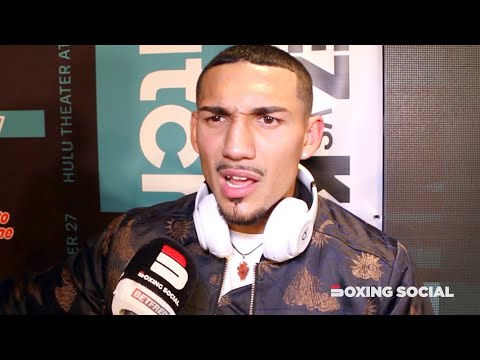