Afterward, Hearn wasn’t sure if either of those two fighters should take a rematch with their opponents because of what they went through physically and mentally.

Interestingly, Hearn stated that he believes Galahad will win the rematch with Martinez, which was a bit surprising given what we’d just witnessed. Charles Brun believes Galahad should stay away from Martinez or any big puncher for his next fight to play it safe.

Galahad (28-2, 17 KOs) has a big decision to make on whether to face the 35-year-old former IBF super bantamweight champion Kiko Martinez (43-10-2, 30 KOs) in an immediate rematch after being dropped twice and knocked out in the sixth round in the main event.

Martinez looked like he held back with his power during the first four rounds, but in the fifth, he tagged the 31-year-old Galahad with a tremendous right hand that knocked him flat on his back. It was surprising that Galahad got up from the knockdown because he was clearly out of it.

You could observe the drunken look on Galahad’s face that he was in no condition to continue fighting.

Unluckily for Galahad, there were only five seconds left in the round, which allowed him to escape without taking another punch. But there was no way on earth that Galahad would recover between rounds because he was too hurt.

Ideally, Galahad’s trainer should have recognized that he wouldn’t recover sufficiently to carry on in the next round.

Nevertheless, Galahad was sent out for the sixth round and immediately knocked on his backside from a peach of a right hand from Kiko.

This knockdown was far worse than the previous one, though, as Galahad had his hands down and looked defenseless. Martinez put everything he had into that punch and did total damage.

The referee immediately stopped the fight, and Galahad’s trainer rushed into the ring to peel him off the canvas.

“It was the most stunning thing I’ve seen in 35 years of watching boxing,” said Eddie Hearn to Boxing Social in reacting to Kiko Martinez’s knockout win over Kid Galahad last Saturday night in Sheffield.

“It was a total domination [for the first four rounds by Galahad]. We got a lot of stick about the fight, but Kiko is brilliant. He will not give up, and he will always try to win, but I didn’t expect him to win the fight.

“The fight was a domination. I was expecting Twitter to light up and say, ‘Oh, what a mismatch,’ and it was, I can’t lie, until that moment [in the fifth round]. In the first one, it was lucky for him [Galahad] that there were five seconds left in the round.

“I actually went to Tweet as he got off the stool and heard the ‘Oohs,’ and when I watched it back, it was worse, the second knockdown; a huge haymaker of a right hand. Kiko Martinez makes history tonight; Spanish boxing is flying.

“I thought he was done after he got up, but then when I looked up and saw five seconds and saw him go back to his stool, I expected him to recover,” said Hearn about his thoughts after seeing Galahad dropped in round five.

“He may have recovered, by the way, but regardless of whether he’d been knocked down previously or not, that second right hand would have done exactly the same thing because it was a huge and he was out, he was completely gone,” said Hearn.

Eddie favors Galahad in the rematch

“Yeah, we have options on Kiko; he’s a Matchroom fighter,” said Hearn when asked if there’s a rematch clause to force a second fight with Galahad. “We’ll look at that with Kid Galahad.

“Kiko might want a quick fight in Spain, and Barry [Kid Galahad] might want some time to recover from that really brutal knockout. We’ll work with Barry, of course, to get him another shot at a world title.

“You never know what a knockout like that does to your career, but Kid Galahad has never been really hurt before.

“He’s never been in any brutal fights, so I expect him to come back fresh. I still favor him in a rematch because he was dominating, wasn’t he?

“Kiko’s legs buckled in the first round, and I thought, ‘Maybe this will be over now?’ It’s just unbelievable,” Hearn said.

It sounds like Hearn is kidding himself by thinking Galahad beats Martinez in the rematch. With Martinez’s power, he’s likely to knock Galahad out a second time, especially if the rematch happens right away.

Some would argue that Galahad would be better to put off the rematch for a year and take a couple of tune-up fights against weak punchers to get his bearings back.

Galahad needs to change his way of fighting and become more of a hit & run mover if he wants to beat Martinez. The way that Galahad fights now with his high-volume punching style will put him at risk of getting hurt again by Martinez.

With the type of power that Martinez possesses, it’s only a matter of time before he knocks Galahad’s block off.

“[Alycia] Baumgardner was sensational. I feel Steffy will beat himself up a little bit about taking Baumgardner as a comeback [from a year-long layoff],” said Hearn in reacting to IBO/WBC World female super featherweight champion Terri Harper getting stopped in the fourth round by Baumgardner in the co-feature.

“It was just an unbelievable performance and was full of confidence all week. I spoke to someone who works in her team tonight, and she said, ‘We’ve been really trying to get in her head. We know she [Harper] struggles with her confidence, and we wanted to put it on her.’ That might have had an effect on her.

“She didn’t look confident, Terry. She did look a little bit fragile. Was that the weight or was that the layoff? I don’t know. It was great refereeing. Terri was out on her feet and could have gotten hurt,” said Hearn.

Baumgardner was stronger, faster, and more athletic one of the two fighters. It was plain to see from the first round that Harper was overmatched by the American.

In the fourth round, Baumgardner nailed Harper with a big right hand that dazed her. Harper looked out on her feet from that shot, which resulted in referee Mark Lyson making the quick decision to stop the fight before Baumgardner had the chance to land the coup de grace finisher.

“A star is born tonight in Baumgardner, and again, a rematch is open to Terri and Stefffy,” said Hearn. It’s a real tough one to come back into. Does she move to lightweight? I don’t know.

“As with Barry, we’ll support her one million percent. She’s a diamond of a girl, and we love Steffy, and they’ll be back for sure. Again, it’s the confidence thing, it’s the belief,” said Hearn when asked if he believes Harper will take the rematch with Baumgardner.

“Sometimes a fighter can bounce back and believe in themselves enough to come back and avenge the defeat, but sometimes people need confidence-boosters to come back into a fight like that,” said Hearn.

It’s probably a bad idea for Harper to fight Baumgardner in an immediate rematch, as she wasn’t competitive enough in the fight for a second match to make sense. The battle was like watching a replay of George Foreman vs. Joe Frazier.

Baumgardner dominated Harper just like Foreman did with Frazier, and you could tell she’ll beat her again if Hearn decides to force a rematch.

It would be better to take Harper in another direction towards someone she can beat. Baumgardner is too good for Harper, and if they were to fight a thousand times, she’d lose every one of those matches in this writer’s view.

“Maybe Alycia has a defense first, and then we do it, or maybe Terri goes straight back into it? We’ll sit down with her and plan out the future,” said Hearn about Harper. 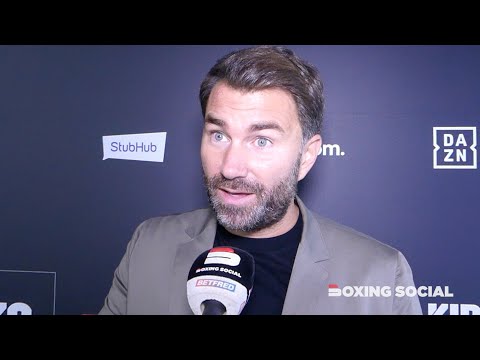 David Benavidez could face Beterbiev vs. Browne winner at 175 if no Canelo fight »