David Benavidez could face Beterbiev vs. Browne winner at 175 if no Canelo fight

By Sean Jones: David Benavidez says he’s thinking of beating Canelo Alvarez to the punch by moving up to 175 to take on the winner of the December 17th fight between IBF/WBC light heavyweight champion Artur Beterbiev and Marcus Browne. It’s believed that Benavidez will need to do something drastic for him to get a fight with Canelo, as the Mexican star will likely continue to ignore him unless he snatches the IBF & WBC belts from Beterbiev.

Canelo has talked about wanting to fight Beterbiev, but he’s been glacially slow in going about doing it. That’s a pattern with Canelo.

Unlike Canelo, when Benavidez talks about wanting to fight quality opposition, he means it.

If Benavidez defeats Beterbiev, he’ll put massive pressure on Canelo to fight him because he wants/needs the Russian fighter’s two titles as part of his next goal of becoming the undisputed champion at 175.

The former two-time WBC super middleweight champion Benavidez might need to do something special like dethroning the boogeyman at 175 in Beterbiev for him to get Canelo interested enough to want to fight him.

It’s believed that Canelo’s next target is to move up to 175 to try and become the undisputed champion in that weight class.

It’ll be a different story for Canelo to try and duplicate that feat at 175, especially if Benavidez beats him to the punch by defeating the winner of the Benavidez vs. Browne fight next December to grab the IBF & WBC belts.

The fight was too one-sided for it to be entertaining, as Kyrone couldn’t punch and was taking a beating from Benavidez until his corner threw in the towel to stop the one-sided fight in the seventh.

Is Artur Beterbiev next for David Benavidez?

“I’ve been thinking about that lately,” said Benavidez to Fighthub when asked about his thoughts of beating Canelo to the punch by moving up to 175 to fight the winner of the December 17th match between IBF/WBC light heavyweight champion Artur Beterbiev and Marcus Browne.

“He’s a warrior, bro,” said Benavidez when asked how Kyrone Davis was able to take the punishment he absorbed without folding earlier.

“I mean, I knew I was going to take him out eventually because that’s the way I work. When I put the pressure on them, and they don’t have anything to offer. I feel like I get better as the fight goes on,” said Benavidez.

“I throw more punches and land more, but hats off to Davis. But as long as you remain calm, and you don’t get frustrated and don’t get the knockouts fast, that’s the key to it,” Benavidez continued on his focus against Kyrone.

If Benavidez and his team have their heads on straight, they’ll realize that they WON’T get a fight against Canelo unless they defeat IBF/WBC light heavyweight champion Artur Beterbiev to snatch his two straps to use as bait.

It’s elementary to predict what move Canelo will take for his next fight, as he’s entirely focused on winning or defending titles.

When Canelo does make defenses, it’s against poor opposition that isn’t a threat to him, as we saw in his fight earlier this year against Avni Yildirim.

Canelo isn’t going to defend his four super middleweight titles against a dangerous fighter like Benavidez. That’s not happening, and I doubt that it ever will.

If Benavidez wants to fight Canelo, he’s got to fight Beterbiev and take his two straps. Taking those two belts from the Russian fighter will effectively box Canelo in, forcing him to fight soon.

Sean Jones still believes that Canelo will take the more accessible options first by going after WBA 175-lb champion Dimitry Bivol or WBO belt-holder Joe Smith Jr. Canelo will save Benavidez for last, knowing how hard that fight will be and likely hoping that someone at 175 will beat him.

“I should have thrown it more, but everything worked out perfectly,” said Benavidez. “We’ll see what happens,” said David when told that boxing fans believe Canelo Alvarez will get in close and land body shots against him.

“Everybody says the same things over and over. I get hit too much and this and that. I really don’t get hit, but you craft a game plan for each fighter. I know Kyrone Davis didn’t throw body shots like that.

“I mean, people that talk more s*** don’t know anything about boxing,” said Benavidez. “They watch boxing on TV and think they know everything, but I’m really in there working, I’m working with multiple sparring partners, and I’m doing a lot of stuff. I’m doing good. I don’t need their advice,” said Benavidez about the fans.

“I got a lot of power too, I throw punches in bunches, and I don’t get tired, so I think that’s the best thing about me. My stamina is crazy,” said Benavidez in reacting to being told that Canelo has been knocking out everybody at 168.

“Definitely,” Benavidez said when asked if a fight between him and Canelo is a ‘toe-to-toe fight.’ “And I’m bigger guy [than Canelo], and I’m faster too.

“It’ll be a great fight. The people are going to win. Whoever wins this fight, it’s going to be an amazing fight,” said Benavidez.

The best way to beat a fighter with poor stamina like Canelo is to push a furious pace and go toe-to-toe with him.

You’re not going to win a decision against Canelo because he’s incredibly popular, and he’s likely going to insist on picking a venue that favors him.

What we’ve seen in Canelo’s fights with Gennadiy Golovkin is that he tires quickly when he’s forced to fight hard, and he’s done by the sixth round.

The thing is, Golovkin didn’t push a murderous pace against Canelo the way he should have, and yet he still wore him out in both of their fights. Canelo’s stamina hasn’t gotten better since his fights with GGG, as some casual boxing fans believe.

Canelo hasn’t gassed since his last fight with Golovkin because his competition has been weak, with him fighting marginal paper champions at 168 in Saunders, Plant, Fielding & Smith.

Once Canelo gets in there with Benavidez and is forced to fight three minutes of every round, he’s likely to gas out by the third round.

“You can’t make mistakes just because you’re looking to get a knockout,” Benavidez said. “I didn’t make any mistakes. I kept on touching him; I kept my distance, everything was good, and I did what I was supposed to do.

“I didn’t want the fans to get to me,” said Benavidez in remarking about why he was patient and started off slowly against Kyrone. “It was crazy, but it’s good to think like that.

“I know a lot of people wanted me to go in there and throw everything in the first, but I wanted to stay disciplined because that’s really what matters. You have to learn, and I’m maturing too, and I think that in the longevity of my career, that’s better.

“You have to relax. The knockout is going to come, but you have to wait a little bit, but I feel like I did a tremendous job. That’s why,” said Benavidez when told that it doesn’t look like he needed his jab against Davis.

“Sometimes, I fight fighters, and I’m not landing at first, but until I start opening up with the jab, but this dude [Kyrone] was so available for shots. I felt like that’s why I didn’t really need the jab too much,” said Benavidez.

It was such a mismatch that Benavidez could afford to show patience against Kyrone because the guy didn’t belong in the same ring with him.

I mean, Benavidez’s last opponent Ronald Ellis would have destroyed Kyrone if it had been him in there with him. It was a terrible replacement opponent for Benavidez after Jose Uzcategui tested positive for a banned substance and was yanked from the card. 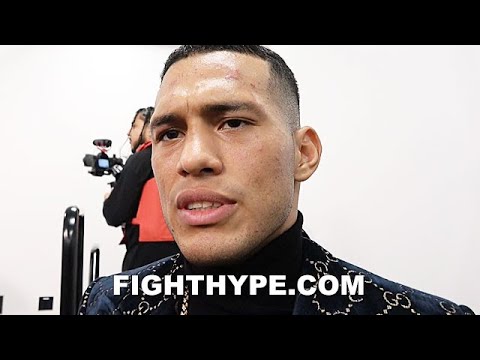