Tyson Fury: ‘I’m going to smash his [Deontay] face in’

Tyson says he would like to “smash’ Deontay’s face in, but he’ll be happy as well if wins a 12 round decision. The most important thing for Fury is to win and come home with his WBC heavyweight title still in his possession on Saturday night.

For Wilder, it’s crucial that he wins the fight because he can ill afford to lose a second time to Fury.

In his defeat last year, Wilder had many excuses for what went wrong. This time, those excuses won’t work with his fans, so he’s got to win.

“Do you know what? I’m going to cheat again because I’m going smash his face in… I loaded the gloves with horseshoes and dynamite. This time I’m going to put a bit more metal in there,” said Fury to MMAFighting.

Team Wilder needs to make sure they check Fury’s gloves carefully if they’re worried. That’s something they should have done last time as well, and it’s on them if they didn’t.

“This baby [WBC belt] is coming home with me, back to the Bay Area, and I don’t mean San Francisco,” said Fury to Sky Sports News.

“My legacy is already set. I’ve become two-time heavyweight champion of the world, I’ve won every belt there is to win and I’m undefeated after 13 years as a pro.

“It’s been a fairy tale ending for me. I don’t care if he talks or he doesn’t,” said Fury about Wilder. “Mind games don’t work with me.

“I just want to win the fight and go home in one piece,” Fury said when asked if he wants to knock out Deontay again. “Winning is winning. Failure is not an option,” Fury said.

It would be better for Fury to focus on his boxing for Saturday’s trilogy with Wilder rather than going to war like last time. Fury proved that he could easily outbox Wilder in their first fight in 2018, so there’s no point in taking any unnecessary risks.

Tyson not concerned about his weight

“I just got to go in there and do what I do best,” said Fury. “What’s meant to be in life will be and what’s not meant to be won’t be. This is what boxing is like. Everything happens in life for a reason.

“It doesn’t matter weight, size to beat anybody,” said Fury when asked if he’ll weigh in the 270s on Saturday for Wilder fight. “I’m not aiming for a particular weight. I’m just eating plenty of food, and I’ve trained hard. Whatever I weigh in on the night that’s what I weigh in at.

“It doesn’t matter what he does,  it matters about me and what I do. Winning is winning, an inch or a mile.

“I’ll take a knockout or a points victory. As long as you win, you move on to the next one,” said Fury on his title defenses against Deontay. 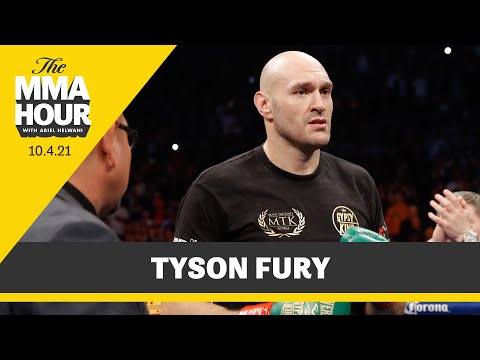 Deontay Wilder: No one wants to fight Luis Ortiz »