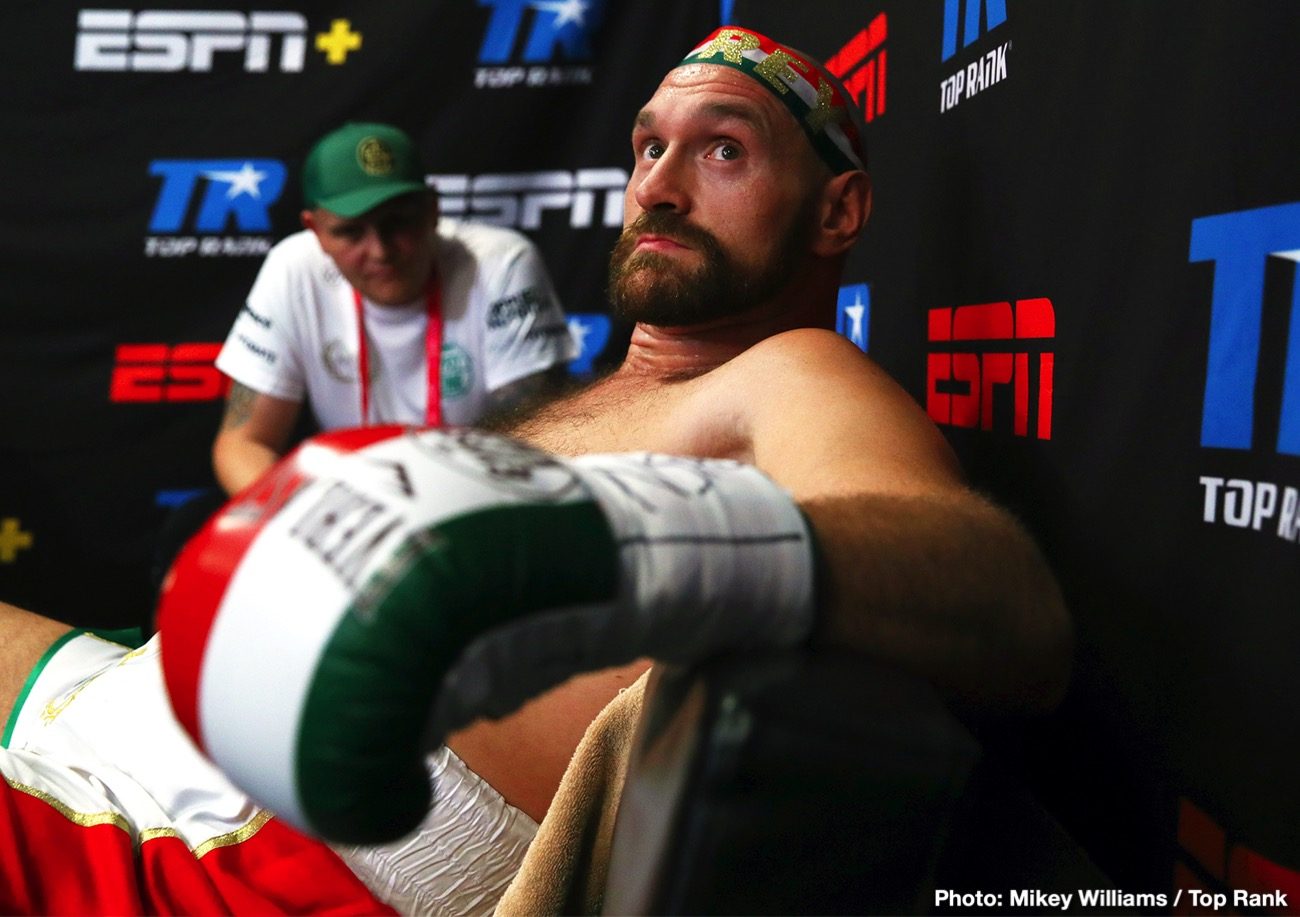 By Charles Brun: Tyson Fury’s half-brother Tommy is picking him to knock out Deontay Wilder in the same fashion as last time they met when they square off this Saturday, October 9th, in the headline attraction at the T-Mobile Arena in Las Vegas.

Tommy says he expects the powerful former WBC heavyweight champion Wilder (42-1-1, 41 KOs) to start fast, throw a million punches in the first five rounds before giving away to the bigger 6’9″ Fury (30-0-1, 21 KOs).

The winner of Saturday’s Fury-Wilder III clash will be sitting back waiting to face the rematch winner between IBF/WBA/WBO heavyweight champion Oleksandr Usyk and the recently beaten Anthony Joshua.

There’s a lot of green to be made for the Fury vs. Wilder 3 winner, as they’ll meet up with whoever emerges as the victor in the Usyk vs. Joshua 2 clash next year.

Will Tyson Fury keep it clean?

Tommy didn’t address whether Tyson will be cheating on the night, as many boxing fans believe something was erratic about his gloves last time he fought Deontay.

Also, some fans noted that Fury was throwing rabbit punches during the fight and getting away with it due to the lax officiating from the referee. Rabbit punches are highly dangerous and illegal in boxing.

One would hope that gloves will be checked out ahead of time that Fury is wearing so that the fans aren’t worried about the deck being titled in his favor.

Moreover, the referee will need to keep an eye on Fury if he starts with the rabbit shots.

“He’s sitting back on that throne where he belongs,” said Tommy Fury to BT Sport Boxing in talking about Tyson.

“I think what’s going to happen in Tyson – Wilder 3 is you’re going to see Deontay come out and will be throwing a million punches per round for the first four or five rounds.

“I think after that, it’ll be just like it was in the second fight. I feel like whenever Wilder has spent what he’s throwing, and he hasn’t any more left, you’re going to see Tyson come on very strong, and you’re definitely going to see a stoppage again,” said Tommy Fury in predicting another knockout for ‘The Gypsy King.’

Fury’s trainer SugarHill Steward says that he’ll be 20 pounds heavier than the 273 lbs that he weighed for the last Deontay fight, meaning he’ll come into the contest in the 290s.

If SugarHill is serious about Fury weighing in the 290+ lb region, he’s going to get poleaxed by Deontay early in the fight.

Bigger isn’t better in boxing, and SugarHill is making a mistake in believing that Fury’s success last time was because of his size rather than a well-placed rabbit punch in the third round.

Present 🤝 Future@TeamBigBabyy is soaking it all in from the Gypsy King 👑 pic.twitter.com/PgZ5WhuSJ7

“Tyson is a big strong fellow, and Deontay Wilder is what he is,” said Tommy Fury. “He’s not the biggest heavyweight, but you don’t need to be for him to be dangerous.

“But I think you’re going to see Wilder come out fast in the first few rounds, and then Tyson is going to apply the pressure on and stop him again.

“Once you’ve got somebody’s number and you’ve beaten them twice as he has done, it’s very hard to get rid of that number,” said Tommy Fury.

Deontay Wilder: ‘I’m knocking Fury out cold, and he won’t get up’ »