‘Boots’ Ennis says he’d like a title shot against IBF/WBC 147-lb champion Spence Jr. (27-0, 21 KOs) most of all. However, Spence is coming off an eye injury, and it’s unknown if he’ll be willing to take a dangerous fight in his first match back from surgery in 2022. 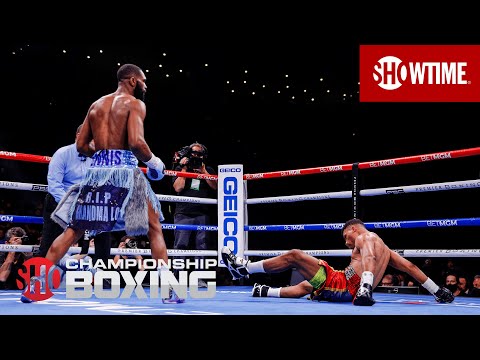 Ennis, 24, said at the post-fight press conference that if he can’t get a title shot, he’ll fight in a title eliminator to become mandatory for one of the champions.

Jaron’s first round knockout of the experienced 31-year-old contender Dulorme was the 12th of his career in stopping an opponent in the opening round.

What made the knockout even more impressive was the fact that Ennis stopped Dulorme much faster than Crawford, who beat him by a sixth round stoppage in 2015.

That was not an easy fight for Crawford, as he was getting nailed by Dulorme and struggled through the first five rounds.

Crawford isn’t a knockout artist like Ennis, so it’s not surprising that it took him until the sixth to get the stoppage. Ennis is more of a pure puncher with heavier hands than Crawford, and that’s not going to change.

Crawford is about to turn 35, and he’s not going to suddenly improve his power to put it on the same level as Ennis.

“It was a good knockout,” said Ennis. “You know me, I wanted to show my skills and abilities. I’m just thankful for this opportunity. Now it’s on to the next. Let’s get the big names.”

“Spence, Crawford, Ugas, Keith Thurman,” said Jaron Ennis when asked by Showtime who he wants to fight next following his first round knockout win over Thomas Dulorme.

“I’m ranked #3  with the IBF, so Errol Spence,” Ennis said when asked by Jim Gray of Showtime who he wants above all for his next fight.

It’s pointless for  Ennis to be mentioning Keith Thurman because there’s no chance he’ll fight him when or if he ever returns to the ring. Thurman hasn’t fought in 2 1/2 years, and it’ll be three pretty soon.

What Ennis needs is to fight in a title eliminator to lock himself in as the mandatory challenger for Crawford or Spence.

Ennis knocked Dulorme down with a booming right hand in the first round. Moments later, Ennis dropped him for a second time with a hard right hook to get the knockout victory. The contest was stopped at 1:49 of the first round.