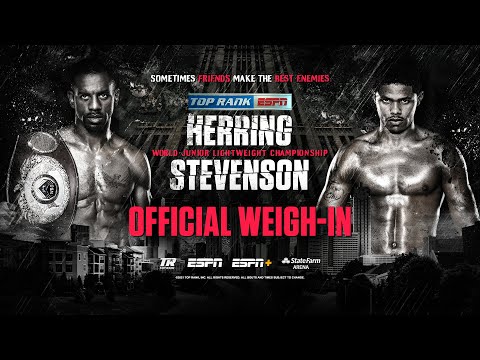 Herring (23-2, 11 KOs) has made three defenses of the title he won from Masayuki Ito in May 2019. Stevenson (16-0, 8 KOs), a 2016 Olympic silver medalist, is considered by many to be the heir to the pound-for-pound throne. He picked up the interim world title in June with a dominant decision over Jeremiah Nakathila.

When Herring and Stevenson had their final faceoff, the fighters and their teams exchanged verbal barbs, with Stevenson grabbing Herring’s belt on multiple occasions. They were separated and will resume the jawing at Friday’s weigh-in.

Tickets are still available and can be purchased at Ticketmaster.com.

At Thursday’s final press conference, this is what the combatants had to say.

“The odds just play to my story. I’ve always been an underdog, not just in boxing but in life, so I don’t get into the oddsmaker thing. It doesn’t bother me at all.”

“It’s not personal, it’s just business. We’re building a fight is all it means to me. I’ve heard worse and been through worse. We’re just two top competitors in the division trying to prove who is the best.”

“It just feels like another elite level fight in a loaded and talented division, so we just take it one fight at a time. We put all personal feelings to the side and just go to work and do what we have to do.”

“Atlanta is cool. I have family out here. My sons live out here as well. It’s another home and it’s an honor just to be fighting in the State Farm Arena because there’s not a lot of fights coming into town, so whenever you can bring a special fight to a certain city, it’s always a great thing.”

“It means everything to me. This is my first time being able to go against a champion and being able to take a champion’s belt will mean a lot to me…. and I can’t wait to hear them say, “AND THE NEW!'”

“It’s definitely not personal, just business at the end of the day. He’s not my friend. I don’t hit him up and say, ‘let’s fight.'” We don’t have any conversations. I don’t talk to Jamel Herring outside of boxing.”

“It’s going to feel real good beating the whole team. I can’t wait to go against {Herring trainers Brian McIntyre and Red Spikes}. It’s not just Jamel that I’m fighting. I’ve got to beat Bomac and Red, and it’ll feel good doing that.”

“You’re going to see a special night, my coming out party. It’s going to be a great night, and he said he’s going to spoil the party, so let’s see if he can do it.” 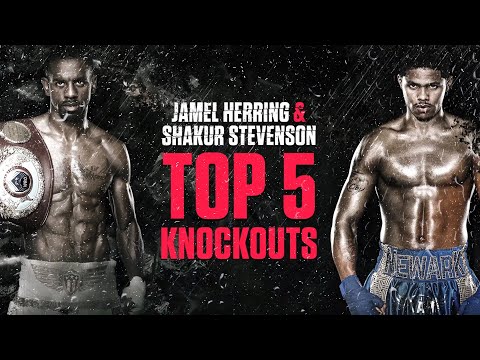 “I’m grateful to be here. It’s just an amazing experience to be 19 years old making my ESPN debut. I’m ready to go, and on Saturday night, I’m going to show it. I like to have fun and keep it simple and smile for the camera.”

“I have a lot to learn from my last fight, but my team has made the proper adjustments and on Saturday night I’ll show that I can adjust to a lot of stuff. The main event is a great dance. You have two great boxers going toe to toe and I just wish that the best man wins.”

“All of the greats say that the first fight is always the hardest. The first is out of the way, so it’s all fun from here on out. I love boxing, it’s my passion, and I’m looking forward to continuing my grandfather’s legacy and creating my own. After the first fight, you get used to it. I have the greatest people in my corner. I have SugarHill Steward and BB Hudson, so I’m very happy with the corner that I have, and if I could build anything off of my pro debut, it would be more off a jab and a cleaner right hand.”

“It means absolutely everything to fight in my hometown. This is my second time fighting in Atlanta. It’s boxing, hit and don’t get hit, and I’m going to do whatever it takes to win whether I fight or box. My dad always tells me to train at my hardest. I’ve been real focused this training camp, and I’m just ready to go to work. It’s definitely like a kid in a candy store just being around all of this talent. It’s an honor. We got Xander Zayas, Shakur Stevenson, Jamel Herring, and Nico Ali. It’s nothing but greatness.” 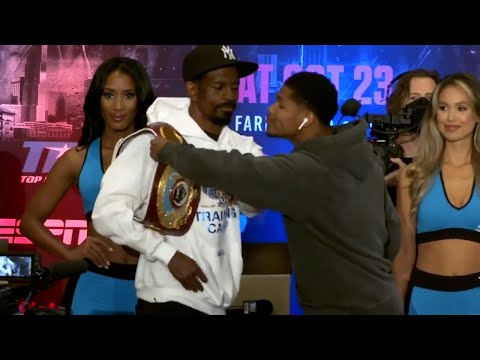 Jamel “Semper Fi” Herring and Shakur Stevenson have exchanged verbal volleys in person and on social media. They’ll settle the score in the Throwdown in A-Town.

Herring will defend his WBO junior lightweight world title against former featherweight world champion Stevenson on Saturday, Oct. 23, at the award-winning State Farm Arena in Atlanta in an event promoted by Top Rank.

Nico Ali Walsh (1-0, 1 KO), grandson of “The Greatest,” Muhammad Ali, looks to make it 2 for 2 against an opponent to be named in a four-round middleweight special attraction.

“We are thrilled to be back in Atlanta with a spectacular card headlined by a junior lightweight championship grudge match between a veteran champion and one of the sport’s supreme young talents,” said Top Rank chairman Bob Arum. “And with names like Ali Walsh, Ragan, and Isley on the undercard, Atlanta’s great fight fans will see many of the sport’s most promising up-and-comers.”

Herring (23-2, 11 KOs), a U.S. Marine Corps veteran who captained the 2012 U.S. Olympic boxing team, has made three defenses of the world title he won via decision over Masayuki Ito in May 2019. After a challenging 2020 campaign that included a bout with COVID-19 and a disqualification victory over Jonathan Oquendo, Herring punched his passport in April and knocked out former two-weight world champion Carl Frampton in Dubai. He now steps up against pound-for-pound talent and 2016 U.S. Olympic silver medalist Stevenson (16-0, 8 KOs), a former WBO featherweight world champion who vacated the title last year to move up to junior lightweight. Stevenson is 3-0 at junior lightweight, most recently picking up the interim WBO junior lightweight world title in June with a shutout decision over Namibia’s Jeremiah Nakathila. Stevenson has lost only a handful of rounds since turning pro in April 2017, a dominant run that’s included victories over the likes of Christopher “Pitufo” Diaz and Joet Gonzalez.

“2021 has been good to me so far. I started the year with a big fight and a major win over Frampton,” Herring said. “I look forward to finishing out the year the same way I started it, not only with another huge victory but as a world champion. I have nothing else to say. I’m focused on October 23 and the fourth title defense of my WBO belt.”

Stevenson said, “Jamel had to fight me, or he would’ve been stripped of his world title. I boxed him into a corner, and I will take his world title devastatingly on October 23. I can’t wait to fight in front of the amazing fans in Atlanta. Trust me, you are going to see a show, and I will become a two-weight world champion.”

Ali Walsh’s Aug. 14 professional debut drew international media attention, and he knocked out Jordan Weeks in the opening round while wearing a pair of his grandfather’s old trunks. He’ll make his ring return in a city that hosted two of Muhammad Ali’s most memorable moments. State Farm Arena sits less than two miles from the Atlanta Olympic Cauldron Tower, where Ali lit the Olympic flame at the 1996 Summer Olympics. In October 1970, Ali fought Jerry Quarry at City Auditorium. His first fight in more than three years after being banned from the ring for refusing induction into the U.S. Army during the Vietnam War. Ali Walsh’s second pro fight will come three days shy of the 51st anniversary of the Quarry fight, which Ali won by third-round knockout.

Ali Walsh said, “Atlanta welcomed my grandfather with open arms, and I am honored to fight there on a major world championship card. When Top Rank said I’d be fighting in Atlanta, I thought of my grandfather lighting the Olympic torch and his bout against Jerry Quarry. This will be a special evening for my entire family. The legend lives on.”


« Rolly Romero on Tank Davis: ‘He’s punch drunk, I’m knocking him out in one round’