By William Lloyd: Promoter Frank Warren thinks it’s a good idea for Anthony Joshua NOT to take an immediate rematch with Oleksandr Usyk for his next fight.

Warren would like to see Joshua take another fight or two before facing Usyk (19-0, 13 KOs) to try and win back his IBF, WBA, and WBO heavyweight titles.

If Joshua did step aside to face another opponent, WBC heavyweight champion Tyson Fury could face Usyk for the undisputed championship. Joshua could then face the winner of the fight, which many boxing fans believe would be Fury. Warren likes that idea.

Joshua stepping aside makes the most sense business-wise because it would potentially set up a massive money fight between him and Fury in the second half of 2022.

With Fury’s size, he matches up better with Usyk than Joshua, and he wouldn’t be as confused by his style as AJ was.

Joshua (24-2, 22 KOs) has already activated his rematch clause in his contract after losing to Usyk by a 12 round unanimous decision on September 25th.

“That’s for the other side to sort out,” said Frank Warren to iFL TV about the subject of Anthony Joshua stepping aside so that Fury can face Oleksandr Usyk for the undisputed championship.

“If he [Joshua] did step aside, theoretically if that happened, then the winner, which I believe would be Tyson and then fights Joshua. What the WBC has said is if we can get a unification, then do it.

“The only thing that’s stopping from that happening is they [Joshua and Usyk] have a rematch clause, and the only one who can stop the rematch is Anthony Joshua. If he takes it, he takes it.

“If I were Anthony Joshua, to be quite honest, irrespective of what we would like, I would sort of think about taking that fight [with Usyk]. I would get a couple of more or at least get another fight under the belt because that is a tough fight for him, a tough, tough fight.

“He’ll be spurred on, Usyk, by the last one, and I think he’ll be thinking to himself, ‘If I really stepped it up, I could have stopped him.’ He nearly stopped him [Joshua] in the last round, and they were about to throw the towel in.

“That could happen [Joshua stepping aside], but you know what? That’s their business for him to get on with, and we’re focused on where we are.

It’s a terrible idea for Joshua to fight Usyk next because the loss will still be fresh in his mind, and the rematch will almost surely play out like their previous one.

Joshua believes that he can beat Usyk by imposing his size and power on him, but that could refuse in AJ gassing out quickly. If Usyk starts throwing sustained combinations as he did in the 12th round, Joshua could fold.

Whyte has a tough fight with Wallin

“We’ll do whatever Tyson wants to do, he’s the boss, and he’s the guy that will decide what he wants to do,” said Warren. “He’s got a number of options, and we’ll see where he goes from there.

“Wallin did really well, but he [Fury] was hampered by a bad cut,” said Warren about Fury’s contest against Otto Wallin in 2019. “But he did well Wallin, but eventually Tyson did what he had to do and won the fight.

“Dillian Whyte is going to have his hands full with him [Wallin] because he knows what’s on the line. Let’s see what happens when he comes through, and then let’s see what the WBC says.

“Once they make their decision, then Tyson will decide what he wants to do. I think it’s a tough fight for Dillian Whyte.

“If he’s a free agent, we’ll speak directly with Dillian. It’s a big fight, and it will be a big fight in the UK because the pay-per-view numbers will be huge,” said Warren on a fight between Fury and Whyte.

Matchroom Boxing promoter Eddie Hearn seems to be confident that Whyte will defeat Wallin because he’s been doing a lot of talking about him getting a title shot against WBC champion Fury.

Right now, it’s best for Hearn to hold off on looking ahead for a fight between Whyte and Fury because Wallin could wreck things for Dillian.

We already saw Whyte lose to Alexander Povetkin a year ago by a fifth round knockout.

That fight showed that Whyte’s ability to take a shot isn’t good enough to see anyone as a safe fight for him, especially a big guy like Wallin.

It’s still unclear whether Fury and his promoters at Top Rank will choose to take the fight with Whyte if he gets past Wallin. Fury has several things he can do to swerve the Whyte fight: 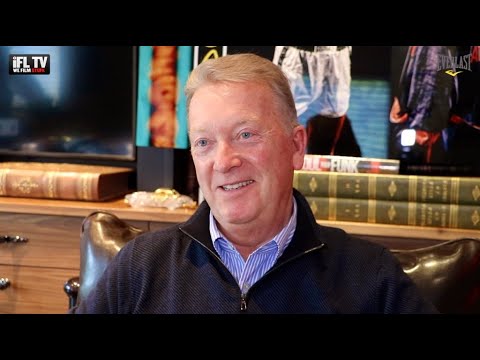