By Allan Fox: Knockout artist Efe Ajagba could steal the show in his 10-round heavyweight fight against talented Cuban Frank Sanchez in their 10-round fight this Saturday, October 9th on the Tyson Fury vs. Deontay Wilder card at the T-Mobile Arena in Las Vegas.

The 2016 Nigerian Olympian Ajagba (15-0, 12 KOs) has punching power comparable to Wilder, and some believe he hits harder than him with either hand. You can argue that Ajagba would be every bit of a tough fight for Tyson Fury as Deontay.

Ajagba might even be more dangerous because he can take a punch, and he would be looking to layout Fury with every shot.

On Saturday night, the spotlight will be on the 6’6″ Ajagba when he battles the highly technical former Cuban amateur star Sanchez (18-0, 13 KOs).

This fight is going to tell the fans a lot about the potential for Ajagba, as he blasts out the unbeaten Sanchez, he’s going to show that could soon be a threat to the heavyweight champions.

Ajagba is ranked #8 WBC, #10  WBO and he needs a victory over Sanchez to get pushed up the rankings for both of those organizations.

Sanchez, 29, is going to make it tough because he’s an excellent mover and boxer/puncher with a lot of ability. Ranked #5 WBO, #11 WBC, Sanchez is being moved fast by his management to get him in position for a world title shot.

Ajagba not looking for a KO

“He made the mistake of calling me out. Just like my last fight ended in a knockout. Everybody saw the knockout. It just come by chance,” said Efe Ajagba to iFL TV on him being added to the Fury vs. Wilder III card for Saturday.

“As for Sanchez, I know he moves a lot, but I don’t care if he moves. We’ll see about that. I’m not planning any knockouts.

“So, he’s going to call ‘Flash.’ It’s going to come quick. I’m not going to plan a knockout, so I have to do my boxing, move around and do everything I do in the gym,”  said Efe Ajagba.

It’s good that Ajagba isn’t putting pressure on himself to score a knockout on Saturday, but it’s important that he try. Getting an emphatic stoppage win would help his popularity in the sport, and get him pushed up the rankings.

“Sparring is different from a real fight with different gloves,” said Ajagba when asked about what it was like to spar with Tyson Fury.

“It’s not about the spar. It’s just a training session to get prepared for a fight. I sparred with Tyson Fury and it gave me a lot of experience and a lot of strategies.

“How to feint a lot. Tyson Fury feints a lot. It gave me a lot of confidence in how to fight people like Frank Sanchez because Sanchez is a small guy.

“I’m not saying a small guy because I’m not here to underestimate somebody. Every fighter is a fighter, and every fighter that fights is a world title for me,” Ajagba said.

Ajagba and Jared Anderson are two of the sparring partners that were rumored to have worked Fury over during his preparation for his postponed July 24th fight against Wilder.

Both of them were said to have hurt Fury, dropped him, and beaten him from pillar to post during the sparring sessions.

We’ll probably never find out what went down during those sparring sessions, but it’s easy to picture Ajagba hurting Fury and dropping him with his power. Even with large sparring gloves on, Ajagba would be dangerous for Fury. 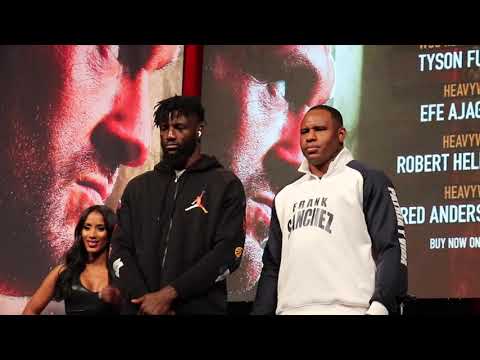 Ajagba sitting on fence for Fury vs. Wilder

“In that fight, both guys are warriors,” said Ajagba about the main event between Fury and Deontay Wilder.

“He’s a knockout artist as well. So let the best man win. This is heavyweight boxing,  anything can happen. Just one punch. I can’t predict the fight.

“Just like Joshua –  Usyk.  I didn’t know who was going to win the fight, but that’s why I say, let the best man win.

“I was very surprised [that Joshua lost] because Usyk is a very, very good boxer from cruiserweight all the way to heavyweights.

“Usyk put on a show with a great performance. I just want them [the boxing fans] to watch my fights. Stay tuned.

“You guys are the ones that make me fight on the card of Tyson Fury. I appreciate you guys. I need you guys to watch the fight live on October 9th, so don’t miss it,” said Ajagba.


« How did you score Fury-Wilder I? Scorecard and analysis

Pennsylvania Boxing Hall of Fame Induct 23 on Sunday in Philly! »