By Charles Brun: Dillian Whyte’s next fight will likely be against Tyson Fury, says Matchroom Boxing promoter Eddie Hearn. Whyte has a shoulder injury and isn’t fit to fight against Otto Wallin as previously scheduled on October 30th, says Hearn.

Eddie maintains that it’s up to their discretion whether they want to reschedule Dillian’s canceled title defense of his interim WBC heavyweight strap against Wallin or not.

What happens if Fury refuses to fight Dillian?

Hearn isn’t saying their plan if Fury chooses not to fight Whyte, which is a genuine possibility. Fury wants the winner of the Anthony Joshua vs. Oleksander Usyk II rematch, not a match that is being forced on him.

Fury could ask to be installed as the Franchise champion with the WBC, which would leave Dillian helpless.

Hearn says that if Whyte were looking to pull out of his fight with Wallin to swerve him, they would have done it three weeks ago when they first heard the news from the World Boxing Council about Dillian being the Fury’s mandated next opponent if he’s unable to set up a unification clash with IBF/WBA/WBO champion Usyk within 30 days.

Fans don’t like the timing of Whyte’s shoulder injury, as they see it as too convenient for Dillian because it makes him look like he’s ducking the risky match with Wallin so that he can get his payday against Fury.

If Whyte chooses to sit out until next year to challenge Fury, he will be going into the match rusty. I mean, Whyte fought four rounds last May in stopping 42-year-old Alexander Povetkin in the fourth round in Gibraltar.

Before that, Whyte was knocked out in five rounds by Povetkin in August 2020. So in the last two years, Whyte has fought nine rounds against 40+-year-old Povetkin. That’s not the ideal preparation you’d like to see from Whyte going into a clash with Fury.

Maybe Whyte and Matchroom don’t care. If this is just about money, Whyte will get his payday and walk off into the sunset after Fury destroys him like he’s a knock-off version of Dereck Chisora.

“There’s no value, Dillian Whyte has been paying. He has four or five sparring partners out in Portugal. He’s got a full-time camp running with all his team.

“We got this news about Tyson Fury three weeks ago, and we all talked about the news,” said Hearn about the WBC saying that the mandatory [Whyte] will be next for Fury if a unification deal with IBF/WBA/WBO champion Oleksandr Usyk can’t be reached within 30 days.

“Obviously, people are saying, ‘Why would you fight Otto Wallin when you can fight Tyson Fury?’ Dillian Whyte made the decision to move forward with the fight [against Wallin].

“He wants to get some activity. So that’s not the case at all,” said Hearn in denying that Whyte faked his shoulder injury to bail from the Wallin fight,” said Hearn.

Charles Brun doesn’t know why Hearn isn’t producing the MRI scans for Whyte’s injured shoulder so that he can show the fans. As the late U.S president Ronald Reagan once said, ‘Trust but verify.’

Hearn could quickly defuse all the criticism that Whyte is getting if he pulled out the MRI scans or for the doctor to meet with the media and make a statement on Whyte’s shoulder injury. Doing either of those things would be so easy for Hearn.

Dillian is not fit to fight

“This pull-out hurts everybody. It hurts Dillian Whyte. He spent time, money, and effort on this camp. It hurts us. It was never a part of the plant. Dillian Whyte picked up a shoulder injury.

“I got the first call probably the Mikey Garcia week to say, ‘He’s [Whyte] just going to have a couple of days off sparring, he’s got a shoulder problem. We don’t think it’ll be an issue. No problem.’

“He [Dillian] went back and sparred once at the weekend, and he sparred on Monday. He had to stop after seven or eight rounds on Monday in pain, in a lot of pain.

“You know Dillian. He’s happy to go through that pain. He got a consultation, and he had his imaging done, and he couldn’t fight, and that’s the truth. That’s the reality of the situation.

“I know [Wallin’s promoter] Dmitry [Salita], and all these people are pissed off with you. You’ve got Dmitry Salita writing to the WBC, saying, ‘Otto Wallin must get his shot at Fury.’ Mate, you were just a voluntary defense.

“You were 20th in the ranking. This was just a standard defense for Dillian  Whyte, and he was happy to take that defense.

“So there’s no mucking around with the injury at all. He’s [Whyte] not fit to fight, and that’s the truth,” Hearn said.

Hearn says that Whyte isn’t fit to fight, but the boxing public will likely continue to see Dillian as having faked his shoulder injury.

That’s bad for Whyte, Hearn, Matchroom, and Fury if he chooses to give him a title shot. The controversy will follow Whyte like a skunk and stink up his fight with Fury next year.

Does Fury want to be a part of that? I wouldn’t be surprised if he tells Whyte to get lost. If Fury is stripped of his title or vacates, Whyte would be made email champion by the World Boxing Council, which would be a big disappointment.

He’d miss out on that big payday against Fury, and he would be seen as a paper champion due to the way he was emailed his belt.

“Yes, if this was his last fight, what would he have done? To be honest with you, he’d have probably still pulled out because he’s in pain. It’s not like it might break down after 11 rounds. He’s in pain without training.

“It’s a no-brainer, and the doctors looked at it and said, ‘No.’ Obviously, he’s [Whyte]  going to fight Tyson Fury. So that’s something that has to be considered, but it’s not even what’s coming after.

“He cannot physically fight next week, and he’s done everything to try and be in that ring [to fight Wallin], but they had to make a decision.

“He didn’t even make a decision. His doctors did. That’s our option,”  said Hearn when told that Wallin’s promoter Dmitry Salita wants the Whyte fight to be scheduled.

“I’m not ruling out that fight [between Whyte and Wallin]. But the WBC has also made their statements that the interim world champion [Whyte] fights Tyson Fury.

“So there’s a lot going on behind the scenes with the lawyers and everything. But I would think Dillian Whyte’s next fight will be Tyson Fury. We’ll have to see. I’m not ruling out the Wallin fight. That’s a fight that’s our discretion to reschedule,” Hearn added.

In theory, Whyte will get a title shot against Fury, but it remains to be seen in reality. We can assume that Fury will choose to defend against Whyte, but he might not.

If Fury chooses not to, you can’t blame him. Whyte would be backing into a fight with Fury after seemingly ducking the Wallin clash.

Hearn should try and convince Whyte to reschedule the fight with Wallin because if he can beat him, there would be more interest in a Fury-Whyte battle.

But if Whyte chooses to swerve the Wallin fight to take advantage of the WBC mandating the fight, it will be perceived in a negative light by the boxing public.

Hearn offered Wallin a fight with Babic on Oct.30th

“I went back to Dmitry Salita, ‘Michael Hunter will fight Otto Wallin in London next week.’ I said, ‘Well, I think we should fight. No, problem, he can fight Alen Babic.’

“Alen Babic has come out and said, ‘I will fight Otto Wallin next week, no problem.’ But Dmitry Salita looked at that fight and said, ‘Why would we fight a guy that is 8-0 with 8 KOs?.’ ‘I thought you wanted to fight?’ So they [Team Wallin] chose not to accept that fight. It’s hugely unlikely that he’ll be on that card, and we’ll see.

“It’s not our responsibility, but we want to be fair at the same time. But unfortunately, when they come out with all these accusations, it doesn’t want to make you help out with the process because they’re unfounded.

“But I understand his [Wallin] frustration. He could have boxed Alen Babic next week, but he chose not to.

“We’re not just going to put Otto Wallin in a fight with a random person in London that has no relevance to the card and what we’re doing. So we’ll have to see what happens,” said Hearn.

Of course, Wallin and his promoter Salita did not favor fighting heavyweight prospect Alen Babic on October 30th.

There’s nothing to gain for Wallin fighting the 30-year-old undersized heavyweight Babic because he’s not a top contender, and there would be no possibility of getting a title shot against Fury.

That would be a HUGE step back for Wallin to face a mere domestic-level prospect like Babic. That small guy should be fighting at cruiserweight, not heavyweight.

“It’s not great for us,” said Hearn about Whyte pulling out. “Financially, it’s a disaster. We’ll proceed with the show. Dillian, I expect him to be out for weeks of rest rather than months for rest should be back in the ring in early next year, and hopefully, it’ll be against Tyson Fury. No,” said Hearn when asked if Whyte’s injury affects his WBC mandatory spot.

“They’ve got this 30 days, which I think is after the fight,  which has been ten or something. He’s [Whyte] got 20 days before that’s called. Dillian will rest. I’m sure that it will provide further updates from his doctor, but it won’t affect the date for his mandatory fight,” said Hearn.

It hurts Whyte, Wallin, and Matchroom to have Dillian backing out of the match without rescheduling, and that’s why Whyte should do the right thing and reschedule with Wallin as soon as his shoulder problem heals. 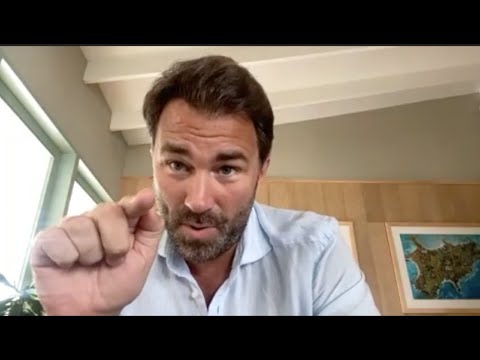