By Dan Ambrose: Andre Ward liked what he saw from Deontay Wilder initially with his strategy to box Tyson Fury last Saturday night in their trilogy match at the T-Mobile Arena in Las Vegas.

Ward says Wilder threw his game strategy out the window after he was hurt by Fury, which altered his plans for the fight.

Although WBC heavyweight champion Fury (31-0-1, 22 KOs) isn’t known for being a big puncher, he hurt Wilder when landing clean shots, particularly when he was in close throwing clubbing shots.

Fury eventually wore Wilder down with pressure, wrestling, and inside fighting to score a stoppage in the 11th round. Wilder was severely hurt on the canvas.

This was a far worse beating than Fury inflicted upon Wilder than the last time they fought twenty months ago in February 2020.

“It’s up there, bro,” said Andre Ward to Fighthype when asked if Fury vs. Wilder 3 was one of the best fights he’s ever seen. “Sometimes, you don’t realize what you saw until you go back and watch it again. Just watching it the first time, I know that’s a modern-day classic.

“You saw from the first round, he came out and established his jab. He was patient, and he had a beautiful jab to the body, beautiful body shots,”  said Ward when asked what adjustments Wilder made for this fight.

“He wasn’t head-hunting, and he was trying to stay composed. So you saw that they [Team Wilder] were trying to implement something. His game plan worked for the first couple of rounds, and then he got hurt and went down. So that’s going to throw a monkey wrench in your plans.

“Then you got to try and regroup again.  You kept seeing Wilder get hurt, look fatigued and then regroup, and then he hurt Fury [in round 4]. It looked like Fury was out, and then Fury recovered.

“They just kept going back and forth and back and forth. You just got to respect it. That’s more than just heart. That’s a  deep resolve,” Ward said.

Wilder had no plan to deal with Fury’s holding

Deontay’s defense wasn’t good enough for him to fight the way he did, and he wasn’t doing much on the inside when Fury was electing to clinch and lean on him.

Wilder’s trainer Malik Scott had to have coached him on tactics to employ when Fury would hold, lean his weight on him, and wrestle, but he did almost nothing to combat that.

If Scott did teach Wilder what to do when being held, he didn’t remember what he was taught to use during the fight.

Boxing greats like Lennox Lewis had a tremendous uppercut and a clubbing right hand that he would use when his opponents would try and maul him.

We didn’t see that from Wilder. Even former WBA heavyweight champion David Haye was excellent at dealing with fighters that attempted to clinch him.

Haye would club them repeatedly with hard shots thrown in rapid succession to make them not want to hold. Look at Haye’s right with John ‘The Quiet Man’ Ruiz as an example of how he dealt with fighters that would try and hold. Haye would have been a better coach for Wilder than Malik Scott because if he had just taught him one thing in how to defeat Fury’s mauling tactics, it might have made the difference.

You hate to say it, but Wilder has the wrong trainer. Deontay needs someone like Haye because everyone he fights from now on will follow the Fury blueprint in how to beat him by clinching, leaning their weight on him, and throwing short punches in close.

“You saw two guys tonight that came into the ring with a made-up mind because if they both weren’t fully convinced that they could beat the other guy, someone would have packed it in a lot sooner than they did,” said Ward about Wilder and Fury being focused.

“Deontay Wilder got what he said he wanted in the second fight. He said, ‘Give me the opportunity to go out on my shield, and that’s what he got tonight,” said Ward. 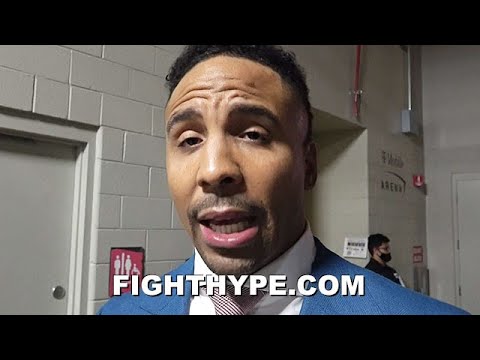 
« Deontay Wilder: ‘Fury came to lean on me, rough me up’