‘Warrington vs Lara 3 has to happen’ – says Eddie Hearn

By Scott Gilfoid: Eddie Hearn was in the damage control mode last Saturday night following Josh Warrington ruining his rematch with former conqueror Mauricio Lara (23-2-1, 16 KOs) by head-butting him repeatedly until his left eye was ripped to open in the second round, causing the fight to be stopped at the Headingley Stadium in Leeds, England.

When the two fighters were at close range, Warrington lowered his head and rammed Lara in the face like a small Rhinoceros.

Oddly, Hearn says he saw improvement in Warrington from the first fight with Lara, and he believes he was on his way to winning the fight. It didn’t look that way to Gilfoid.

If anything, Warrington looked worse last Saturday than in the first fight because he mainly rammed Lara with his head rather than throwing punches.

Warrington looked deathly afraid of Lara from the get-go and saw that behavior play out with him coming in head-first to clinch at every opportunity.

It appeared that Warrington knew he was going to get the living daylights beaten out of him again, so he resorted to fouling to get the fight stopped.

Josh was getting hammered by Lara

What we saw was Warrington repeatedly banging heads with the 23-year-old knockout artist Lara in the two rounds of the fight, and we hadn’t seen that occur in the first fight last February.

For the boxing fans that may not remember, the hard-punching Lara wiped the deck with Warrington, knocking him down twice en route to an easy ninth round knockout.

Warrington looked helpless to keep Lara off him, and things were looking bad for the Leeds native until he banged heads with him in the second round, causing the terrible cut over his left eye.

Boxing fans saw it as an intentional move on Warrington’s part, as it was obvious that he would get knocked out again by Lara. The Mexican warrior looked like a young George Foreman in his rematch with Joe Frazier.

Foreman had already easily knocked Frazier out in two rounds of their first fight in 1973. In 1976, Foreman continued where he left off in meeting Frazier in a rematch and easily knocked him out in five rounds.

Like Foreman, Mauricio Lara was beating Warrington in the second round when suddenly, the Leeds native crashed into the Mexican talent with his head, causing the cut

You can argue that Warrington temporarily saved his career with that beautiful head-butt, sad as it was, but it’s not something that will keep him going for long.

Basically, Josh delayed the inevitable. Warrington will be finished soon as a top-level fighter, but it’ll be delayed until December or in the first quarter of 2022.

Hearn says that Warrington vs. Lara 2 will happen, but not until 2022 due to the cut that the Mexican warrior suffered last Saturday. In the interim, Hearn wants the former IBF featherweight champion, Warrington, to return to the ring in December or January to challenge

“The first two rounds were great, and I just wanted more,” said Eddie Hearn to Matchroom Boxing on the Lara vs. Warrington 2 fight last Saturday.

“As soon as the head clash happened, [referee] Steve Gray looked at it, when they come out to get back fighting, I didn’t think it [Lara] looked that bad. Obviously, they started engaging, and the rest of the round was fantastic.

“I got in the ring and went over to him [Mauricio Lara], and it was literally his entire eyelid was open, and it was impossible for him to continue. The pressure was on the doctor, to be fair, and he had to do what he had to do to protect the fighter’s safety.

“I thought Josh was looking great, and Lara looking dangerous and fresh. I think it would have unfolded into an incredible fight. It was a great two rounds, but we wanted so many more. I wished for a few more rounds.

“I think that Lara fight will 100% happen,” said Hearn in making it clear that he’s committed to matching Warrington up with Mauricio again.

Yeah, the Lara vs. Warrington 3 fight will happen one of these days, but by the time it does, there will no longer be any reason for the match to occur.

Hearn has designs on putting Warrington in with one of the world champions at 126 in December, and he stands no chance of beating WBA champ Leo Santa Cruz, WBC champ Gary Russell Jr. or WBO belt-holder Emanuel Navarrete.

Assuming Warrington gets thrashed in December by whoever he fights, the third fight with Lara in 2022 will no longer interest boxing fans. Warrington will be viewed as washed up after he loses in December, so no one will see him fight Lara again.

If Warrington ruins his December fight by head-butting in a match with Santa Cruz or one of the other champions, boxing fans aren’t going to be eager to watch him, knowing that the chances are high for another fight-stopping cut.

“I think with Josh, I thought he looked great tonight,” said Hearn. “I thought he boxed great for two rounds. He said he felt comfortable with Lara’s power.

“I thought it would have been a really tough fight regardless. And I still believe he would have won the fight,” Hearn said about Warrington.

I had Warrington narrowly winning the first round, but Lara was putting it on him in the second round with the pressure.

Lara landed many massive shots in round two, and Warrington was clearly starting to crumble when his career-saving head-butt occurred.

“I want to see him [Josh] out again, to be honest with you. If we can get him out in December or January, Lara isn’t going to be ready to fight until spring.

“Maybe, Josh has a run-out in December or January and then goes into the Lara fight.

“The Lara fight is one that must happen, and  Josh must wipe that slate clean. I want to keep him [Warrington] active.

“If any of the champions are there and there’s a shot that comes up. Leo Santa Cruz in the states, he’ll bring a huge amount of people out there or maybe look to do it out here.

“I’m proud of Josh Warrington because he had the balls to get back on the horse and say, ‘I want Mauricio Lara.’ He didn’t have to do that. Even after that tonight, he still wants to do it again.

“He won’t move on, but Lara will need his time to heal. It’s a horrendous cut.

“I believe we’ll see the third fight, and I believe it’ll be a thriller but plenty of options in the interim for Josh Warrington,” said Hearn.

If Hearn does set up a third Warrington-Lara fight, he’s going to need to think about talking to Warrington and his team to make sure he doesn’t wreck that fight too with his head-butting.

Hearn needs to make sure that Warrington really wants the third fight with Lara because if he’s afraid and not mentally in it, we could get a repeat with the head-butting. 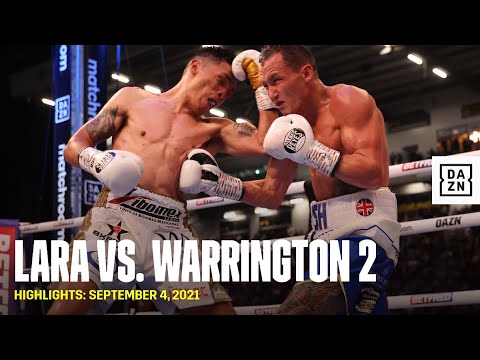