By Allan Fox: Evander Holyfield has concerns about whether Deontay Wilder will remember all the things his new coach Malik Scott has taught him during training camp for his trilogy match against Tyson Fury on October 9th.

The boxing great Holyfield fears that Wilder (42-1-1, 41 KOs) won’t be able to utilize the things Scott has taught him because they won’t be natural to him. In other words, Deontay will be thinking too much rather than reacting inside the ring.

Evander says that because Wilder started boxing at a late age, it could be difficult for him to change his fighting style to add new things to his game.

For that reason, Holyfield says Wilder should slowly add new changes to his game rather than going overboard with a completely different style.

The easiest one of those four things for Wilder to implement is throwing more jabs, but it’s questionable whether that will improve his game enough for him to beat Fury.

“In all these things you work on in being the very best. Is he getting it to the point where he can remember to do them as a natural thing?” said Evander Holyfield to Fighthype in talking about all the changes Deontay Wilder’s trainer Malik Scott has done with him during his training camp for the Tyson Fury trilogy fight.

“The worst thing you can do for a fighter is let somebody knew come in there giving him something new to do.

“They take it all of a sudden you start thinking too much,” said Holyfield on all the changes that Wilder has made overnight with his game.

“Boxing is a reaction sport. If you and me were boxing, you might not be comfortable, but I’m comfortable about how far I can get to for me to make you do something that I can counter a shot,” Holyfield said.

It’s doubtful that Wilder will be able to use even one-tenth of what Scott has attempted to teach him during this camp.

Even if Wilder does use them, it won’t come natural and Fury will be able to easily nullify what he’s doing.

“A lot of them don’t know how to make a lot of adjustments, so I don’t know if this is him [Wilder] or not. He’s one of my favorite fighters.

“Stick to what you’re really good at and implement it slowly, and maybe he can and maybe not.

“There aren’t too many things you want to change from. You add some but you add things that you needed,” said Holyfield on Wilder’s fight.

Unfortunately, he doesn’t have a lot of time to implement changes slowly to his game. If Wilder loses to Fury, his boxing career as a big-money earner will likely be over. 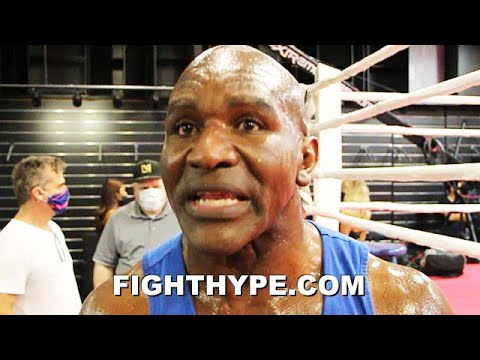 Shakur Stevenson toughening up for Jamel Herring fight on Oct.23 »