By William Lloyd: Eddie Hearn says he doesn’t think IBF/WBA/WBO heavyweight champion Anthony Joshua has trimmed down much weight for his fight against WBO mandatory Oleksandr Usyk on September 25th.

The recent photos of Joshua (24-1, 22 KOs) show a fighter that looks like he’s right 230 lbs, which is the weight that he weighed when he turned professional in 2013 against Emanuele Leo.

This could be a mistake on Joshua’s part to trim off 10 lbs of muscle because he could lose his main advantage over Usyk.

Joshua’s size and power are the main things he has going for him. If you take those things away, he’ll be easy pickings for the southpaw Usyk (18-0, 13 KOs).

Joshua weighed 240 lbs for his last fight against Kubrat Pulev last December, and he was at 237 for his rematch with Andy Ruiz Jr. in December 2019.

You can understand why the Matchroom Boxing promoter Hearn doesn’t want to discuss Joshua’s weight openly because Team Usyk will use that information to play accordingly. However, there’s no point in Hearn not talking about it because Usyk and his team have already spotted the weight drop by Joshua.

Due to this, they understand that Joshua will be using the highly mobile Wladimir Klitschko style of fighting that he’s shown in the past for his fight with Joseph Parker and his rematch with Ruiz Jr.

“He doesn’t look small to me. He looks massive,” said Hearn to Pep Talk UK in commenting on Joshua’s weight loss. “He looks like an absolute unit, to be honest with you.

“His legs look huge, and powerful, and fast. With them, it’s never a case of, ‘I’m going to drop weight. What am I weighing today?’

“The difference in the training over the years [for Joshua] is that he’s gone from a guy that was lifting weights and doing a lot of power explosive stuff to a guy that is boxing.

“Before, he was extremely explosive, but after the tank was empty, how do you go through those championship rounds?

“He was just big, strong, and tough with attributes and good fundamentals. Now he’s well-rounded and knows and understands the game. That makes you so much more difficult to beat,” Hearn said.

AJ looks emaciated compared to how he previously looked in his recent fight against Pulev.  Hopefully, Joshua isn’t too weak from the weight he’s taken off because he won’t last long against Usyk if he’s weight drained.

Joshua should be pound-for-pound if he wins

“I’m really proud of AJ. He’s built himself into a great fighter,” said Hearn. “He’s also learned and taken bits of knowledge over the years and really created a special place in Sheffield.

“It’s similar to the Klitschko camp. You’ve got seven or eight sparring partners, but they’re training.

“They’re not just sitting on their a**** waiting for a call. They’re training with him.

“He’s [Joshua] taking this very seriously, and he’s getting better every day. This is the kind of fight where he wins this fight, I want people to say, ‘You’re a pound-for-pound great.’

“Because when you look at the type of opposition he’s faced, he doesn’t get the credit he deserves.

“If he beats Usyk, who is on the pound-for-pound list, albeit as a cruiserweight, you’ve got to give AJ credit and say, ‘You are a pound-for-pound great fighter. Looking great, feeling great. Three weeks on Saturday? Then off we go, mate. 65,000 in three weeks,” said Hearn.

It’s reasonable to assume that Joshua will be moved up high on the pound-for-pound list if he looks great in beating Usyk. 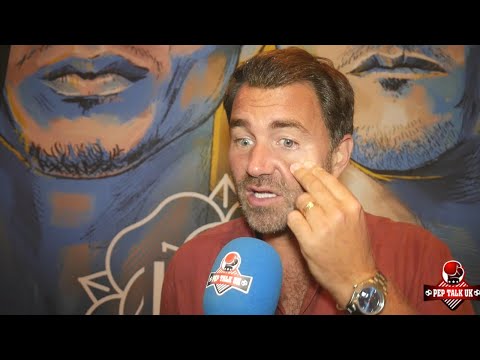