By Matt Lieberman: Vergil Ortiz Jr. says he’s ready to challenge Terence Crawford for his WBO welterweight title after stopping Egidijus “Mean Machine” Kavaliauskas (22-2-1, 18 KOs) in the eighth round last Saturday night at the Ford Center at The Star in Frisco, Texas.

Last March, Crawford had told Vergil, 23, that to get a title shot against him, he had to earn it by facing his former foe Kavaliauskas and defeating him.

However, Crawford has to take care of his WBO-ordered mandatory defense against Shawn Porter next, which will be in October or November, as long as neither fighter is injured in training camp.

In the meantime, Vergil Jr will need to stay busy, fighting whoever his promoters at Golden Boy Promotions find for him. Vergil Jr. says he can’t fight for a world title against Manny Pacquiao and Yordenis Ugas because they’re fighting, and IBF/WBC champion Errol Spence Jr is injured with an eye problem.

Vergil Ortiz’s next fight likely not for a world title

“Yes, sir,” Vergil Ortiz Jr said when asked by DAZN if he’s ready to fight Terence Crawford. “I don’t even know what I have to do any more [to earn a fight with Crawford].

“Yes,” Vergil Jr said when asked if he feels he’s earned the opportunity to challenge Crawford for his WBO welterweight title. “I’m ready to fight him whenever,” said Ortiz Jr.

“I can’t fight the champions right now because Crawford is lining up with Shawn Porter, Ugas and Pacquiao are fighting each other, and Errol can’t fight,” said Vergil Ortiz Jr. to Little Giant Boxing on the champions at 147 being unavailable to fight him right now.

“They have legitimate excuses not to fight me. So as far as my next fight, it’s most likely not to be for a world title shot because the champions are preoccupied.

“So, we’re going to try and stay busy, get another fight in this year, and try to keep moving forward,” Ortiz Jr said.

Well, Golden Boy Promotions will need to find a suitable opponent for Vergil Jr to fight to keep him sharp while he waits for the smoke to clear with the 147-lb champions in their fights this year.

Good options for Vergil’s next fight in 2021:

Many of those fighters wouldn’t be interested in facing a dangerous puncher like Vergil Ortiz, but perhaps one or two might be willing. With the confidence Conor Benn is showing in himself, he might be open to a fight with Ortiz Jr.

“Patience is a virtue,” Vergil Jr. said when asked what’s ‘the biggest lesson’ he can learn from his fight with Kavaliauskas.

“My coach told me right now that the plan was to box him, keep him on the outside, and not get hit with too many rights,” Ortiz Jr. continued.

“And my coach told me that I went in there trying to fight him already, and I stuck to the game plan. I could hear my corner very clearly. 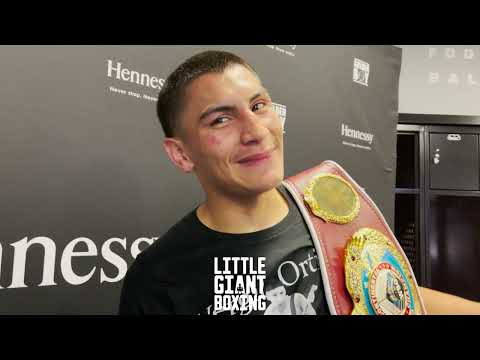 Rigondeaux: ‘I like to frustrate all these little boxers’ »