By Mark Eisner: Jake Paul (4-0, 3 KOs) outworked former UFC champion Tyron Woodley (0-1) in winning an eight round split decision in a catchweight fight at cruiserweight on Sunday night in their headliner on Showtime at the Rocket Mortgage FieldHouse, in Cleveland, Ohio.

Jake Paul was hurt in the fifth round by a big shot from Woodley. From that point on, Jake was gassed out and unable to do much other than jab.

Woodley failed to step on the gas the way he needed to for him to get the victory over the A-side Jake.

Despite having a big advantage in fight experience, Woodley fought like he was afraid to throw punches, and he gave the fight away to the 24-year-old  YouTuber Paul.

Boxing News 24 scored it an eight round draw. Neither guy did enough to get the win. 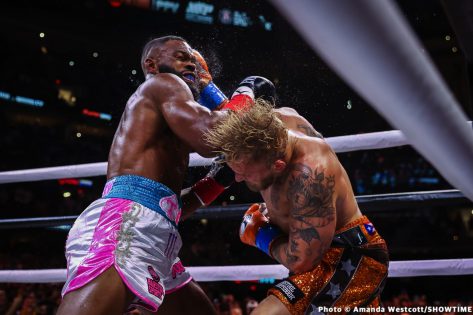 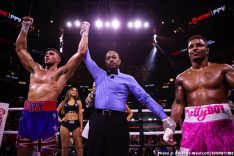 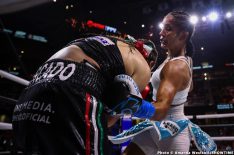 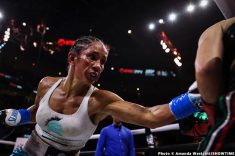 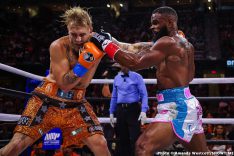 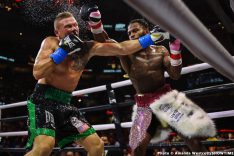 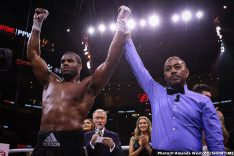 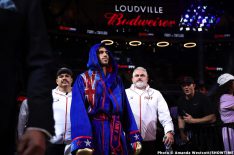 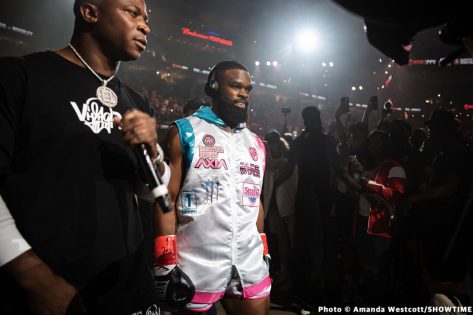 YouTuber/Social media influencer Jake Paul, the brother of Logan Paul, wants to defeat the 40-year-old fading former UFC champion Woodley (0-0) to show the fans that he’s a real fighter, not just a guy that fights hand-picked non-boxers to sell to the public.

Unfortunately for Jake, he’s in a no-win situation when trying to prove himself to boxing fans because they recognize that he’s not fighting a boxer tonight.

Woodley is an older MMA fighter that hasn’t won a fight since 2018 and was likely picked out because he’s viewed as beatable.

Jake Paul vs. Tyron Woodley: who will be victorious?

In the case of Woodley, we can only judge him for what he’s done in the UFC octagon because he’s not had any fights yet as a pro inside a boxing ring.

As far as Woodley’s recent activity in the UFC competition, it’s not a good sign that he stopped winning in 2018, and he’s lost his last four fights. That suggests that age is creeping in, causing Woodley to come up short in his fights.

There’s a lot of bad blood between Woodley and Jake after what was said about Tyron’s mom.  All the trash talk between the two fighters has both guys boiling over, and they want to settle it.

This will be Jake’s fourth fight as a pro tonight, and he’s hoping to add his fourth knockout victory.

How to watch Jake Paul vs. Tyron Woodley?

Watching the Jake vs. Woodley fight is as simple as ordering it on Showtime PPV. The cost is $59.99, which is a steal in terms of PPV and could prove to be a great value.

As I stated earlier, the card kicks off at 8 pm ET on August 29th at the Rocket Mortgage FieldHouse, Cleveland, Ohio.

We’ll see what Woodley has in the tank tonight in his pro debut inside the squared circle. We know Woodley was a great fighter in his day in UFC competition, but his victories have dried up. Right now, we don’t know what to expect from Woodley tonight.

Woodley lost against great fighters in an entirely different sport, so defeats should not bear what he does tonight.

“My opponent is small; he just seemed little,” said Jake Paul to Betonline AG about Woodley.

Jake Paul and former UFC champ Tyron Woodley square off tonight in an eight-round professionally sanctioned fight in a catchweight bout at cruiserweight in Ohio.

Boxing News 24 will be giving updates below of the action and results from the five fights on the main portion of the card.

The action kicks off at 8:00 p.m. ET, and it should be interesting with a lot of the compelling contests on the Showtime PPV card


« Boxing Judge Carol B. Polis Being Inducted into Two Hall of Fames!