How Rocky “The Brockton Blockbuster” Marciano & Floyd “Money” Mayweather, Jr. Got to 49-0!

By Ken Hissner: This writer has a shirt that on the front is printed MARCIANO 49-0 and on the back MAYWEATHER 49-0. I had to made up special before the “exhibition Mayweather had with Connor McGregor, which would have changed it to 50-0* since McGregor never had a boxing match of record. Even after this, Mayweather went to Japan in an exhibition with Tenshin Nasukawa on November 5, 2018.

As an amateur, Marciano didn’t take up boxing until 1943 while serving in the Army and was 10-4 with 8 stoppages hailing from Brockton, Massachusetts. Mayweather was 84-9, losing in the 1996 Olympics in Atlanta in the semi-final hailing from Grand Rapids, Michigan. Before getting into the records as professionals, both have been inducted into the International Boxing Hall of Fame. Earnings were $50,000 for Marciano and $1,859,000 for Mayweather.

Marciano turned professional in March of 1947, winning 42 straight before earning a world title fight. Mayweather won 16 before earning a title fight. Marciano’s all in the heavyweight division. Mayweather turned professional in October of 1996 and won the WBC Super Featherweight title in 1998 at 21. He won the WBC Lightweight title in 2002, a disputed decision over Jose Luis Castillo. In his first defense, 8 months later, he defeated Castillo without a doubt.

In those prior fights to winning the title, one fight stood out in Marciano’s career in his 27th fight, and that was a split decision win over Roland LaStarza, 37-0, over 10 rounds at Madison Square Garden in New York City. In October of 1951 was another when Marciano faced “his hero,” the former world champion Joe “The Brown Bomber” Louis, 66-2, dropping him with for an 8-count and followed up driving Louis partially through the ropes ending it without a count in the 8th round. Marciano, it was told, cried after the match in the dressing room of Louis, knowing he beat the man he admired so much. It would be the final fight for Louis. 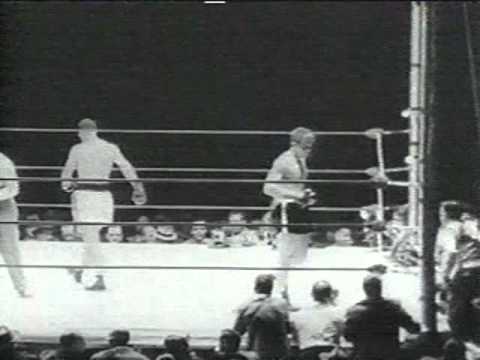 In September 1952, Marciano won the world title while trailing in rounds 4-7, 4-8, and 5-7 after 12 rounds. In the thirteenth round, Marciano hit Walcott with a right that completely twisted the face of Walcott that is a classic picture until this day at 0:43, knocking him to the canvas and out. Just 20 days after his birthday, the 30-year-old Marciano was champion! One of Marciano’s stablemates Norristown, PA, lightweight Hank Cisco, told this writer he went to Walcott’s dressing room. The ring physician said, “this man should never fight again. Seems a bone was broken under an eye. If he gets hit, he will be knocked out.”

Since the mob controlled Walcott, he was pushed into a rematch with obviously putting their money on Marciano. Some 8 months later, in May of 1953, in the rematch, as predicted by the ring physician, Walcott was knocked out in 2:25 of the first round by Marciano in the first round. This was the first time this writer viewed a boxing match at the age of 9, with my father being an avid sports fan.

Marciano would follow up in his next defense in September in a rematch with LaStarza, 53-3, after 10 rounds held a slight lead 7-3, 5-5, and 6-4. In the 11th round, Marciano knocked LaStarza through the ropes for the stoppage, which was the 1953 Ring Magazine’s “Fight of the Year.”

Next up at Yankee Stadium, in the Bronx, New York, was the former NYSAC and NBA world champion Ezzard “The Cincinnati Cobra” Charles, 85-10-1, in June of 1954, with Marciano taking the decision by scores of 8-5, 9-5 and 8-6. The fight warranted a rematch 3 months later in September. Ahead 5-1 and 6-1 twice, having Charles on the canvas in the second round, Marciano suffered a severe cut splitting his nose in the 8th round. He had to end it or suffer a technical loss; he knocked Charles down and out.

It would be 8 months in May of 1955 to recover from the cut when Marciano took on British and Commonwealth champion Don Cockell, 66-11-1, at Kezar Stadium, in San Francisco, CA. At 0:54 of the 9th round, Marciano ended the match by technical stoppage. This set up his final bout against world Light Heavyweight champ KO king Archie “Old Mongoose” Moore, 149-19-8, in September of 1955. Moore knocked Marciano down for a “2” count but was knocked down officially 4 times himself, twice in the 6th, once in the 8th, and the final one in the 9th for the knockout at 1:19. After 8 rounds, Marciano was well ahead 5-2, 7-1, and 5-3.

In April of 1956, Marciano retired, saying, “I am retiring because of my wife and baby. He added, “no man can say what he will do in the future, but barring poverty, the ring has seen the last of me. I am comfortably fixed, and I am not afraid of the future.” Marciano had fought with a ruptured disc in his back since August of 1949 and suffered from an arthritic right elbow since 1951. His record was 49-0 with 43 stoppages.

In June of 1959, then world champion Floyd Patterson suffered a loss to Sweden’s Ingemar Johansson; it was rumored Marciano went to Italy and tried to get back in fighting shape to bring the title back to America. It didn’t work out. Patterson, a year after the loss, came back to re-win the title knocking out Johansson.

On August 31st, 1959, one day short of his 46th birthday, Marciano would die in an airplane crash going from Chicago to Des Moines, Iowa, in a field in Newton, Iowa.

As mentioned before, Mayweather won his first title in October of 1998, stopping WBC World Super Featherweight champion Genaro “Chicanito” Hernandez, 38-1-1, in the 8th round, at the Las Vegas Hilton, in Las Vegas, Nevada, where Mayweather had located. He was well ahead after 7 rounds, 79-73 twice and 80-72. 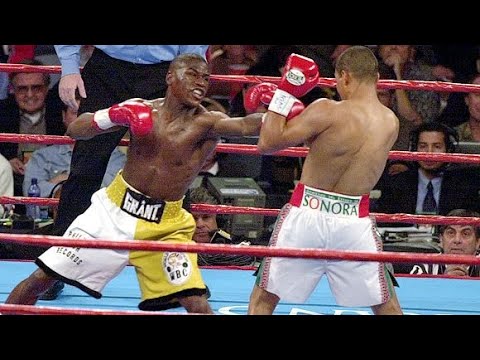 He would make 8 title defenses and 1 non-title win before winning the WBC World Lightweight title from Jose Luis Castillo, 45-4-1, in April of 2002 by scores of 116-111 and 115-111 twice. This writer remembers it being a controversial decision in spite of the scores. It warranted a rematch 8 months later, with Mayweather taking a decision by scores of 115-113 twice and 116-113.

From that point on, the jab disappeared with Mayweather taking the title.

Afterward being interviewed by Larry Merchant was asked why he stopped using the jab. He said, “it sure was working good, wasn’t it, Larry?” At ringside, commentator Manny Steward said, “I know Oscar well, and that wasn’t a good answer.”

Mayweather would cancel a rematch and retire, though coming back some 7 months later, while De La Hoya would have two more bouts, a win, and then a career-ending loss to Manny Pacquiao.

Mayweather would drop back to welterweight, making 3 defenses moving back to super welterweight in his third defense, easily defeating Saul “Canelo” Alvarez, by majority decision, 117-111, 116-112, and a strange 114-114, in September of 2013 in Las Vegas. This writer had it 120-108. Even in the final round, Alvarez wasn’t opening up for a knockout.

In May of 2015, Mayweather defeated WBO champion Manny Pacquiao, 57-5-2, by scores of 116-112 twice and 118-110. A month prior to the fight, it would later be said Pacquiao had a shoulder injury and would not be able to continue using pain injections, or it would be detected during a pre-physical. In September, Mayweather would defeat former WBC and IBF Welter champion Andre Berto, 30-3, 120-108, 117-111, and 118-110. Berto had been 3-3 in his previous 6 fights. It seemed Mayweather was looking for an easy 49th fight matching Marciano’s record. In July, he was stripped of his title and retired.

In August 2017, Mayweather came out of retirement after 23 months to defeat MMA champion, Connor McGregor, 0-0, having a lead after 9 rounds by 89-81 89-82 and 87-83, at the T-Mobile Arena, in Las Vegas. It seemed it was all set up ahead of time. Mayweather would carry his opponent, landing about 3 punches a round before opening up in the 10th round stopping McGregor at 1:05 of the round.

For some unknown reason, the Nevada commission allowed it to be an official match though this writer and many others considered it an “exhibition!” Why Mayweather considered ending his career with such a weak opponent to pass Marciano’s 49-0 record improving to 50-0*. As previously mentioned, this was followed by an exhibition match in Japan in December of 2018.

Though it’s normally 5 years after a boxer’s retirement, Mayweather was inducted into the IBHOF some 3 years after retiring. The date was not mentioned on www.boxrec.com.

This writer once wrote, “Mayweather will be back due to financial reasons like the previous champion Aaron Pryor would possibly suffering his first loss. Though making millions, it is rumored he is having difficulty with back taxes, and at age 43, he isn’t too old to return to the ring. De La Hoya is still talking about a rematch at age 53 is scheduled to “fight” former UFC fighter, 7-2, Vitor “Phenom” Belfort, 1-0, of Brazil, in his only fight in April of 2006, on September 11th.

Considering how competitive the welterweight division is, if that is where he would return WBO World champion Terence “Bud” Crawford, 37-0, it would be some challenge if Mayweather decided to jump into a world title fight. Crawford is rumored to be fighting former world champ Shawn “Showtime” Porter, who hasn’t fought for a year. The WBA champion is Pacquiao, 62-7-2 is meeting WBC and IBF World champion Errol “The Truth” Spence, Jr, 27-0, on August 21st in Las Vegas. Hopefully, a unification match will be made with the Crawford-Porter winner. Obviously, this is all speculation for Mayweather’s future and doubtful for a world title. Let’s hope there will be no comeback.