Spence wants Crawford after Pacquiao, could be Ugas

By Sean Jones: IBF/WBC welterweight champion Errol ‘The Truth’ Spence Jr said last Saturday night that he’s going to try and set up a fight with Terence Crawford next after he faces Manny Pacquiao on August 21st.  Spence (27-0, 21 KOs) added that if he can’t get the Crawford fight, he’ll move up to 154.

The reality is, Spence is likely to be matched up against the winner of Yordenis Ugas’ next fight to battle for his WBA 147-lb title. Spence’s management at PBC will almost surely go for the easier fight against Ugas or whoever has the WBA belt.

Ugas is fighting next month on the undercard of Spence vs. Ugas card on August 21st against a still to be determined opponent. Some boxing fans believe Ugas will be fighting Keith ‘One Time’ Thurman on that card, setting the table for a massive fight between Spence and the winner of that fight.

WBO welterweight champion Crawford (37-0, 28 KOs) is a fight that isn’t quite ready yet for Spence. Errol needs the WBA belt first so that when he meets Crawford, it’ll be for the undisputed 147-lb championship with all four titles on the line.

“I definitely want that fight, and we’ve just got to make it happen,” said Spence to Showtime about him wanting to fight Crawford. “It’s for his guys [Top Rank] and my guys [PBC] to talk to each other and see if it can happen. If it can’t happen, I’ve got to move up.”

No way is Spence moving up to 154 before fighting for the WBA belt, be it against Yordenis Ugas, Keith Thurman, or Shawn Porter. Whoever has the WBA belt will be hitting the lottery in a fight against Spence, which is why Thurman badly wants to fight Ugas.

‘One Time’ knows if he gets his hands on the WBA strap, it’s his golden ticket to get him the fight against Spence to make millions.

Right now, Spence vs. Crawford is not that much of a bigger fight in terms of money than if Errol were to fight Thurman.

Given Thurman’s popularity, charisma, and ability to promote fights with his trash-talking, a match between him and Spence would likely be BIGGER than if Errol were to fight Crawford.

That’s not a knock on Crawford’s talent that Spence-Thurman would be a bigger fight. It’s more about Crawford not having the same charisma that Thurman has, and he’s not nearly as comfortable talking to the media as he is.

Suppose you saw how Thurman took over the show a week ago at the Pacquiao vs. Spence press conference. Thurman overshadowed both Spence and Pacquiao with his interviews with the media.

Crawford couldn’t do what Thurman did. He’s not the kind of a guy that can captivate the media the way Thurman did, and the same goes for Spence and Pacquiao. They don’t have the charisma of Thurman.

Having three 147-lb titles in his possession rather than just two will help Spence negotiate a better deal against Crawford and his promoters at Top Rank.

While Terence and his promoters might say it’s not a big deal that Spence is a two-belt champion, they won’t be able to say the same thing if Spence comes to the negotiation table holding THREE titles.

Holding most of the titles would strengthen Spence’s hand to get the best possible deal with Crawford.

The downside of Spence having another title is that Top Rank boss Bob Arum might be unwilling to make a true effort at negotiating the Spence-Crawford fight if Crawford isn’t going to get a huge purse split.

Is Thurman a bad style match-up for Errol?

A rejuvenated Thurman (29-1, 22 KOs) could be a problem for Spence or Ugas (26-4, 12 KOs). If you saw the trimmed down Thurman from last week, he looked in excellent shape, not drained like he’d been for his fights with Pacquiao and Josesito Lopez. 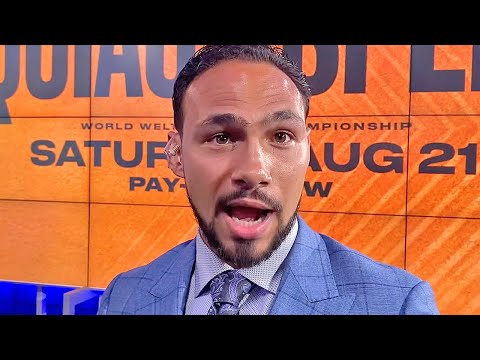 You can tell from looking at Thurman; he took the weight off slowly rather than dropping 30+ lbs in eight weeks like he did when he fought Manny in 2019.

If Thurman can get past Ugas, Spence will have no other option but to fight him next for the WBA belt. Yeah, we’ve heard repeatedly how Errol doesn’t want to fight Thurman because of how he froze him out for so many years.

But once Thurman has the WBA belt in his possession, Spence will have no choice but to battle him if he wants to get his hands on that strap.

You can’t rule out a win for Thurman against Ugas or Spence if he comes into the fight 100%, not weight drained like he was for his last two fights.

First off, Thurman needs to fight Ugas for the WBA belt. His promoters at PBC need to get him in the ring with Ugas on August 21 if he wants to be in a position to challenge Spence Jr if he successfully defeats Pacquiao.

It’s the perfect setup for Thurman to be fighting on the undercard of Spence vs. Pacquiao. If Thurman beats Ugas, he can immediately use the platform to say he wants the winner of the Pacquiao vs. Spence fight.