By Dan Ambrose: Keith Thurman sees a loss of speed from Manny Pacquiao from the two years he’s been out of the ring since his last fight, and he thinks Errol Spence Jr will have too much for him when they fight on August 21st. Keith has sounded bitter ever since the Pacquiao vs. Spence fight was announced.

The former WBA/WBC welterweight champion Thurman wanted the rematch with Pacquiao, but he was passed over by the Filipino star in favor of Spence.

If Thurman had kept active with his career and not gotten so fat, he might be getting a fight with Pacquiao or Spence, but they’re not going to take him seriously with him looking semi-retired.

Thurman, 32, has got his eyes on this fight because he wants to battle the winner. Spence hasn’t said anything in the last couple of weeks about whether he’s changed his stance about never giving Thurman a shot.

Maybe Thurman can change his mind if he picks up a solid win over WBA 147-lb champion Yordenis Ugas.

It doesn’t bode well for the former eight-division world champion Pacquiao if he’s slower for this fight because he could get hurt by the young lion Errol.

The 31-year-old Spence is eleven years younger than Pacquiao, and he’s coming off one of his best-career wins against Danny Garcia last December.

While Spence has been hard at work, Pacquiao has been busy with his senatorial job in the Philippines and not competing since his victory over Thurman in 2019.

Keith feels that Spence hasn’t been tested in the chin department yet, and Pacquiao will be able to show whether he can take a heavy shot without getting hurt.

“I know they loved that action I gave Pacquiao. Don’t worry, I’ll be right back,” said Keith Thurman to Little Giant Boxing. “I’m looking forward to that Pac fight too. I got to see how Errol is looking.

“I think he’s got what it takes [to beat Pacquiao]. I saw a little mitt-work from Pacquiao. He looked a little slower this camp; I’m not going to lie.

“We all know he’s a little older; he’s looking a little slower. I hope he gives Errol something good.

“One of those little sneaky-sneaky, bop-bop. You know, we want to see that chin get touched.

“I’m a better boxer than EJ [Errol Spence]. I’ve been grinding for a long time. This is not new.

“We’ve all got our skills and out traits, man. I do think I’m very well-rounded in the welterweight division. I stick, I move, I’ve got my head movement, and I throw combinations from awkward positions.

“EJ, he works behind that nice long jab, and he places his body punches very well. We’ve all got our strengths in this game,” said Thurman.

It’s going to be interesting to see if Pacquiao has enough left in the tank to hang with Spence. I mean, this would have been a tough fight for Pacquiao even in the prime of his career, but it’s going to be really tough for him now.

Keith is still upset about losing to Manny

“Fight Mayweather? Mayweather don’t fight nobody,” said Thurman. “You want me to fight him at Disney World with both hands behind my back? Then he might sign the contract.

“I’ll say, ‘Floyd, I’ll fight you with both hands behind my back. What’s good? That’s the only way he’ll get in the ring with me.

“Of course, I want that run-back with Pacquiao,” said Thurman. “I wanted that run-back this summer, but he chose Errol Spence, and his coach said himself that they think Spence is a lesser challenge.

“Danny [Garcia] said I hit harder. I don’t got to drop you. If you get in the ring with Keith Thurman, you’re going to learn something. You’re going to know what kind of fighter I am. 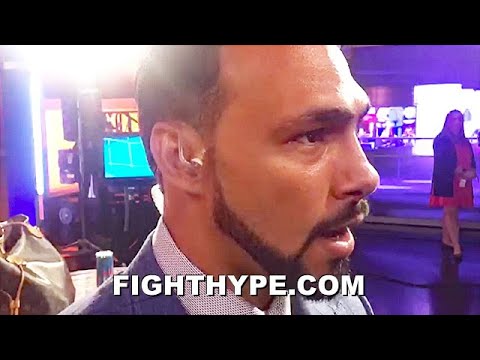 “I’ve always been a realist. I’ve got the best footwork at 147; I can fight backward. Pacquiao, I barely lost. I beat myself, baby.

“You got to know that sometime. Sometimes you beat yourself. That fight was in my hands.

“I didn’t throw the punches; I didn’t pull the trigger. I got to get trigger happy out here,” said Thurman.

Thurman should get over his loss to Manny because he’s not going to get a chance to run it back. Pacquiao enjoyed his win over him, and he’s not going to take the risk of losing to Thurman in a rematch at this point.

Besides, with Thurman not having fought in two years, the money won’t be huge for Pacquiao.