Joe Joyce: ‘Takam is coming to win, he wants Joshua’

By William Lloyd: Joe Joyce will be looking to lock himself in as the WBO mandatory challenger to IBF/WBA/WBO heavyweight champion Anthony Joshua this Saturday, July 24th, when he takes on former world title challenger Carlos Takam in a 12 round fight at the Wembley Arena in Wembley, London, UK.

The unbeaten 2016 Olympic silver medalist Joyce (12-0, 11 KOs) only needs to defeat the upset-minded #14 WBC Takam (39-5-1, 28 KOs) to put himself in the waiting spot to eventually fight for a world title against whoever holds the WBO title.

The winner of that fight will be facing the winner of the October 9th trilogy match between WBC heavyweight champion Tyson Fury and Deontay ‘Bronze Bomber’ Wilder in February 2022.

Presumably, the Joyce vs. Takam winner will get a shot at the eventual holder of the WBO belt in either late 2022 or early 2023.

Takam wants to earn a second shot at Joshua after losing to him by a tenth round knockout in October 2017 in Cardiff, Wales. That was a fight in which the referee Phil Edwards appeared to act hastily in stopping the fight after Joshua threw a mini flurry of punches.

Takam was throwing shots back at Joshua at the moment that Edwards jumped in and stopped the fight and looked very odd.

Hopefully, this Saturday, we don’t see a referee halting the fight prematurely when Joyce, #2 WBO, #5 WBC, #10 IBF, battles Takam in the 12 round headliner on BT Sport. There’s too much on the line for the referee to spoil things.

“Yeah, he wasn’t too pleased about that. Sam [Jones] has a way of doing that, and he nearly came swinging for him maybe,” Joyce said about Takam being upset about his manager Sam Jones keeping tabs with Carlos’ sparring sessions.

“I think it definitely got him thinking, ‘What’s he seen?’ We’ll see how that plays out. It’s plausible deniability.

“He’s [Takam] definitely getting a little hot under the collar and a bit flustered, and maybe he’s getting under his skin.

“He’s coming to win and wants that last shot at [Anthony] Joshua, but that’s not going to happen because he will have to face me,” Joyce said about Takam wanting a rematch with Joshua. 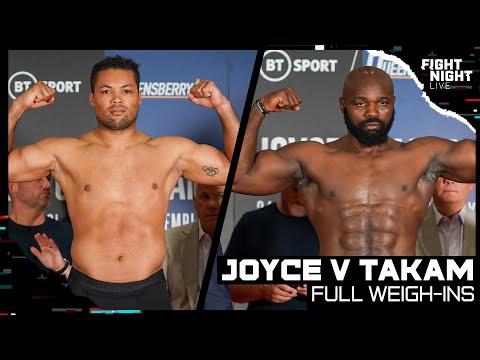 This is arguably the last chance saloon for Takam, as far as him being in a position to earn a world title shot. If he loses to Joyce on Saturday, it’s unlikely that he’ll ever get another opportunity like this again.

Coming into the fight, Takam has won his last four contests against lower-level opposition. These are the guys that Takam has recently beaten:

In July 2018, Takam was stopped in the eighth round by Derek Chisora. At the time of the stoppage, Takam appeared to be up on the cards and was doing well.

What led to Takam being knocked out was Chisora clipping him with a right hand to the side of his head that put him down.

After Takam got back to his feet, Chisora dropped him with another hard right to the head, and that was all she wrote. 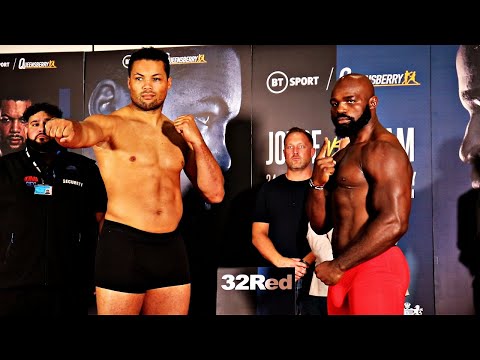 “I think it’s great preparation for any of them because Takam gave everyone a hard fight, and he’s going to give me a hard fight,” said Joyce.

“This is something I’ve been preparing for, and he’s had a long time to prepare for it as well. It’s going to be a tough one, but I’m winning.

“Definitely, that’s what I’m in this sport for [to become a world champion]. I believe in my abilities, and I’ve picked up many belts along the way, and that’s obviously icing on the cake, a world title.

“This is the reason why I’m going down the WBO route, and I’m ranked #1 after [Oleksandr] Usyk and Joshua get it on. Yeah, it’s a great position. I just need to get through Takam, and I’m well on my way,” Joyce said.

Takam is decent preparation for Joyce to fight for a world title against AJ, Fury, Usyk, or Wilder, but you can’t say it’s the ideal fight.

There are far better heavyweights in the division than the 40-year-old fringe contender Takam. Of course, it’s quite understandable why Joyce’s promoter chose to match him against Takam.

With Joyce’s high ranking with the World Boxing Organization, it would be too risky to put him in with a dangerous contender like Filip Hrgovic, Frank Sanchez, Joseph Parker, or Andy Ruiz Jr. Why take a fight with any of those guys when you don’t have to?

Takam is a good fighter, but he’s not the type of guy that Joyce should be facing if he wants to prepare to battle world champions Joshua or Fury. He needs to be facing a talented younger heavyweight like Sanchez or Hrgovic.

Even Ruiz Jr isn’t good enough to prepare Joyce to challenge for a world title. A rematch with Daniel Dubois would be excellent preparation as well for Joyce.

Joe predicts many exchanges with Takam

“They can expect a lot of exchanges,” said Joyce when asked what boxing fans can expect to see in his clash against Carlos Takam on Saturday, July 24th. 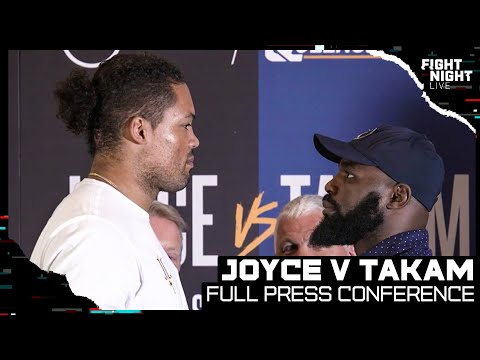 “He’s coming to win, and I’m coming to win. So it’s going to be two guys going at it for twelve rounds if it lasts that long.

“I think that was Sam [Jones], to be honest,” when Joyce was told that he labels his fight with Takam as a ‘Car crash.’

“Just tune in and follow the rest of my journey to the world title, which is in touching distance. So yeah, happy days. Big Juggernaut,” said Joyce.

It’s definitely going to be a war this Saturday between Joyce and Takam from start to the bitter finish. With Takam’s power, you can’t rule out the possibility of an upset, but it’s still doubtful.

Takam has a lot of mileage on the clock, and he’s not likely to have enough left t this stage to beat Joe Joyce.