Fans outside the US can watch the fight card LIVE on FITE TV:

SHOWTIME CHAMPIONSHIP BOXING begins at 9 p.m. ET/6 p.m. PT and will see the hard-hitting unified champion Charlo and the exciting Argentine Castaño go toe-to-toe as all of the super welterweight championship belts are on the line for the first time in the four-belt era.

Here is what the fighters had to say:

“We have 10 days to go and I’m excited. This is the most important time of my life. I love this. I’ve been doing this since I was a kid. My experience inside and outside of the ring has all led up to this. Now is the time for me to put it all on the line.

“Castaño is going to leave everything in the ring. So we’re not playing any games. I’ve been training really hard. I’ve added things that have made me better because I know for a fact that this is going to be a great fight.

“I love my home state of Texas and I love fighting there. We’re bred differently. We’re a state that’s fought our own wars. This is huge. It’s a legacy fight for me and I’m ready for it.

“I know what I possess in the ring. When it’s time to fight, I instantly become the best warrior that there is out there.

“I’ve suffered my whole life, so there’s nothing in this world that can make me suffer more than what I went through growing up. Castaño is a great fighter who puts on a lot of pressure.

But I know my abilities and I know my power. Every punch I throw is dominant and every shot I throw is painful for my opponent. I have a lot of unique abilities in me and I’m going to bring some tricks into this fight.

“I haven’t punched Castaño yet so I don’t know what his chin will do when I hit him. I know he’s got a big heart. I’m just going to do what I do, which is what everyone knows that I do. Everyone sees what I can do each time I get into the ring.

“I’ve been feeling really good in training camp. Better than I’ve ever felt. I’m in my prime right now and I feel stronger fight by fight. I’ve been developing every camp.

“I’ve got belts on belts and he’s got one belt. I’m ready to take that strap too. I’ve been paying attention to what he’s been doing. I haven’t just been sitting around since I fought Jeison Rosario. I’ve been working.

“Right now I’m not worried about what’s happening after this fight. I can only focus on what’s in front of me. I’m tunnel-visioned right now. This is what I want and I can’t see anything outside of victory on July 17.

“This is a major fight because it’s history for me and my family. It’s huge for everyone that I represent and that’s been supporting me for all these years. It was due time to get in there for this fight. The belts and the money are not on my mind. What’s on my mind is the legacy.

“Not a lot of people get these opportunities. This fight is going to solidify a lot of different things in people’s minds about the Charlos.” 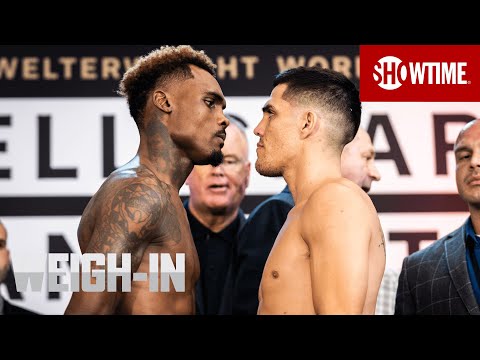 “This is one of the most important fights in Argentina’s history. It’s for four belts, undisputed at 154 pounds. It’s a great opportunity for my team, my manager, my family and most importantly, for me. This will be the hardest fight of my career.

“Charlo is a great fighter, there’s no doubt about it. But I came here to do my job and I’m going to come forward. I’m the type of fighter that is always going after you. I’m always there to pressure you. Even though Charlo said that I don’t have anything he hasn’t seen before, he has never seen anybody with my fighting style.

“I’ve seen Charlo knock down a lot of fighters with just one punch. That’s something to look out for. However, I have more of a variety in my arsenal than anybody he has fought before. If I have to be more aggressive and go for more power instead of finesse, rest assured that I can knock him down as well.

“Ring rust will not be an issue at all. I train every day. I spar three times a week. I’ve been training twice a day lately. I am in rhythm and in shape. I am coming for the four belts.

“On July 17, I can guarantee that I will bare my soul, I will leave my heart in the ring and do everything in my power to become the undisputed, unified champion of the world.

“I think that Charlo is in the prime of his career as well. That’s why I looked for this fight. This is the fight I’ve been looking for because we are both in the best moment of our career, and I want to take advantage of it.

“If I win, the glory would be equal to a potential Argentina World Cup title next year. However, soccer is different because you have ten other people that you can rely on.

Boxing is more of an individual challenge. Messi has ten teammates that he can pass the ball to when things get tough, but when I’m in the ring I’m on my own.

When I’m up against the ropes, I have to get out of it on my own. The glory and the excitement of a win would be the same as an Argentina World Cup for my country.

“I have not had the opportunity to meet Manu Ginobili, but he is an icon in Argentinian sports. He is one of the best ever and what he represents is iconic both as an athlete and as a person. He has both my admiration and my respect.

“I am aware that people may not know me, but I’m here to create my own path and pave my own way. I know that I haven’t fought that much lately and maybe that’s part of the reason why people don’t know me, but I turned down fights against opponents that weren’t of the caliber that I wanted to face.

My goal has always been to go up against the best of the best and the elite of my division. I have that chance now and I’m going to prove why I deserve this chance and why I’m worth following.”