Conor Benn: Adrian Granados will throw the kitchen sink at me on July 31

By Barry Holbrook: Highly ranked welterweight contender Conor Benn (18-0, 12 KOs) is expecting his fight this month against battle-worn Adrian Granados (21-8-3, 15 KOs) to be a war when they meet in the headliner on July 31st on DAZN at the Matchroom Fight Camp in Brentwood, Essex, UK.

Benn, 24, views this fight against the experienced veteran Granados as a stepping stone for getting a world title shot within his next three fights.

Granados’ once-promising career has fallen apart in the last six years, and he’s not likely to give Benn the type of experience that he’ll need for him to tackle the big dogs at 147.

Matchroom promoter Eddie Hearn is still treating Benn with kid’s gloves by matching him carefully against veteran fighters that have been around for a long time.

In Benn’s last fight, he stopped Samuel Vargas in the first round last April at the Copper Box Arena.

The fight stopped so quickly that you couldn’t say much about Benn. Unfortunately, the referee seemed to lose perspective by waving it off after a wild flurry of shots with half of them missing.

“Adrian Granados, I hope he brings it because I would love to demonstrate more work than the [Samuel] Vargas fight,” said Conor Benn to Boxing Social. “I’m not complaining.

“I don’t get paid for overtime. I’ll do exactly the same with Granados. I plan on demonstrating a lot of other attributes because I get to show different tools in my kit. This ain’t for now.

“It’s for when I to do fight for a world title, which is just over the horizon,” said Benn.

“Adrian Granados, Devon Alexander was mentioned to me, and I’m like, he’s getting on a bit,” said Benn about why he chose Granados to fight. “I thought he’s an old mate, it’s a lose-lose despite of what he achieved. He’s a little bit past it.

“We tried to fight with Chris [Algieri].  So that didn’t materialize. Jordy Weiss would have been a great opponent for me. The world title is my ultimate goal, and I’m ranked high by everybody,” said Benn.

Conor wants Granados to go on the attack early so that he can be tested in this fight. We’ll see if Granados has enough left in the tank to do that. Adrian has lost to these fighters in the last six years:

Only Danny Garcia has stopped Granados, which tells you how hard it is to knock him out.

It would be a huge badge of honor if Benn can KO Granados as well, as long as it’s not another premature flurry stoppage like we saw in Conor’s last fight against journeyman Samuel Vargas.

Granados will throw the kitchen sink at Conor

“Say that this is his last chance,” said Conor Benn about Granados. “This is the biggest platform, to get ranked by every governing body, he surely knows he’ll be coming out to throw the kitchen sink at me.

“But then again, you know what I’m doing. He can do what he wants. I’m not worried about what he’s doing.

“I don’t care what he brings. Bring the heat. Bring whatever you bring, and I’ll figure you out relatively quickly,” Benn said.

Fighting Granados isn’t going to do much for Benn’s career, so hopefully, he does not see this match-up as a barometer of how he’ll do against top-five fighters.

Granados, 31, has lost two out of his last four fights, and he’s not expected to give Benn much of a fight.

If Benn flurries on Granados the way he did in his last fight against Samuel Vargas, he might get a fast referee stoppage.

However, Benn will not learn much from getting premature stoppages because he likely won’t get away with that when he fights in the United States.

In the U.S, the referees tend to let the fights go, and they’re not fooled by fighters that throw flurries to get quick stoppages.

Benn needs to use the fight with Granados to hone his skills to get ready for old lions like Keith Thurman, Danny Garcia, or Josesito Lopez.

Benn expects to fight for the world title within 3 fights

“If my career goes where I think it’ll go, I could fight for a world title in three fights if I do what I believe I’m going to do,” said Benn.

“It’s a five-fight deal [with Matchroom Boxing]. The five-fight deal is good. I can’t complain. I’m not even thinking about that at the minute,” Benn said on which direction he’ll be taken in for his world title honors. 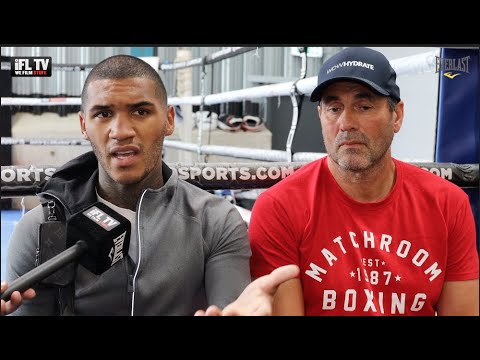 “So these fights are going to get me to where I need to get to, and that’s what’s important. I’m 24-years-old. You can’t go wrong with learning fights.

“I trust my team, I trust Eddie [Hearn], there’s going to be a tremendous amount of cash, and they’re going to help me win world titles and be a world champion. That’s the end goal.

“100%,” said Conor when asked if he believes there will be talks of him fighting Shawn Porter and Amir Khan within his new five-fight deal with Matchroom.

“Amir Khan potentially. If he thought I was easy money, he’d take the fight. It’s a backwards step massively for them,” said Benn.

It’s doubtful that Conor Benn will get a fight against Shawn Porter or Amir Khan within his next five fights.

For that to happen, Benn will need to beat some of the talented contenders or champions in the 147-lb division.

Looking at the type of guys that Matchroom is putting Conor in with, he’s not going to be ready to challenge IBF/WBC champion Errol Spence Jr or WBO champion Terence Crawford anytime soon.

It would be a mistake for Hearn to let Benn fight either of those champions within his next five fights.

Benn’s best bet is to go after contenders like David Avanesyan, Vergil Ortiz Jr, and Jaron Ennis to show he’s ready for a world title. If Benn can’t beat those guys, he shouldn’t be fighting for a world title.


« Billy Joe Saunders wants to see what his options are