By Barry Holbrook: In terrible news for the Matchroom Fight Camp for this Saturday, the headliner fight between welterweight contender Conor Benn and Adrian Granados is now off the card following Benn’s positive test for COVID-19. 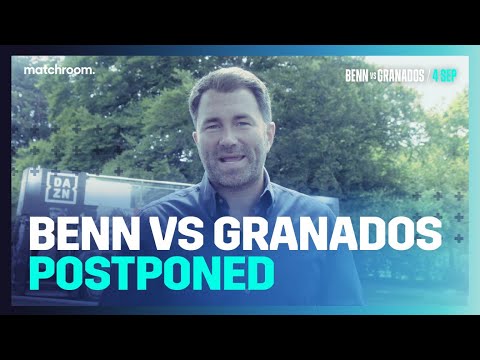 The good news is the title fight between the exciting WBA ‘regular’ featherweight champion Can Xu and #12 WBA Leigh Wood has been moved into the main event on the card.

“Breaking news and slightly disappointing news that Conor Benn has failed his COVID test this morning for his upcoming fight against Adrian Granados,” said Eddie Hearn on Twitter.

“We are conducting further PCR tests, but he will be off the card on Saturday night. Luckily, it’s a stacked card from top to bottom.

“Avni Yildirim will be moved before the bell to the main broadcast, and the world championship fight between [WBA ‘regular’ featherweight champion] Can Xu and Leigh Wood will now headline Week 1 along with the co-main event between Tommy McCarthy and Chris Billiam-Smith for the British Commonwealth and European Championship.

“Conor Benn is in good spirits; he feels well. Of course, he’ll obey the isolation rules and reset and reschedule his fight with Adrian Granados.

“We’ll make further announcements on that very soon, but for now, we move to the press conference ahead of a huge night on Saturday, and we look forward to seeing you there,” said Hearn.

BREAKING: Conor Benn has tested positive for COVID-19 and is out of Saturday’s Fight Camp main event vs. Adrian Granados. New date to be announced shortly.

Hearn didn’t say whether Conor Benn had received a vaccine for COVID-19. Angry boxing fans are already demanding to know why Hearn hadn’t checked to ensure that the 24-year-old Benn had been vaccinated for COVID-19, particularly after the mess that Tyson Fury had recently created when he tested positive for the virus for his trilogy match against Deontay Wilder.

This would have been worse news if Benn was facing a top-tier welterweight, but this was another lower-level opponent.


« Conor Benn = one or two fights behind Virgil Ortiz Jr

Hearn comments on Arum wanting Joshua vs. Fury in UK in 2022 »