By Dan Ambrose: Andy Ruiz Jr is looking in great shape, hitting the weights working out for his next fight in October against a still to be determined opponent.

Ruiz Jr trying to transform his physique to improve his game because he’s not performed well in his last two fights against Chris Arreola and Anthony Joshua.

Former IBF/WBA/WBO heavyweight champion Ruiz Jr (34-2, 22 KOs) has slowly been transforming his physique since ballooning up to 313 lbs after his 12 round decision defeat against Anthony Joshua in December 2019.

Despite the weight loss, Ruiz, 31, hasn’t performed anywhere near the same level as he did in his first fight with Joshua in June 2019. For that fight, Ruiz was a flabby 268 lbs, and yet he knocked Joshua down four times en route to stopping him in the seventh.

Ruiz will get a chance to show what his new physique can do in the next three months when he returns to the ring for his next fight.

We learned recently that Ruiz Jr WON’T be fighting Dillian Whyte, and it’s unclear when in the future they’ll fight, if ever.

Whyte was one of the two fighters that Ruiz Jr had mentioned as a potential option for his next fight. The other is 42-yer-old Luis Ortiz, who hasn’t done much since getting stopped for the second time by former WBC heavyweight champion Deontay Wilder. 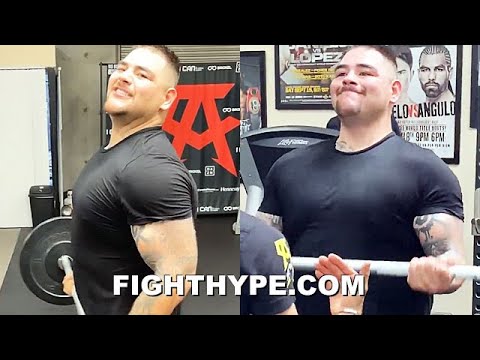 Ruiz, 31, and his fans want a trilogy match against Anthony Joshua, but he’s doing much to put himself in position for that third fight. Now, Ruiz Jr has been calling out Joshua, coming across as a fighter just looking for a payday rather than someone who actually wants to earn the fight.

Ruiz Jr is arguably the equivalent of a struggling NFL team, asking to be allowed to play in the Super Bowl after being beaten. It’s more than a little disturbing that Ruiz Jr. hasn’t shown the desire to work his way back to a fight with Joshua rather than taking the backdoor method by fighting 40-year-old over-the-hill Chris Arreola.

It’s going to be interesting to see who Ruiz Jr fights next. If he’s serious about wanting a third fight with Joshua, he must face a quality heavyweight from this list:

42-year-old Luis Ortiz has gotten too old to be viewed as a true stepping stone for Ruiz to use to get a trilogy match with Joshua. If Ruiz wants to get a third fight with Joshua as quickly as possible, he’s got to take on the likes of Whyte, Sanchez, Joyce, Dubois, or Hrgovic.

If Ruiz’s last fight against Arreola was an indication of the direction his career is going in, he’s not going to stand much of any chance of beating any of the above-mentioned heavyweights.

Arreola dropped Ruiz Jr. in the second round and had him hurt a couple of times in the fight. If Ruiz is getting dropped by 40-year-old guys like Arreola, his chances against quality heavyweights are poor.

A lot has been made about Ruiz Jr being trained by Eddy Reynoso, the coach that works with Canelo Alvarez, Oscar Valdez, and Ryan Garcia, but he hasn’t shown any improvement.

Reynoso is a good coach, but a lot of the credit he gets is because of Canelo, a fighter who learns from observation from studying other fighters. Ruiz Jr is under the impression that Reynoso is the magic coach that will transform his game, and he’s clearly not seeing reality. Canelo would be great with any trainer.


« Conor Benn confident of victory over Adrian Granados on July 31