It’s been ages since Pacquiao last fought in 2019 against Keith Thurman, and that version that we saw of him probably wouldn’t have been good enough to beat Spence.

Pacquiao squeaked by Thurman, who wasn’t at his best due to injuries and weight problems. Thurman realizes that he could have still beaten Pacquiao, even though he wasn’t at 100%.

‘One Time’ made a mistake in the opening round by backing up, not expecting Pacquiao to suddenly charge forward to deliver a blow that put him down.

Pacquiao seems to have trimmed down from the bulky form that he had when he first started training for his fight with Spence. With the help of the horde of fans that follow him around on his long runs, Pacquiao almost looks like the fighter he was 10+ years ago.

However, he’s still not as lean as he was when he beat guys like Ricky Hatton, Miguel Cotto, Antonio Margarito, and Joshua Clottey during his best years.

“I give Spence the edge because of the natural size and the youth,” said Andy Lee to DAZN Boxing Show. “You just can’t write off Pacquiao. People said the same both time and as a more methodical guy, very steady.

“Manny is very strong. Pacquiao is obviously explosive and fast and has a bouncing rhythm,” said Lee. “It could be a classic, could be a war.”

Lee doesn’t go into his rationale for picking Pacquiao to beat Errol. One gets the sense that Lee is picking Pacquiaof for old time’s sake rather than him honestly believing that he can beat Spence, and that’s not a way to make a prediction.

In watching Spence workout this week, he and his trainer Derrick James are focusing on punching and moving. From Errol’s last fight against Danny Garcia in December, he realizes that he can’t stand there flat-footed against Pacquiao and expect to win.

You’ve got to believe that if the rounds or even slightly close, the judges will give them to the A-side fighter Pacquiao.

If Pacquiao loses the fight, it’s not the end of the world for him. He will have been beaten by the #1 welterweight in the division, and there’s no shame in that.

Getting beaten Mikey Garcia would be awful for Pacquiao if he’d taken that fight, which is the one that his trainer Freddie Roach was pushing for.

There will be a lot less of a backlash for Manny if he gets beaten by Spence compared to someone like the semi-retired Mikey, who hasn’t fought in ages. 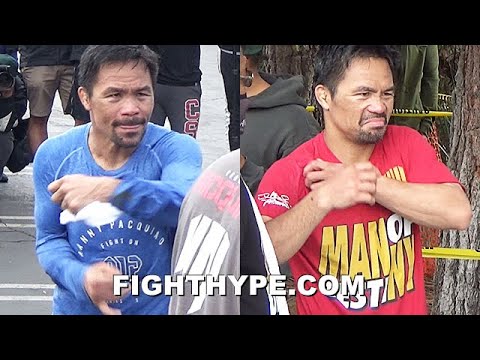