Matchroom Fight Camp returns with 3 back to back weekends 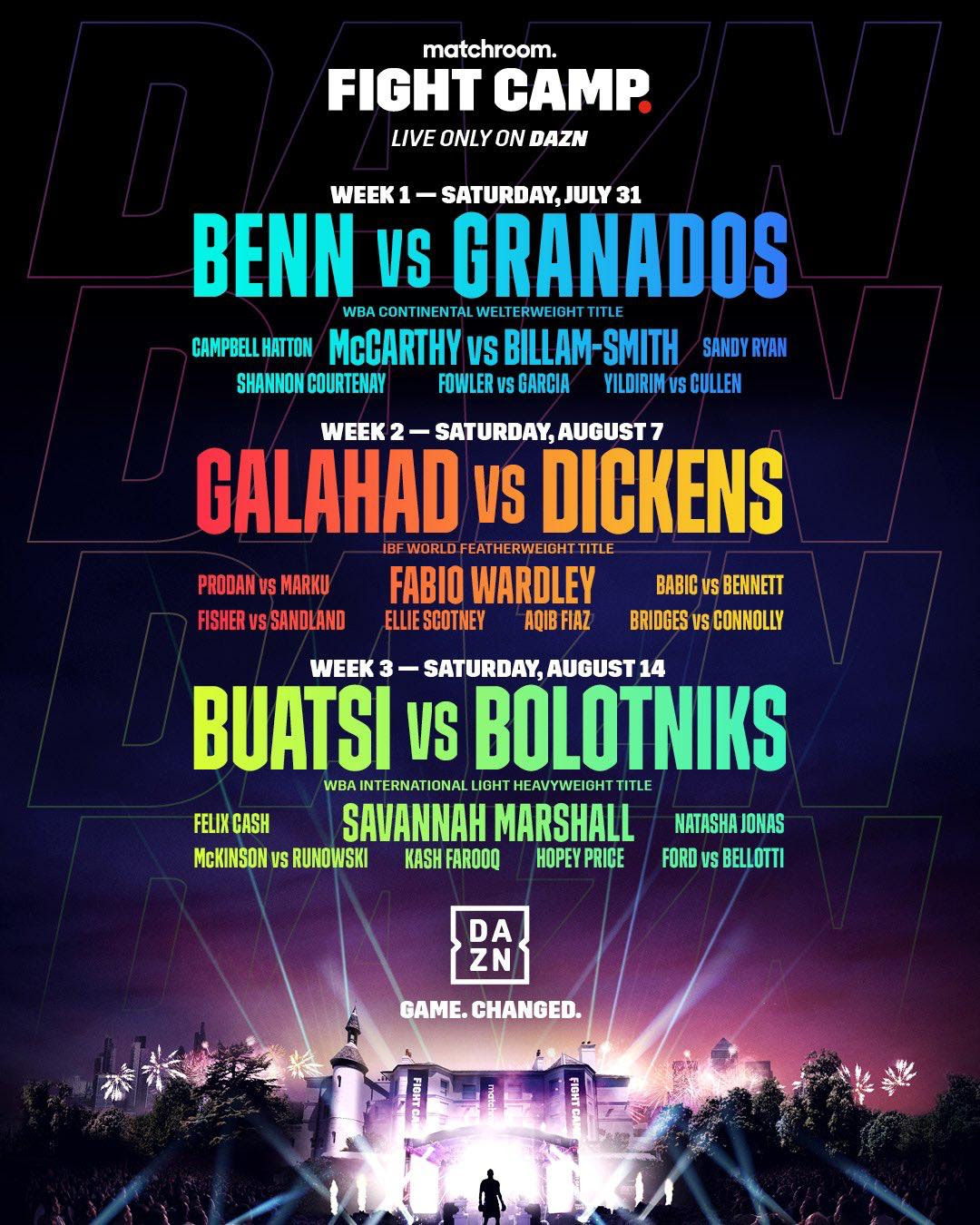 Matchroom and DAZN are delighted to announce the full schedule for the second installment of Fight Camp – an unmissable summer of boxing based at the stunning Matchroom HQ in Brentwood, Essex – with all of the action broadcast live worldwide on DAZN for the initial monthly price of just £1.99 in the UK and €1.99 in Ireland.

Last summer, the unique and ground-breaking outdoor setting played host to memorable World Title clashes, British and Commonwealth Title showdowns, Heavyweight wars, and countless other Title fights as Matchroom brought top tier boxing back to the screens of fights fans across the world – resulting in a nomination for Event of the Year at the Sports Industry Awards 2021.

DAZN, the leading global sports streaming platform, will kick off its landmark deal with Matchroom with an exhilarating Fight Camp series that features all-British World Title action, keenly anticipated domestic and European Title showdowns, some of the very best up-and-coming stars from Matchroom’s unrivaled stable of talent and much more.

This year’s sizzling summer schedule is set to be even bigger and better as Matchroom open their doors to fight fans – with a limited number of tickets going on sale for each event – which is sure to help create a special and unique atmosphere.

Sheffield’s Kid Galahad (27-1, 16 KOs) and Liverpool’s Jazza Dickens (30-3, 11 KOs) meet in an all-British clash for the vacant IBF Featherweight World Title at the top of Week 2 on Saturday, August 7.

Popular Australian Ebanie Bridges (5-1, 2 KOs) went to war with Shannon Courtenay last time out and returns to the UK to face Bec Connolly (3-9) over eight rounds

Hartlepool’s Savannah Marshall (10-0, 8 KOs) makes the second defense of her WBO Middleweight World Title as she pushes for unification fights.

Wokingham’s Felix Cash (14-0, 10 KOs) blitzed Denzel Bentley in three rounds last time out and puts his Commonwealth belt up for grabs again in the Matchroom garden.

To become a subscriber, download the DAZN app on any internet-connected device, including living room devices such as smart TVs, streaming sticks, and game consoles, as well as smartphones, tablets, laptops, and PCs. For more information, visit www.DAZN.com

Information on the limited tickets available for Fight Camp will be announced in due course.


« Eddie Hearn says “forget about” Joshua – Fury, focus is on Usyk next

Kambosos on Teofimo Lopez: ‘He’s overhyped’ and a quitter »