Logan Paul responds to Mayweather having knocked him out talk

By Chris Williams: YouTuber Logan Paul took to social media on Monday to deny that Floyd Mayweather Jr kept him in the fight after knocked him out on his feet in one of the rounds.

The narrative going around on social media is that Mayweather (50-0, 27 KOs) propped Logan up after knocking him with a big shot. Floyd made sure that he didn’t finish Logan after stunning him.

In other words, if Mayweather hadn’t held onto Logan, he would have fallen to the canvas like a ragdoll.

Paul looked hurt in the third

Chris Williams thought he saw Mayweather stun Logan in the third with a massive right hand. But instead of going after him to finish the job, Mayweather chose to hold him.

It looked like Mayweather propped Logan up in the third round after nailing him with a powerful right hand on his lantern jaw.

I must say, it did look like Mayweather saved Logan by not hitting him when he was in that vulnerable state.

What some boxing fans believe is Mayweather wanted to make sure that Logan, 26, went the full eight rounds so that he could increase the chances of a lucrative rematch.

Obviously, if the 44-year-old Mayweather had knocked out Logan there would be no chance for a second fight, which would mean no big payday.

Logan denies being knocked out

“The morning after the fight, not too shabby for fighting the best,” Logan Paul said. “I’m seeing this narrative going around where there’s one part of the fight where Floyd punched me and I kind of leaned down a little bit. It looks like I kind of went limp, and people are trying to spin it and say that he knocked me out and caught me, and kept me up to keep the fight going to the eighth round.

“Shut the f**k up, stop trying to discredit what happened last night. Make no mistake, he got a lot of good punches in.

“There’s a couple of photos where I got f**ked up a couple of shots. I didn’t know my face could make that shape, but I was never rocked, and I never blacked out, never obviously got knocked out.

“He didn’t hold me up. He tried to take me out, and he couldn’t. It was great,” said Logan.

Obviously, Logan was never knocked out in the fight, but he did look like he was on the verge of being stopped in the third.

Mayweather is a clever fighter, and him knowing that if he stopped Paul, that access to the rich plunder from his YouTube fans would be over.

Why would Mayweather do away with one of his revenue streams by stopping Logan? I would have done the same thing if I was Mayweather. Why do away with the golden goose before Christmas? 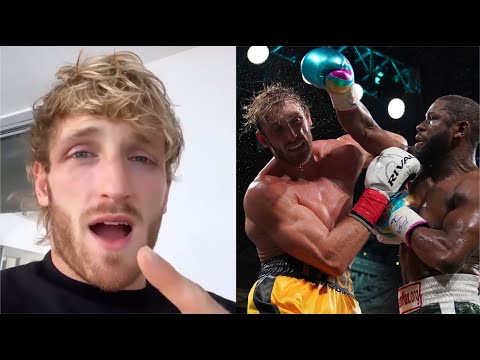 Mayweather: A win for Logan was to go 8 rounds

“I could have pressed real, real hard and thrown some crazy combinations,” said Mayweather about him believing that he could have stopped Logan if he’d wanted to. “His goal was to survive and that was a win for him.”

Chris Williams totally agrees with Mayweather. It did look like Logan was just trying to survive after the third round. The way that Logan was celebrating going the eight-round distance, you could see that it was a moral victory going the distance with the legend.