Logan Paul: ‘Floyd may have run out of time’

By Jeff Aronow: Logan Paul believes the 44-year-old Floyd Mayweather Jr is beatable because of his age, ignorance, and belief that he can’t be beaten.

The YouTuber Logan realizes he doesn’t have the long background in boxing or the pedigree that Mayweather possesses, but he does have youth and size going for him.

Paul, 26, feels that he’s learned enough in the two years he’s been involved in boxing to defeat the smaller, older Mayweather.

This isn’t the prime that we all knew from years ago. Mayweather has been retired for years, and he’s on his way to becoming a billionaire.

Logan: I believe I can win

“I imagine he’s going to be running from me. It’s little Floyd,” said Logan continued.

“Floyd, you want to trade shots with me? Conor McGregor, me,” said Logan when told that Mayweather imposed himself on Conor McGregor in 2017.

“I grew vertically and horizontally. Conor McGregor, a big name, small guy. Me, little name, big guy. This is everything I’ve ever stood for, and this is the epitome of it.

“Nobody in the world this I can win this fight, but I f**king do, and my team does. That’s been my whole mentality with everything I’ve ever done. I think I can do it.

“This is the tailend of redemption I set out three yeas ago after the Tokyo thing. I vowed to become a better person offline, worked on myself publically, and this is going to prove to people that you can be at the lowest of the low whether it’s your fault or not,” said Logan Paul.

Obviously, Mayweather won’t attempt to trade with Logan early in the fight because he knows he could run into something.

Also, with Mayweather’s advanced age, he’s not going to take the risk of starting fast and tearing a joint or a muscle. He’s a really old guy and arguably 10 to 15 years older than his chronological age of 44.

In other words, Mayweather is closer to 54 or 59 than he is 44. When getting someone that age, they can be beaten by a younger, larger fighter that doesn’t possess great talent.

“I’ve seen a lot [of Mayweather’s fights], but it’s Floyd, he’s going to come with whatever,” said Logan Paul.

“We got to be prepared for anything, he’s a dog. He’s got every weapon in the shed.

“What do I think makes him beatable? His age, his slow, his ignorance” said Logan when asked what makes him believe he can beat Mayweather.

“He doesn’t think it’s possible for him to lose. News flash, everyone loses.

“Everyone is going to take that shot and push themselves a little too far, and a little too long and Floyd may have run out of time.

“Strategic, I play chess with my fists. I’m a boxer, not a brawler. Six,” Logan said when asked which round he’s predicting a knockout of Mayweather.

“I’d box Conor, he’s pretty good MMA. I think a Conor fight would be crazy. I can’t not step on my brother’s toes because he was trying to make that fight [with McGregor] happen.

“I’ve got to respect if Jake wants to fight Conor. After I beat Floyd, sure, put Conor on the hit list, f*** it.

“Boxing with Canelo? No, but I’d do MMA with Canelo, for sure. But guess what? He’ll never do it. He’s tough in his sport, but he’d never do MMA, that’s crazy,” said Logan.

It’s true Mayweather feels this is a gimme for him, which has been reinforced by his comment that this fight is “legalized robbery.”

If the fight is as one-sided as Mayweather is predicting it’ll be, the fans will be the ones that wind up robbed because they’ll be paying for it. 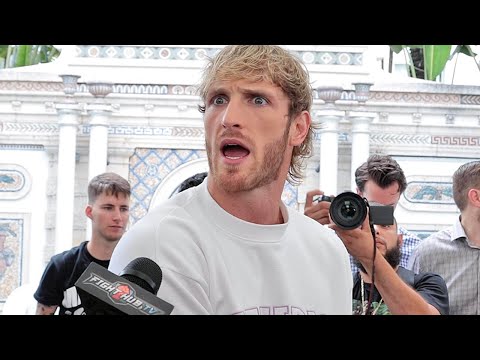 
« Keith Thurman out of luck, Errol Spence refuses to fight him

Fury vs. Wilder 3: What can we expect from Deontay? »