By Sean Jones: Mayweather Promotions CE Leonard Ellerbe is confident of his fighter Gervonta ‘Tank’ Davis coming out victorious in his fight this month against WBA ‘regular’ light-welterweight champion Mario Barrios on June 26th on Showtime PPV. The fight will be taking place at the State Farm Arena in Atlanta.

Ellerbe sounded a little upset at times on Thursday, saying that the media will give credit to Tank Davis (24-0, 23 KOs) “whether they like it or not” for moving up two weight classes t challenge Barrios (26-0, 17 KOs) for his WBA secondary belt.

The media and the boxing public aren’t impressed with what Tank, 26, is doing, going up to 140 to take on the little-known Barrios, seen as the weakest link.

Mayweather Promotions’ decision to match Tank Davis against Barrios makes them look like cherry-pickers because they’re not choosing the undisputed 140-lb champion Josh Taylor. Heck, they’re not even picking the #2 or #3 guys at light-welterweight in Jose Ramirez or Regis Prograis.

“Tank is going in there, and he doesn’t get the credit that he deserves for even moving up two weight classes,” said Mayweather Promotions CEO Leonard Ellerbe on Gervonta Davis, going up to 140 to take on WBA champion Mario Barrios.

“He’s challenging the young undefeated guy [Barrios], but you guys are going to start giving Tank his credit whether you like it or not,” Ellerbe continued.

I hope Ellerbe doesn’t hold his breath too long waiting for the media/fans to give Tank Davis the credit he feels he deserves to go up to 140. It’s not going to happen.

If anything, Tank will be trashed by the fans for his lack of courage to take on Taylor, Prograis, or Ramirez at 140.

“That very well might be his downfall. But [Barrios’ trainer] Vergil Hunter is going to have a great game plan.

“The last time I talked to Hunter, he said, ‘I hate to do this to you, but Tank is going to take that L.’ We’re going to see on the 26th of June.

“He’s an old-school coach, and they think they’ve seen some weakness in some of the things Tank does.

“He’s looking, they think, to capitalize on it. I don’t think so, but he’s going to go in there and try and see what the results are,” said Ellerbe.

Barrios is just a basic plodder and looked awful in his recent fight against Ryan Karl. He didn’t resemble a world champion in that fight and was so bad.

That’s obviously why Ellerbe and Mayweather Promotions has picked Barrios out for Gervonta to fight for a world title. They know he’s an easy mark. 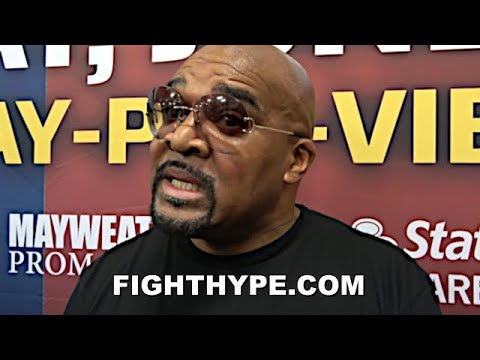