Jermall Charlo not frustrated at failing to get Canelo, GGG or Andrade fights

Interestingly, Charlo (31-0, 22 KOs) says he’s not worried about not getting the big fights against those guys, and he’s just going to keep defending his WBC middleweight title to prolong his reign as the champion for that organization.

Fans believe that Charlo is terrified of stepping it up against dangerous opposition for fear he’ll lose. He’s had offers to fight Demetrius Andrade and David Benavidez and failed to go after the fights.

In the case of Canelo, Charlo says the Mexican star has to come down to 160 if he wants a fight because he won’t go up to 168 to fight.

Charlo, 31, is making a voluntary defense against the little-known contender Juan Marcis Montiel (24-4-2, 22 KOs) on June 19th in the main event on Showtime Championship Boxing at the Toyota Center in Houston, Texas.

Montiel, 27, is a fighter that was knocked out by Jaime Munguia in two rounds in 2016 and later held to a 10 round draw against Hugo Centeno Jr. Charlo is content with fighting this type of opposition, and that’s really troubling because it suggests that he lacks ambition.

“The way that I beat the guys that they beat, I take them out and make it look easy,” said Jermall when asked how the fans can know who the best fighter is at middleweight.

“I just got to continue to hold onto the strap and protect my legacy at the same time. I don’t know, man. The middleweight division is very complicated, but the fights are there. I guess real soon you’ll get a chance to see them. Until then, I’ve got to reign as a champion. 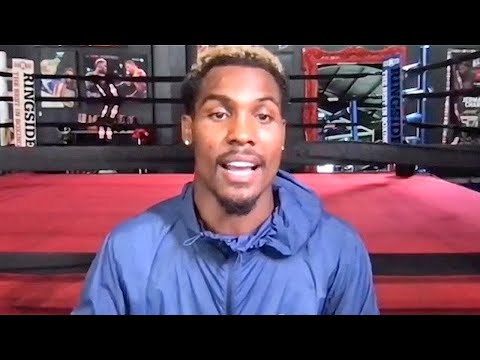 “We tried every time,” said Jermall when advised that he should talk to his management about having them try to set up fights with Gennadiy Golovkin, Demetrius Andrade, and Canelo Alvarez,” said Jermall.

Unfortunately, the boxing public isn’t buying Charlo’s excuses for why he’s not fought GGG, Andrade, Benavidez, and Canelo. They see Jermall as being content and lacking ambition.

Some fans see Charlo as being afraid to take risks, so he’s more than happy to fight the weak fodder that his management feeds him in terms of opposition.

“When I fought, I fought Derevyanchenko. We tried to go attack Golovkin. Canelo moves up and schedules another bout with someone else.

“Demetrius Andrade, he fights somebody that nobody knows. Look, we tried. The only thing I can do is focus on Montiel. I’m not frustrated by it. I’m the champ.

“Apparently, if they want to unify, they’ve got to figure out a way to make it work,” said Jermall in sounding content at not getting fights against GGG, Canelo, or Andrade.

“It’s like he don’t know where he wants to be at. He had a chance to sign me, so that’s his loss. Golden Boy is at the bottom of the totem right now. Nobody cares about that,” said Jermall.

Oscar De La Hoya didn’t attack Charlo. He was praising him by pointing out to the boxing public that Canelo has been avoiding him.

It’s unclear how or why Charlo got things twisted in his head to think De La Hoya was being critical of him or calling him out.

If Charlo paid attention to what De La Hoya said, he would have known that he made him look good by saying that Canelo wants no part in fighting him.

The rise and inevitable fall of Deontay Wilder »