Jaime Munguia vs. Kamil Szeremeta – preview for Saturday on Dazn

By Sean Jones: Former WBO junior middleweight champion Jaime Munguia will be facing replacement opponent Kamil Szeremeta this Saturday, June 19th, in the headliner on DAZN at the Don Haskins Center in El Paso, Texas. The start time for the Munguia vs. Szeremeta card is at 3:30 ET/1:30 pm. PT.

The former middleweight world title challenger Szeremeta (21-1, 5 KOs) is stepping in to replace Maciej Sulecki, who suddenly pulled out of the fight.

Szeremeta, 31, is fresh off a seventh-round stoppage defeat against IBF middleweight champion Gennadiy Golovkin last December. Fans gave Golovkin partial cover for defending against Szeremeta because he was the IBF mandatory.

It’s hard to believe Szeremeta was the mandatory, given his poor resume and the way he looked so overmatched. 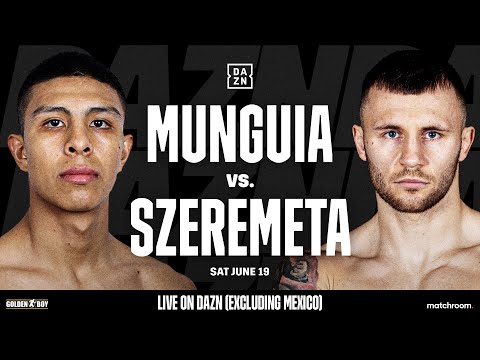 Thus far, the 24-year-old Munguia has beaten Gary ‘Spike’ O’Sullivan and Tureano Johnson. Szeremeta is a step down from those two guys, as they were tough and gave Munguiaa something to think about.

“There’s been a bit of chaos making this fight because Munguia was originally going to fight [Maciej] Sulecki,” said Paulie Malignaggi to BOXXER.

“Then Sulecki pulled out randomly, and then Szeremeta, who is also a Polish fighter.

“Szeremeta isn’t a bad fighter, but we’ll see how he handles the toughness and the skill.

“I’ll probably angle for Munguia, but I don’t think it’s that easy of a fight. Munguia hasn’t been that impressive as of late,” said Malignaggi.

Szeremeta didn’t look tough against Golovkin. He wasn’t landing anything and was taking punishment from GGG until he was stopped in the seventh.

With Munguia’s heavy hands, youth, and ability to push a fast pace, Szeremeta will have a great deal of trouble against him. The way that Szeremeta caved in against Golovkin from getting hit with jabs, he won’t last long against Munguia with the way he’s going to be nailing him with shots.

“I have a lot of experience when it comes to opponent changes,” said Jaime Munguia. “Obviously, it’s different at this level because the preparation is stronger and more strategic.’

Munguia looked flawed when he fought at 154, and he was lucky to get a win over Dennis Hogan in 2019.

Although Munguia has looked better since moving up to 160, he hasn’t shown the kind of ability that suggests that he would beat any of the champions at 160.

Munguia wants a title shot against the 39-year-old Golovkin, but he’s failed to land the fight yet. If Munguia fights him, Jermall Charlo, or Demetrius Andrade, he’ll lose.

“I’ve taken it very calmly, and we are going to make the necessary adjustments to walk away with our hand raised in victory on June 19,” said Munguia about his change of opponent.

Tyson Fury: Wilder would KO Joshua, the businessman, in the 1st round »