Lubin and Rosario will meet in a WBC Super Welterweight Title Eliminator in the co-main event. At the same time, Williams and Mendoza square off for a 10-round super welterweight showdown on the pay-per-view telecast. The telecast also features hard-hitting Olympian Batyr Akhmedov stepping in against former world champion Argenis Mendez in the opening bout at 9 p.m. ET/6 p.m. PT.

Tickets for the live event at State Farm Arena, promoted by Mayweather Promotions, GTD Promotions, and TGB Promotions, are on sale now and purchased at ticketmaster.com.

Here is what the press conference participants had to say Thursday:

“This has been the best camp of my life. I know it sounds cliché, but it really has been. I’ve been in the gym since my last fight. I made a few mistakes in that fight, but Kevin Cunningham and I have been at it since last year, and we’re coming to make a statement. 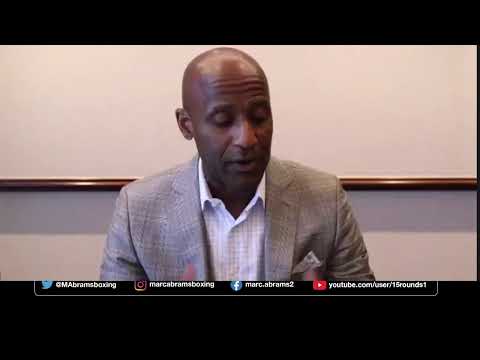 “This is a stacked card, and we’re excited to be a part of it. I’m ready to show everyone that I’m the best fighter in this division.

“This is going to be a fan-friendly fight. I can mix it up, box or bang. Rosario always comes forward. The fans are going to love it. I’m not the fighter who tries to find an easy way out. I’m looking to make a statement.

“I think that I’m a totally different fighter than when I trained with his coach, Herman Caicedo. Me and Kevin have worked on a lot of things that regular southpaws don’t have. I’m coming in with a game plan that’s like a jigsaw puzzle. I think this is the wrong fight for Rosario to take, coming off a knockout loss.

“This fight comes down to who wants it more and who prepared better. I have power too. He’s got to have the skills and have his mind there. I know I’m ready mentally. I can’t wait to fight.

“I gained a lot of experience fighting Nathaniel Gallimore and Terrell Gausha. Those are top contenders. I don’t want any tune-up fights. That’s why I took this fight against Rosario. I gained a lot of confidence, and everything is clicking for me right now.

“When I become world champion, I want to be able to say that I’ve beaten all the top guys in the division. That’s just how I am. I’m a competitor. Make sure you tune in on June 26.

“It doesn’t matter if I knock Rosario out or if I don’t. My job is to look good and come out victorious. I’m going to go in there and show the world that I can make anyone in this division look bad.”

“I feel very healthy and powerful. It’s been a great camp so far and probably one of the best camps I’ve had in my career. I’m already at the weight, and I am ready to go. The Jermell Charlo fight is the past. That’s over with. This is a new camp, and I feel extreme. We’re moving forward.

“I changed trainers just because I was looking for a change. Not necessarily because I lost, but because it was just the right timing. Unfortunately, it came with a loss, but that was not the reason for the change. We’ve known each other for some time. I know Herman Caicedo’s style. It’s no-nonsense. No excuses. It’s all or nothing, and that’s what I wanted moving forward.

“First and foremost, I have the power to knockout Lubin and anybody in the 154-pound division. The camp that I’ve had, and the little tidbits of southpaw knowledge that I’ve picked up on, make me confident that I can knock Lubin out.

“What happened in the Charlo fight was the fluke. Me winning the titles was not a fluke. I will show everybody that I will bounce back from that loss and win my next fight. I have no problem taking this fight. It’s not a mistake at all. This is what we do. We fight. I’m very excited for June 26, and I expect Lubin to bring his best.

“I actually watched the Charlo fight for the first time last night. Obviously, I learned from my mistake and worked to correct it in this camp. I’m looking forward to showing what I’ve learned from that defeat on June 26.

“At 154 pounds, I can knock anybody out. I have seen some of Lubin’s fights just as a fan, and he is a great fighter. It’s not easy to land shots on him or land a home run shot. So that’s not the game plan. Obviously, there is a game plan, and if I do land on him, I feel that I can knock him out. But I won’t just go in there trying to land a shot on the chin.

“I’m the type to take advantage of an opportunity when it presents itself. This is another opportunity to get right back in the picture and fight for a title, so you have to take this. Not everybody would. Erickson did, and I’m cut from the same cloth. It’s the opportunity and the pride of fighting the best.”

“Camp is going really well. I’ve been out in Las Vegas with SugarHill Steward grinding and putting in the work. The fans can expect an explosive performance and a victory for me on June 26.

“I have to be myself on June 26. I think I’m more skilled than anyone else in the division, and I plan on proving that again against Brian Mendoza.

“I’ve known who Brian Mendoza is. I expect him to get beat. He’s a decent fighter, but victory is the only thing on my mind.

“I don’t want to talk about what happened before the Rosario fight because it’s in the past. I don’t want to make any excuses. It wasn’t that I didn’t focus or train hard. Right now, I’ve had a great camp, and I’m prepared to win.

“With me, you’re always going to see a hungry and focused fighter in the ring. I don’t know if I’ll look much different. I think with a new coach, and it takes some time for the changes to start setting in.

“I went through a four-week training camp before my fight in December was canceled because I got COVID-19. It was almost a full camp, and it definitely kept me motivated going into this next training camp for this fight.

“I’m the best fighter in the division. I just lost, that’s all. LeBron James and Michael Jordan had bad nights; I can have a bad night too. I’m still the best in the division, and I’m anxious to get back in the ring.”

“Training camp has been going great. I’m out here in Las Vegas, too. I’ve just been grinding. This is a tremendous opportunity for me, and I plan to take full advantage of it. Everybody can expect one hundred percent and everything I have in me.

“It’s not about looking back at the one blemish on my record and crying about what happened in the past. There are always a million excuses behind the scenes, but it is what it is. I learned from that loss, and you guys have seen the change in my performances since that fight and how I was more comfortable at 154 pounds in my next fight. I feel like this next fight will pull out even more from me. You guys will see another big jump in my skill level on June 26.

“I feel like I’m catching Julian Williams at the right time because of where I am in my career. It’s about me. This is the right time. I’m 27-years-old, and I’ve been a pro for many years now. I feel like the schooling that I’ve had is really starting to come out, and I’m hitting that next level. I’m not worried about what’s going on with Williams. I know he’s still coming with everything he has to prove that he still has it and that he’s still in the mix.

“A lot of people get to this point, and they get a big fight like this, and they think they’ve made it. They get happy to be here, but you won’t see that at all with me. I’ve always visualized being at the top of this sport and climbing to the very top. I’m taking full advantage of this opportunity, and you’re going to see somebody very hungry on June 26.”

“This is a really terrific card from top to bottom. Julian Williams is one of my favorite fighters. He’s a former unified champion who’s going to take on the tough Brian Mendoza. Williams is looking to make a big statement that he’s still a force and that he’s ready to get back in the mix with the other top 154-pounders.

“The co-main event could be the main event on its own. With Lubin and Rosario, we’re really excited to see who will emerge from that fight, ready to challenge for a world title once again. We can’t wait for June 26.”