After the fight, Tommy looked like he was about to cry while giving an interview with BT Sport. It’s starting to sink in with Tommy that he will not be a world champion with his limited skills.

Tommy is the younger brother of WBC heavyweight champion Tyson Fury, but he clearly didn’t show anything close to the same of ability tonight.

Fury spoiled his way to victory

It was a really awful performance for Tommy, who was lucky to get a win in a fight that deserved to be scored as a draw or a win for Grant.

This was not one of 22-year-old Fury’s better performances, though, as he spent much of the time retreating, clinching, and spoiling against the stronger fighter Grant.

Referee Shaun Messer scored it 40-36 in favor of Tommy Fury, but you can argue that the fight should have been scored a draw. Grant, 23, appeared to win rounds 1 and 4, largely due to the powerful shots that he was connecting with.

In the second round, Tommy literally turned his back and ran from Grant in a move that looked amateurish, to say the least. It was fortunate for Tommy that Grant didn’t brain him in the back of his head while he was running. That would have been a disaster for Tommy.

Fury was doing a lot of holding, running, and not standing his ground to fight Grant. When Grant would close the distance, Fury frequently grabbed him in a bear hug to keep him from punching. Frankly, it was hard to watch the spoiling from Fury. Tonight, his fighting style was similar to Hughie Fury’s on one of his bad nights. Hughie is a lot better fighter than Tommy showed tonight.

It was a lot of spoiling for Tommy, and he didn’t look like the same guy that had been calling out YouTuber Jake Paul lately.

Based on how Tommy Fury fought tonight, you’d have many boxing fans that would favor Jake Paul to knock him out. Jake is clearly the much bigger puncher and more advanced as a fighter. If Tommy were to take the fight with Jake, it worrisome for him.

“I think people just need to take their time with me,” said a frustrated-sounding Tommy Fury after the fight. “I had 10 amateur fights. Like I keep saying, this is not a sprint; it’s a marathon.

“I’m learning every time. I learned more in those four rounds than I did in the rest of my five fights. Definitely, I’m trying to get better every time, and as I said before in the press conference, there will be improvements the more I work.

“Listen, I’m not nowhere as good as Sugar Ray Leonard, and I’m not claiming to be. I’m Tommy Fury, and I’m trying to do the best that I can do. This is a marathon, and I’m going to take my time and go through my apprenticeship very properly,” said Tommy Fury.

Other results on Saturday’s card: 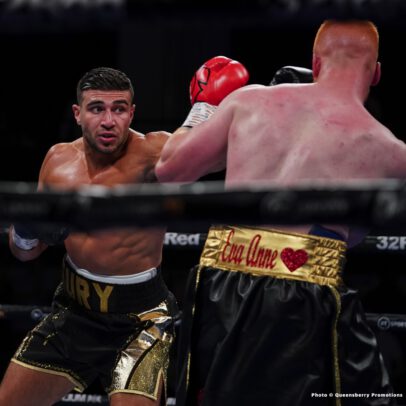 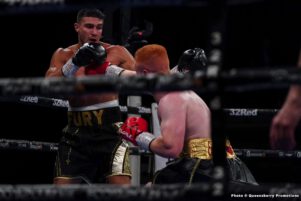 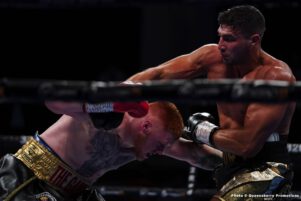 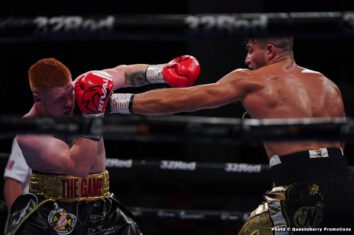 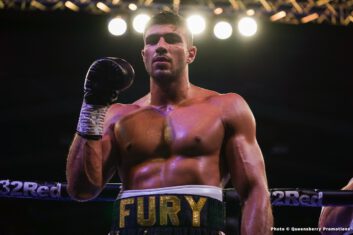